Post news RSS Map v3 is in the works!

S.C.R.A.P.'s map is entering its third iteration. I talk about the changes to the game introduced in the 3rd iteration of the map.

S.C.R.A.P. is the first game I've built as an adult, and as such it's entailed a long and at times arduous learning process. Nowhere is this more apparent than the design of the game's map.

The earliest version of the S.C.R.A.P. map was a chaotic grey mess. I had cliffs, narrow alleys, and numerous unused and unusable areas. Just implementing it from my sketches taught me a lot about how much *stuff* would fit on an RTS game map, and the dangers of over-concepting while under-implementing. 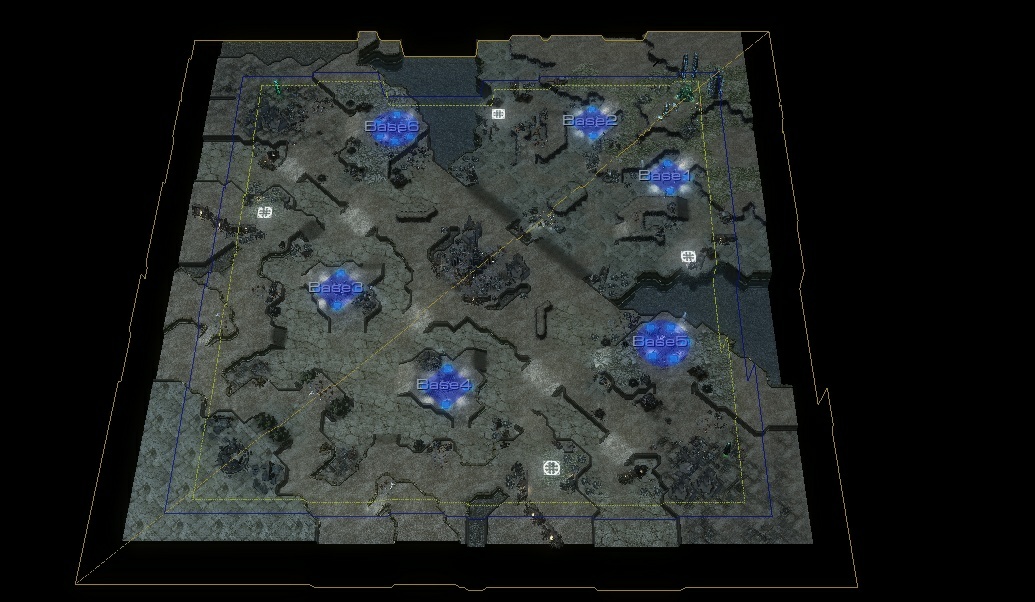 The second version of the map was better. I simplified the terrain and cut back on dead areas (though there still were several). I realized that I needed to give more thought to how players would move about and think about their play space. 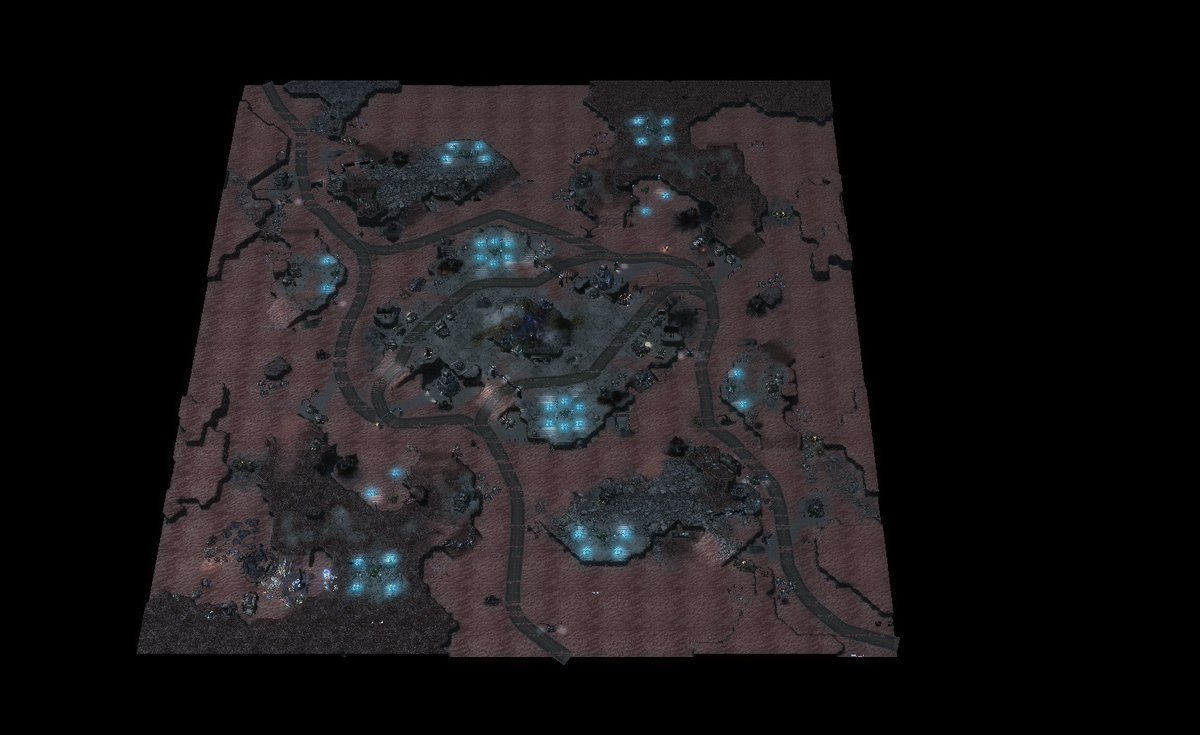 Version 2 of the map cemented my commitment to a 'rotational' design of rough and interconnected concentric circles, with higher-value but higher-risk areas deeper into the map. I learned a lot from Map Version 2 about how players would be interacting with the various obstacles they'd be confronted with, and how they approach the game's win condition. 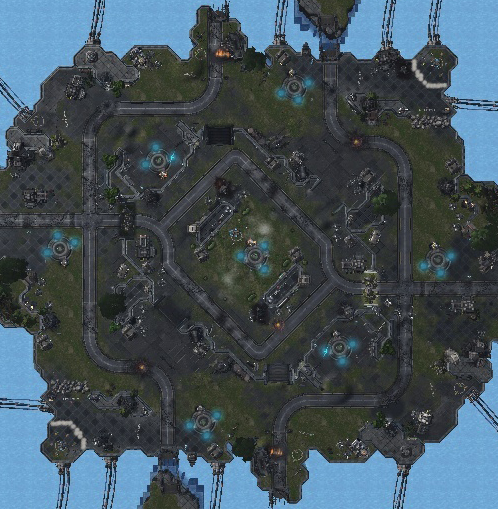 This new version of the map manages to address another issue in previous versions, as well. S.C.R.A.P. has "creep camps" - neutral enemies that drop resources and even Data (victory points) when they die. Previous versions of the map allowed for players to easily stumble across a Creep Camp without realizing it. Now, they're more discoverable (I've put in terrain markings that warn about them, and show their exact location) but out of the way so you don't stumble across them and lose your army. 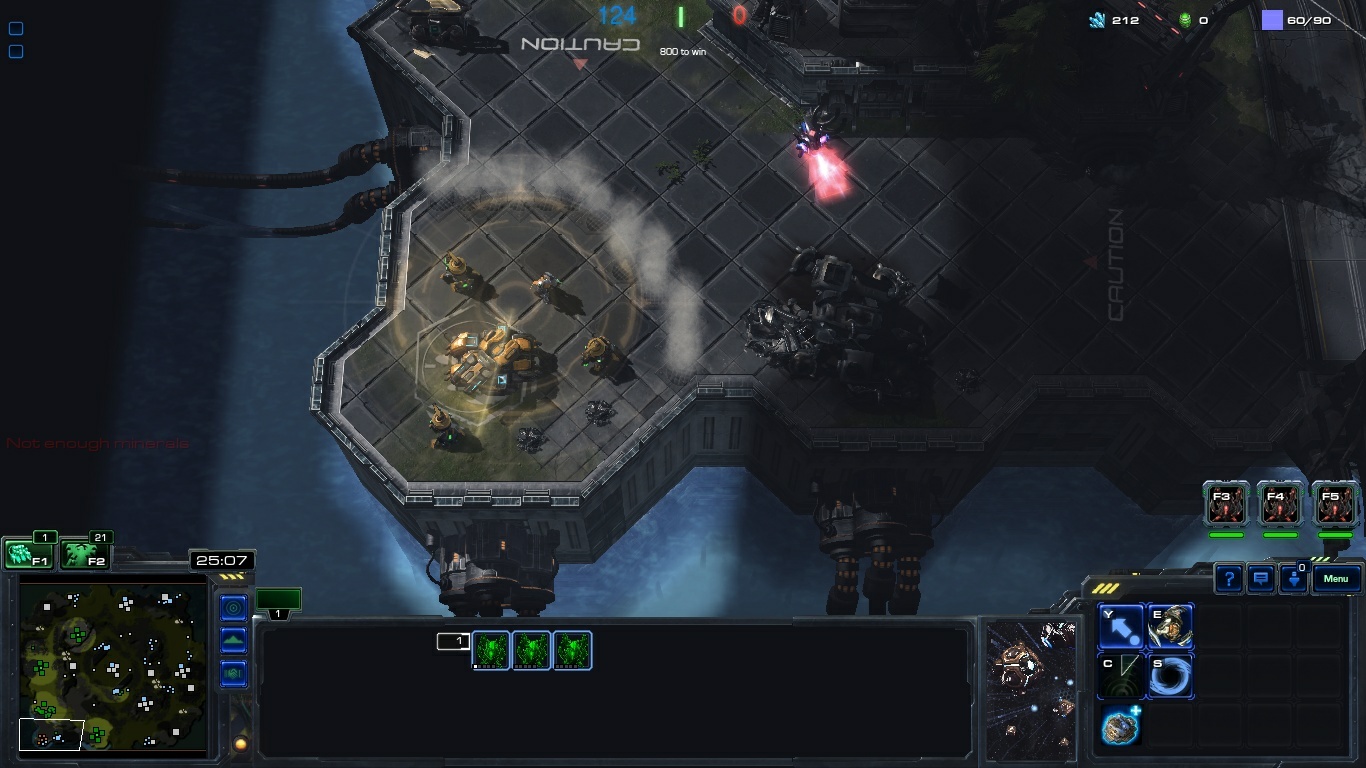 Similarly, I've streamlined how Bases work. In previous versions of the mod, a "base" could consist of 2, 4, or 4 build slots. Testing, and changes to the game's tech trees, resulted in discarding that in exchange for a single base type: 3 build slots and a Data Conduit. I'll talk about that in a second. 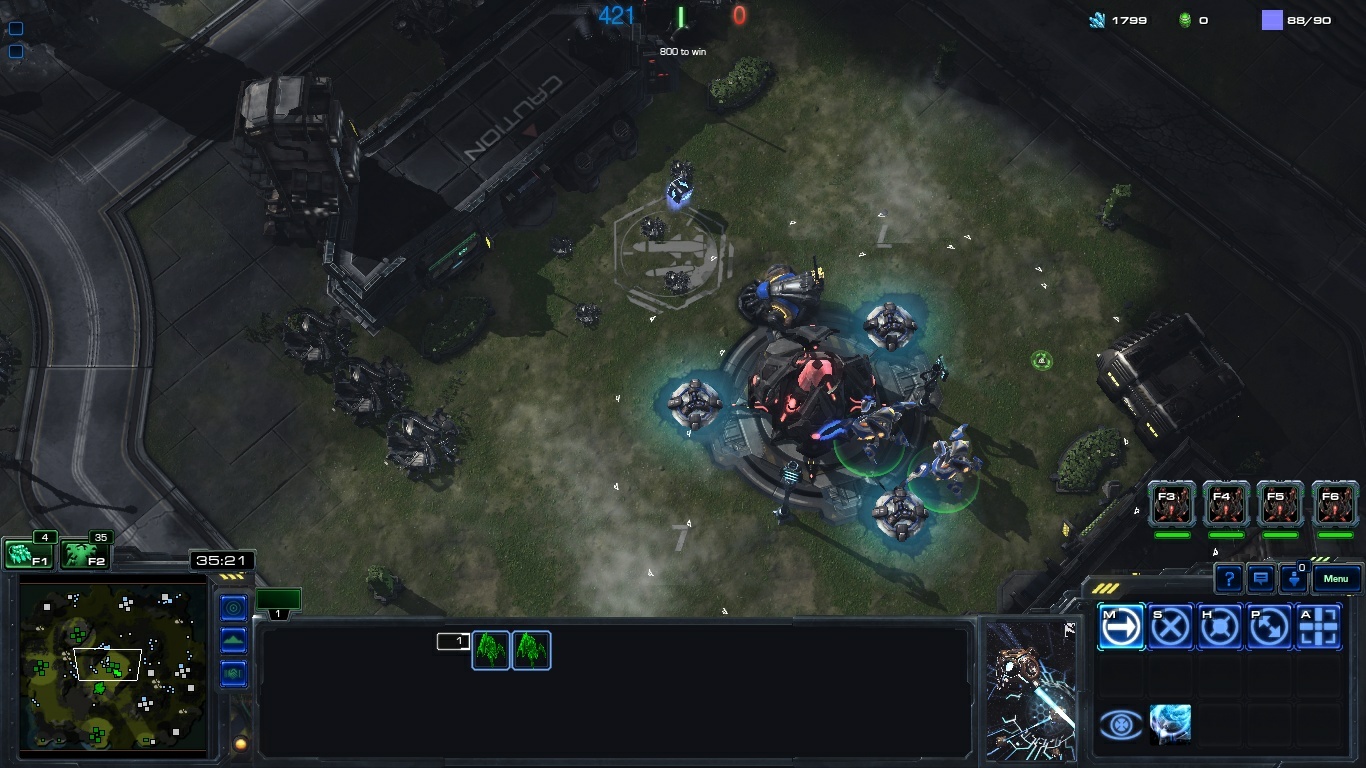 In S.C.R.A.P. players are competing for control of scarce resources: Scrap metal to build additional 'bots, Energy to power them, and Data to inch themselves closer to sentience and dominance of the wrecked and ruined world they inhabit.

Scrap is found out on the game map; 'bases' are the source of both Data and Energy. This geographic distance between

In earlier play testing, it quickly became clear that no one was paying attention to the game's win condition. Not even me. In Map Version 2, the game had discrete points that, when captured, would generate Data for the owning player. Because they were so out of the way, no one ever bothered to capture them. Because they were a passive objective in an active game, they were ignored.

I also had real trouble getting players to want to expand past a single base: Once the player grokked the basics of base functionality, they would still "camp" out on one base as long as they could, either not moving out over time, or doing so only after a substantial delay. Seeing as mobility is one of the core aspects of my game, this was not optimal behavior. 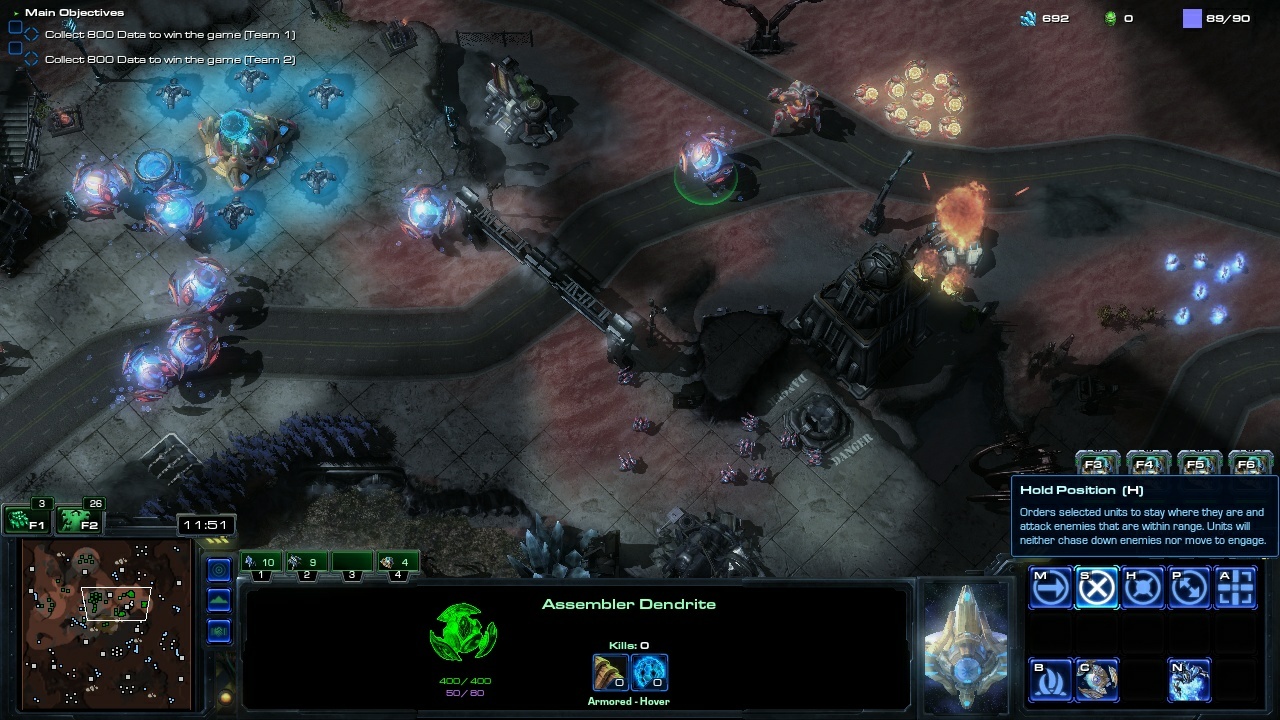 In older versions of the map, 'base' or generator locations had variable properties. Some controlled Data Conduits, which would generate victory resource over time. Some had 2 Power Nodes, some had 4, and some had 6. As I mentioned above, no one bothered to ever attempt to capture the Data points, and the large number and variable size of generator locations didn't seem to add much to the gameplay. 2-node Generators, which I added as a way to subtly force players to move on and expand early, felt overly restrictive, and 6-node Generators (pictured above) could house ever structure a player needed, and more. They felt too high-resource in a game about constrained resources.

I've settled on a common layout that will be shared by all generators: the Generator Wreck in the middle anchors the location, which has 3 Power Nodes and a Data Conduit. This means that each generator location is exactly equal in terms of its value to the player, and also serves as a source of victory points. The intent is to have as understandable system as possible, as well as having each generator location provide only an incremental impact on a player's overall access to the features of their faction. These locations are intended to change hands fairly often, so asking players to commit too much to the maintenance of each one would have had a detrimental impact on the game. I'm hoping that 3 Power Nodes each is the Goldilocks Zone of my game: not too much, and not too little. 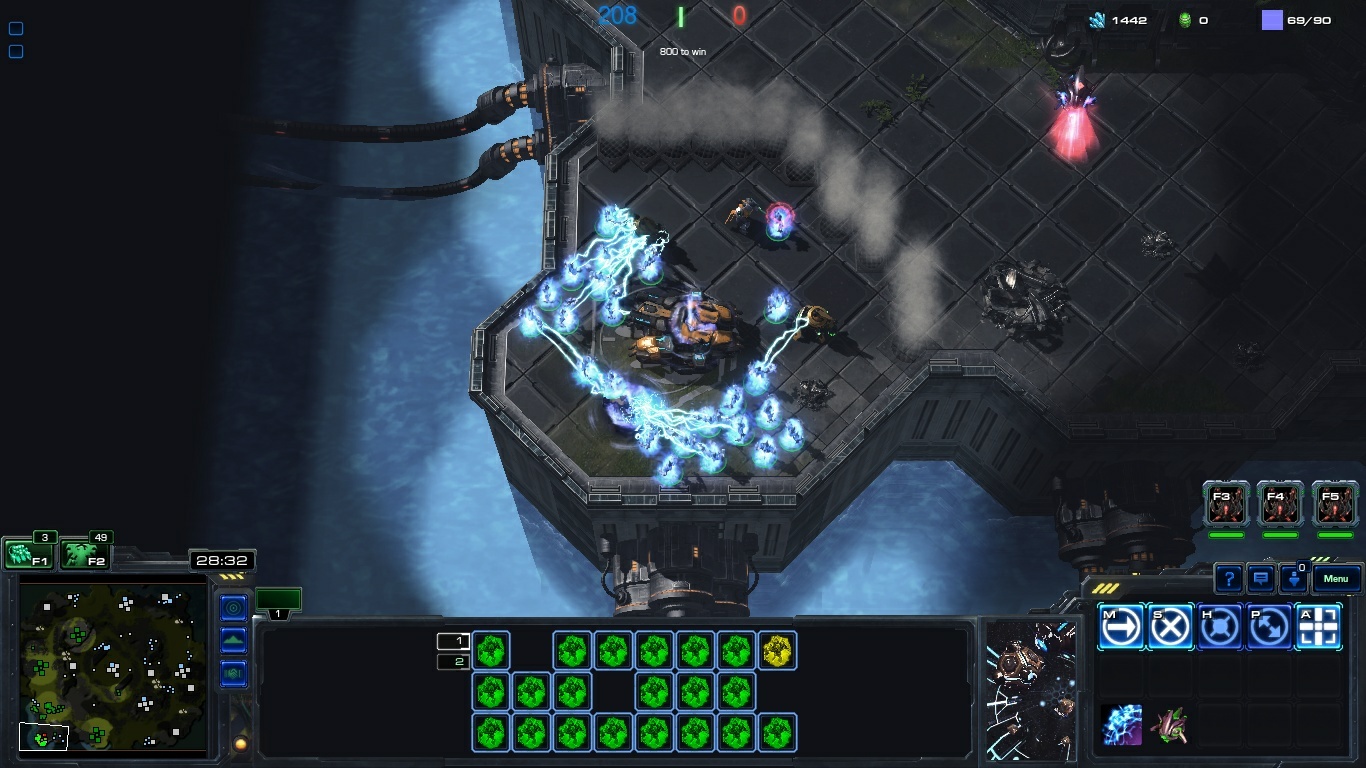 In previous versions of the map, Creep Camps were a contentious feature. Players stumbling onto them would often lose entire armies, and it was possible to accidentally cripple yourself early in a match with little warning. This version of the map is designed with lots of little nooks and crannies and out-of-the-way places for the Creeps, allowing the player to meet them on their own terms has been a big step forward in terms of how friendly my game is for new players.

I'm really excited to get some fresh blood into the mod, to test the new map and the new victory mechanic.

As long as the ramps allow for better unit collision, this basically fixes every problem the old map had. I'm fairly sure that this will have taken the gameplay to a new level. The generators in particular make more and more sense the more I think about them.