Choice cubes. What are they and how are they made? How do i choose?

The Making of a Choice Cube

Hello again! I'm Robin Holm, the Lead Designer at Guru Games and it's time for another Development Blog. This time we'll talk about the Choice Cubes which can be found in Magnetic: Cage Closed. You can read all of our previous devblogs at our website: Gurugames.se. Feel free to comment and discuss the design process with us, we love feedback!

Making Choice Cubes for Magnetic was one of the most interesting part of the design process, but also one of the most interesting parts of the game. The idea of these chambers was to contribute to the narrative progress of the game, to branch out the story and to give the player a feeling of control in where he, or she is heading. In order to make this effective, you both had to work with the story for the particular chamber, but also with the level design and the atmosphere in order to make sure that it felt like a break from the ordinary chambers and that you actually understood what the choice is all about before moving on.

Making the story for these chambers was a long and hard process. It's not just about making a choice and moving forward. You somehow need to make the player care what choice he, or she makes and that the choice they made actually mattered and affected the game. In order to make this we made the Choice Cubes, not only about making moral choices, but also about progress, allowing the player to choose which path to continue on, or cognitive abilities, such as paying attention to your surroundings.

Three paths, which one will you choose?

Three ways out, each path leading to a different road for your journey. One is dangerous, but fast, another is long, the last one allows you to give up. Which one would you choose?

When the Choice Cubes gave a more direct feedback on the game and wasn't always about invisible characters and moral choices you knew nothing about, the Choice Cubes felt more relevant and more like a part of the actual game where you as a player need to make a choice and not the players avatar.

At first when we made these chambers, they were usually just large rooms with two or more buttons in them. The narrator read your question and you'd answer after you had heard the entire voice clip. We thought this felt boring and empty though and that you could do much more than just make a large open chamber. Therefore we looked back on what levels and settings we already had and how we could work with these to make the Choice Cubes more interesting.

We decided to let our Prison Psychologist be in charge of the Choice Cubes, instead of the Warden that had previously taken care of everything. Earlier the Prison Psychologist had only been active during the tutorial of the game and we felt that she needed to be in the game more for her to be an interesting character of some sort. With this change, we also changed the structure and level design for our Choice Cubes to look and feel just like the earlier tutorial levels, with the same kind of architecture, lighting, sound etc. The reason for this was to give the Prison Psychologist a certain "look" and "style" in the game and also to allow the player to understand where they were as soon as they entered a Choice Cube, marking the end of a certain tier (A tier is a collection of levels with a certain graphical style and difficulty). 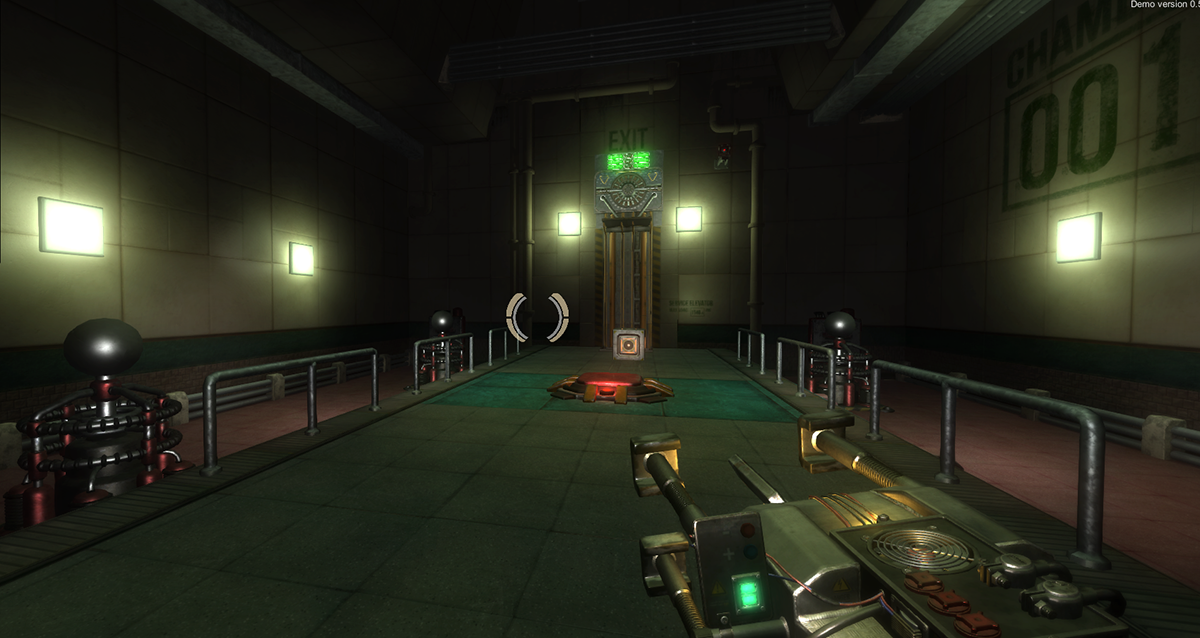 Example of a Tutorial Level 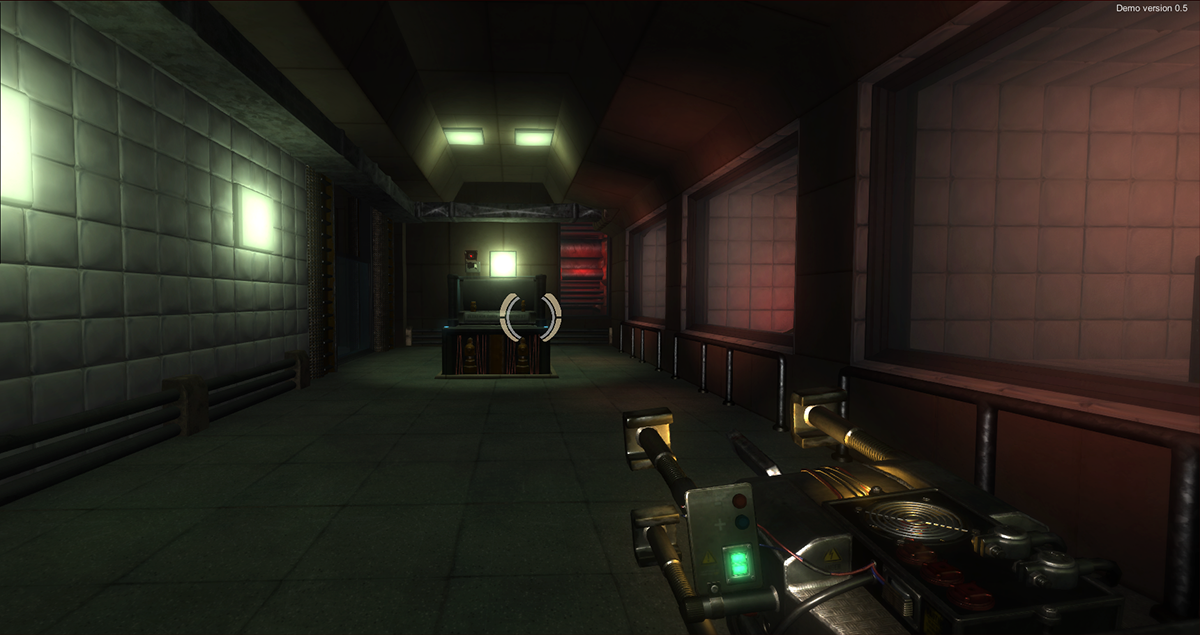 Example of the first part of the Choice Cube

Empty corridors still felt boring though and we wanted to add something more to the Choice Cubes that they gave them a certain look. The idea that came up then was to create "monters" in which we can show objects, or scenery relevant to the choices you can make in the chamber. This was inspired by museums, where you can see cool stuff behind a window bar relevant to the history you're learning about when visiting such a place. 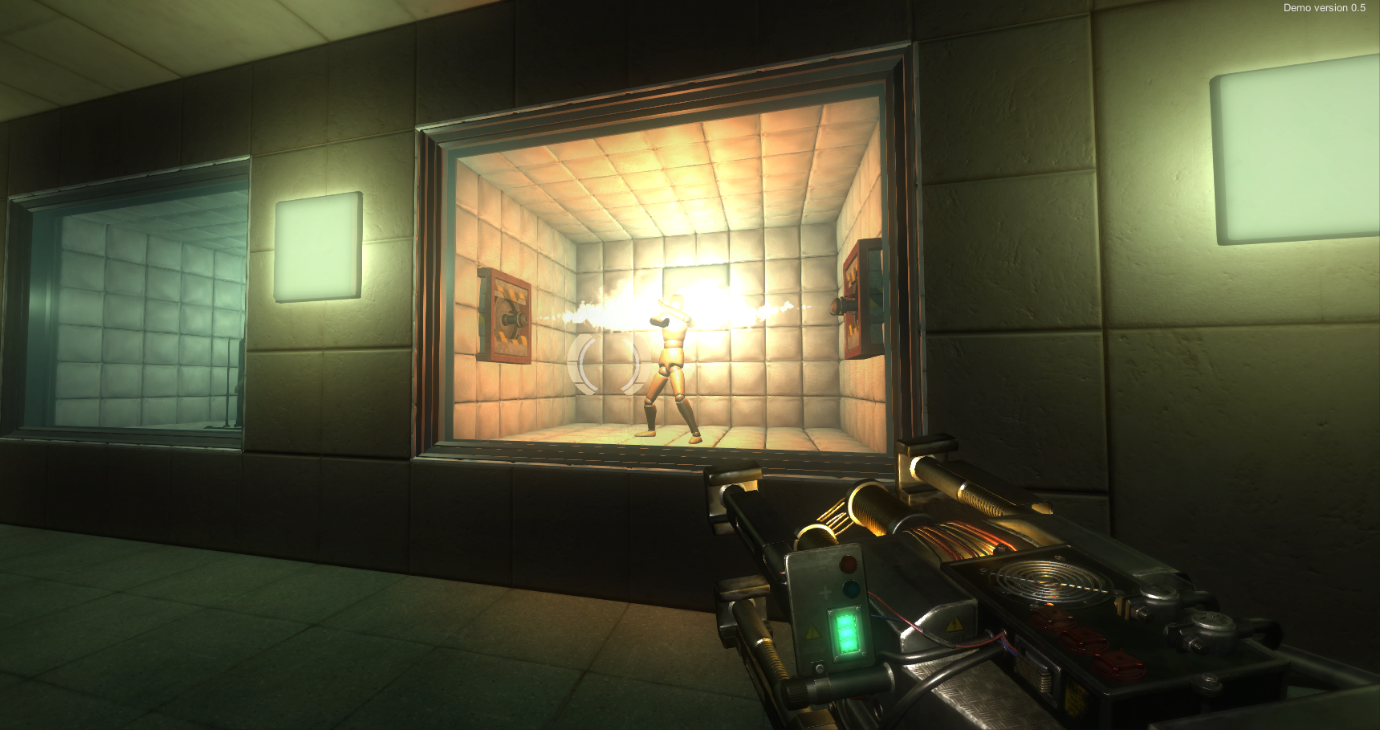 Example of a Choice Monter

After the player has listened to the voice clips and done everything it wanted at this area. They can move forward into the actual Choice Room, usually located the floor under the entrance room. Depending on what choice the player makes, the story will branch, sending the player to a specific level, other voice clips for the story progress, or even giving the player a bad ending. 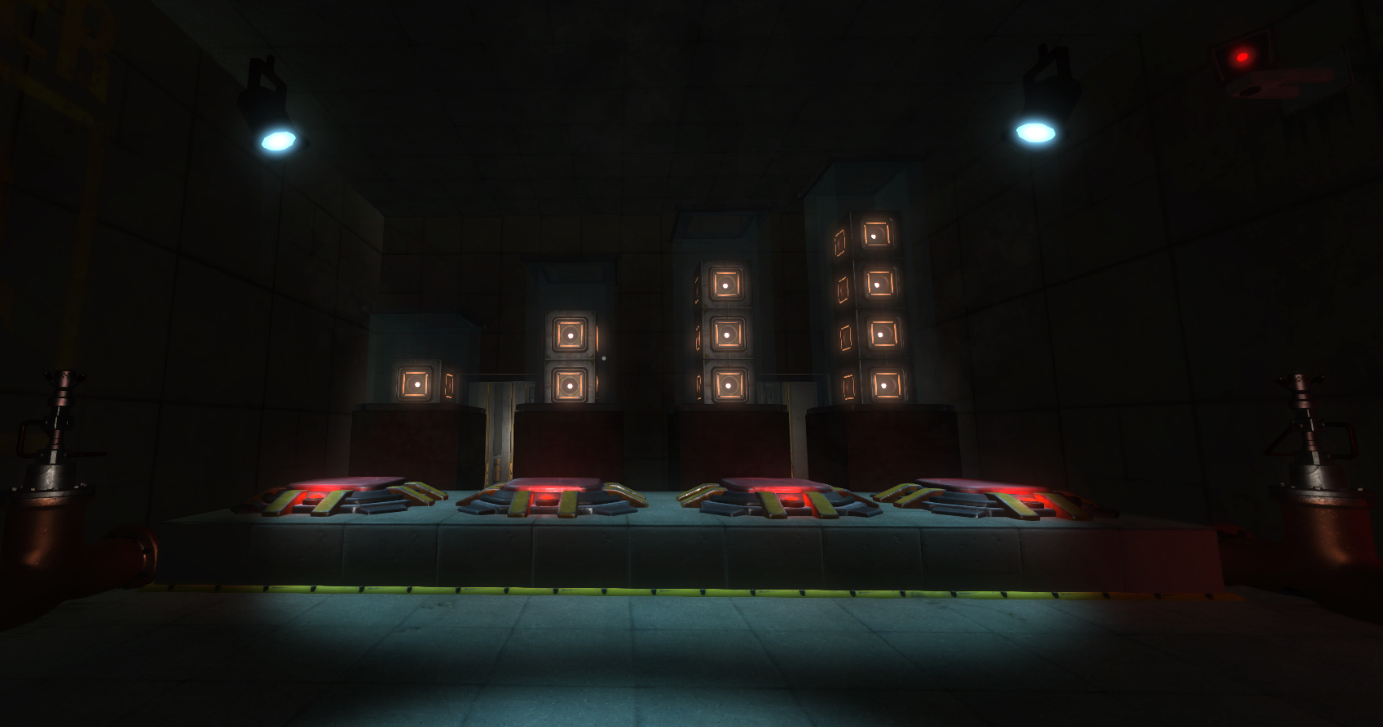 Example of a Choice Room