The beginning of 0.0.8.xR is happening! this is all about making the game playable! we are working on stuff from formulas to hp and mp, all the way to damage formulas and item drops. we will change some textures and make a lot of random changes.

Well, a lot! this update will make the game playable mostly (without missions or city) focusing on character progression.

This also includes Monster-maker for us to use (along with modderss! so stay tuned modders!) - this took the longest, It...

we are also adding new textures, (coming up in next article) and a new monster that will fit better into the game's current environment!aa

There are also a lot of improvements in the character stats as well (included in this article) so keep on reading!

This was made for people besides the programmer (me) to use to analyze the basic character stats until we get everything done and ready by our artists (should be soon.)

I added one basic HUD on top left which shows the level of the character, hp out of max hp, mp out of max mp, and xp out of xp needed to level up. everything updates itself so it makes it easier to analyze the character's situation on the go. 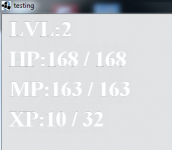 we also added another bar about the character's head for more of a graphical view, the new bar is the XP bar and will show the amount of xp you have.

This is probably the most important feature in this update, the beginning of character stats! for now all we have is hp, mp, speed, and jump force calculations but we have also made sure the structure for the rest of the stats is ready to be implemented. We programmed a new formula for health, mana, and experience (temporary) and will finalize it by the end of this version code. next we will include calculation of damage, defense, and everything else. we are now working mainly on clothes stats and structure for that. then we will work on integrating that with the character's native stats and giving a final result.

Our goal is not to make the user focus on just one stat, but to spread out and create the best character that represents the user's favorite feature, it can be an agile warrior with heavy armor, or a magician with a lot of health but very slow. it all depends on your preference. You can depends on your skills for transportation like teleportation and then just focus on your INTL so you will have enough mana to use it as much as you want.

We did a short AMA the other day and found out our programmer's favorite soup!
if you want to participate in the next one, make sure you follow us on twitter! we will publish an update there when we do it, and also feel free to request one from any of us!