Hope you are doing great!

We have been working a lot since we launched the Early Access several months ago on Steam. We listened to you, and other new members of the community and the feedback we got was -and still is- awesome!

We implemented a lot of the things you suggested. Some of these suggestions were already on our pipeline but some others were ONLY added thanks to you. So thank you one more time for participating in this open-development with us.

Our goal of doing a Kickstarter and Early Access to keep developing the game together was a complete success already! We hope you feel the same way and that you are satisfied with the changes we implemented so far, and how the game is shaping to its final form.

Speaking of the features we wanted to have in the game, we can also say it is almost done. With this new update we are releasing today to Steam we can say we are officially in "Beta".

Of course we have an endless list of things we would still want to do, and we could keep developing this game almost forever. However, we are happy on how the game evolved and that it has a lot of our initial vision and scope on it, and even more, thanks to your feedback. Don´t get us wrong, we still need to do more stuff to call the game "finished" and transition from "Early Access" to "Full Release". But just looking at the features, there are not many more we would like to include on version 1.0.

We wanted to have, and also need some time to iterate, polish, balance and still add some more content on what we have so far, instead of keep adding more features. This is the main reason, we decided to go into "Beta" mode now, which basically means to us, not adding any more major features. It means just focusing our efforts on: iterating minor features, polishing, balancing, adding content and fixing bugs.

Depending on the success we may have with the full release launch, we will be able to add more content/features on future updates.

Below, you will find the new features and "stuff" we added into this new build:

Unconscious State
We added this "Character state" in order to add deepness to the tactics, but then realize it would be a nice feature to add to our main characters (that cannot die in missions, because of their importance in the plot).

Something that "(Tchey)" mentioned and some other members of the community too, is that loosing the mission because the main character died, could affect the way you play in a negative way, because you would be playing very careful with him.

So now, all your main characters, not only Herk, will be unconscious if they reach cero HP instead of just dying.

You will be able to revive them if you have the CPR Kit and some spare Action Points during the mission. And if you don´t have one, they will recover and join your caravan after you end the mission successfully with your remaining characters.

Be advised this will only happen with the main characters. If you are playing with a recruited character, he can also get unconscious when he reaches cero HP, but if you don´t perform CPR on him within 3 turns he will die forever.

Also have in mind that your non-main characters may die when their HP reaches cero instead of being unconscious. It will depend on how hard you were hit and a chance based on your "Vitality" stat.

Burning Death
We added a new way your characters and enemies may die, which is "set on fire". This death can be caused by any weapon that has fire, such as the flamethrower or any "explodable" weapon such as grenades or rockets. We hope you enjoy watching the characters be cooked to death now and "Happy cooking!" 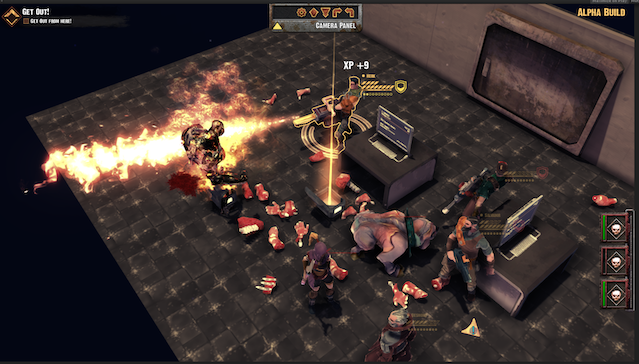 Journal Entries
We added a new feature to provide more content to the Backstory of the game. In the different maps you will find some "Terminals" that will offer you additional Backstory on the Fallen Universe. This can be in the form of text, pictures or old radio transmissions of the past that will help you understand better what happened, and why everything is like this, in the present day. We added an example of this in the second mission of this build, but there not any more to not spoil the story. 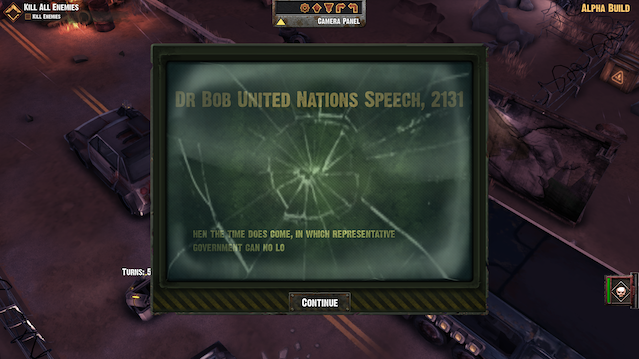 GUI in 1080 and improvements
We changed all the GUI to 1080. When doing so, we also made some improvements on some of the screens and menus. We still plan to iterate on the GUI a bit, but we like what we have right now.

Some of the screens we improved below.. 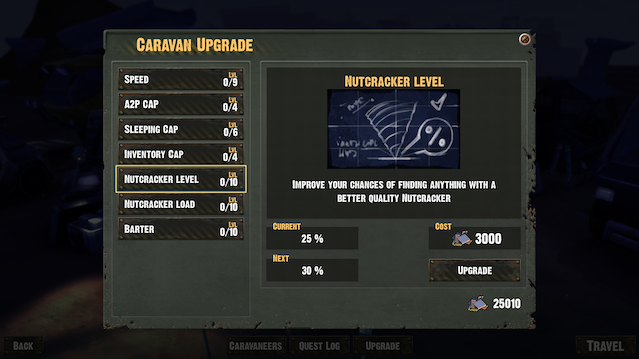 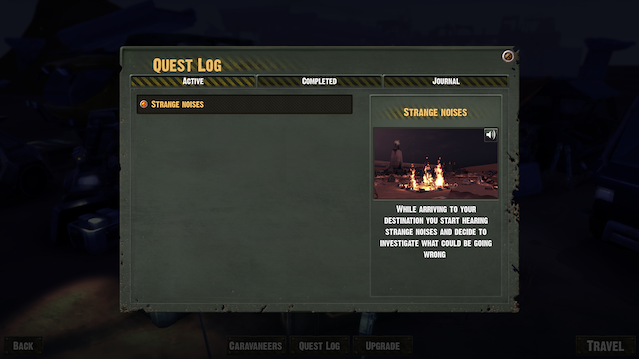 AI iteration
We iterated the AI so that the enemies can now perform "Overwatch" and throw grenades at your characters. We also made several changes on how they use their weapons so they can be smarter. More iterations will be made on the AI before the Full Release, but we are really happy on what we accomplished so far, so we hope you like it too and find it challenging enough to have several hours of fun while unveiling the Main Plot.

Enemy characters
We changed the settings of the enemy characters. We tweaked their inventory and their stats. We still need to balance when each one of this characters will appear on the different missions, but now it will be easier for us to balance all the levels.

Working in the background...
We are working on several stuff besides the things we already mentioned, but you will not see these until we do the full release. For example: The 2 maps we told you were "secret", + polishing the final script, new characters and some other surprises.

We really hope that our next update can be the full release of the game. We will be working hard on polishing, iterating, fixing, adding content so we can do a successful full release soon. We will rather focus every minute we have on doing this, instead of doing more partial builds, so this will be our last public update until the full release.

If you still want to try the game as we will certainly be doing, and maybe be exposed to spoil the story or experience nasty bugs, you can play the game on our Private Beta branch. For most of players we don´t advice this, since you will not have a nice ride, but Hey! after all, it´s your call, so if you want to try the game the same way we do, please join us.

In order to activate the Beta branch on Steam: 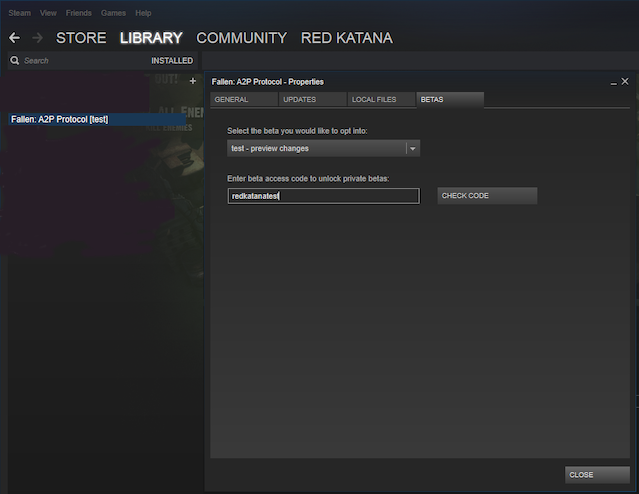 1. Go to your Games Library on your Steam Application

5. On the textbox asking you for a code, add: "redkatanatest" and then press "check code".

6. Now you are all set to play our private Beta. You will very likely need to update the version of the game (Steam will start the update automatically most of the times), so be sure you do that before hitting play.

7. You can always go back to the public branch of the game by selecting you "opt out" of all the beta versions from the same menu.

Let us know if you have any issues setting this up in case you want to try it.

Please don´t forget to help us spread the word, so more people join our AWESOME community, and collaborate to deliver a better game together.