Hello all this is Cursed Emoji here, Lead dev on Lovac: 2063

So first things first THIS MOD IS NOT CANCELLED. I apologize for the Radio Silence however I am making this post in the hopes that you will all understand. Some of you may recall last year at the very end of the Alpha build where I explained in a voice clip that I had some commitments to get to that would get in the way of developing this mod. In all truth these commitments were in fact me joining the Military and I knew that I wouldn't be able to develop the mod while in Boot Camp which is for one why I released the Alpha so hastily as I was going into Boot Camp just days after the build came out. So anyway I graduated and for the last 6 months after have been very busy on things I could not split my attention away from. As a extension to that I also was a little disheartened by the reception the mod got since I put so much hard work into giving the mod a unique spin on the whole HL2 modding scene. So to say the least I wasn't feeling motivated to work on the mod. Although now I feel the heat has died down, I've been able to gather constructive criticism and apply it to the mod. And I feel I owe a debt of gratitude to the youtuber doitall who played my mod on his channel and supplied some extremely helpful and encouraging feedback.

Anyway back to the subject of work. All these months later I have found myself in a golden period to develop this mod where I can work and develop without one side of my life affecting the other for the next several months. So what does this mean for the mod? It means that we are back on track and that there will be some changes based on everyone's feedback.

Some of these changes will include:

Slight art style redesign of the Tower interior. A major point I got from the Alpha was that people were not a fan of how I made the maps to resemble the GldSrc era of Half Life mods with people saying they were simplistic or ugly. Now I can say that both of these points were on purpose however I will be working to improve texture quality to create a more streamlined simplistic deco design to the tower. My current thought process is Simplistic World + Streamlined Simplistic textures = Simplistic Style of Game.

Less interruptions to gameplay. I will not lie, This mod is story heavy and at times is too story heavy to the point where the player just jumps around waiting for dialogue to end. I'm currently working on 2 solutions to this problem.

Solution 2: Make dialogue less invasive and more interactive. A major point for this one will be the CEO's audio logs. I'm experimenting with the idea of the player being kind of virtually sucked into these audio logs to be visually shown what the CEO is describing. I'm not sure It's just a thought.

This is about a day of work. But my second wind has also encouraged me to experiment with more interesting gameplay scenes such as this one. 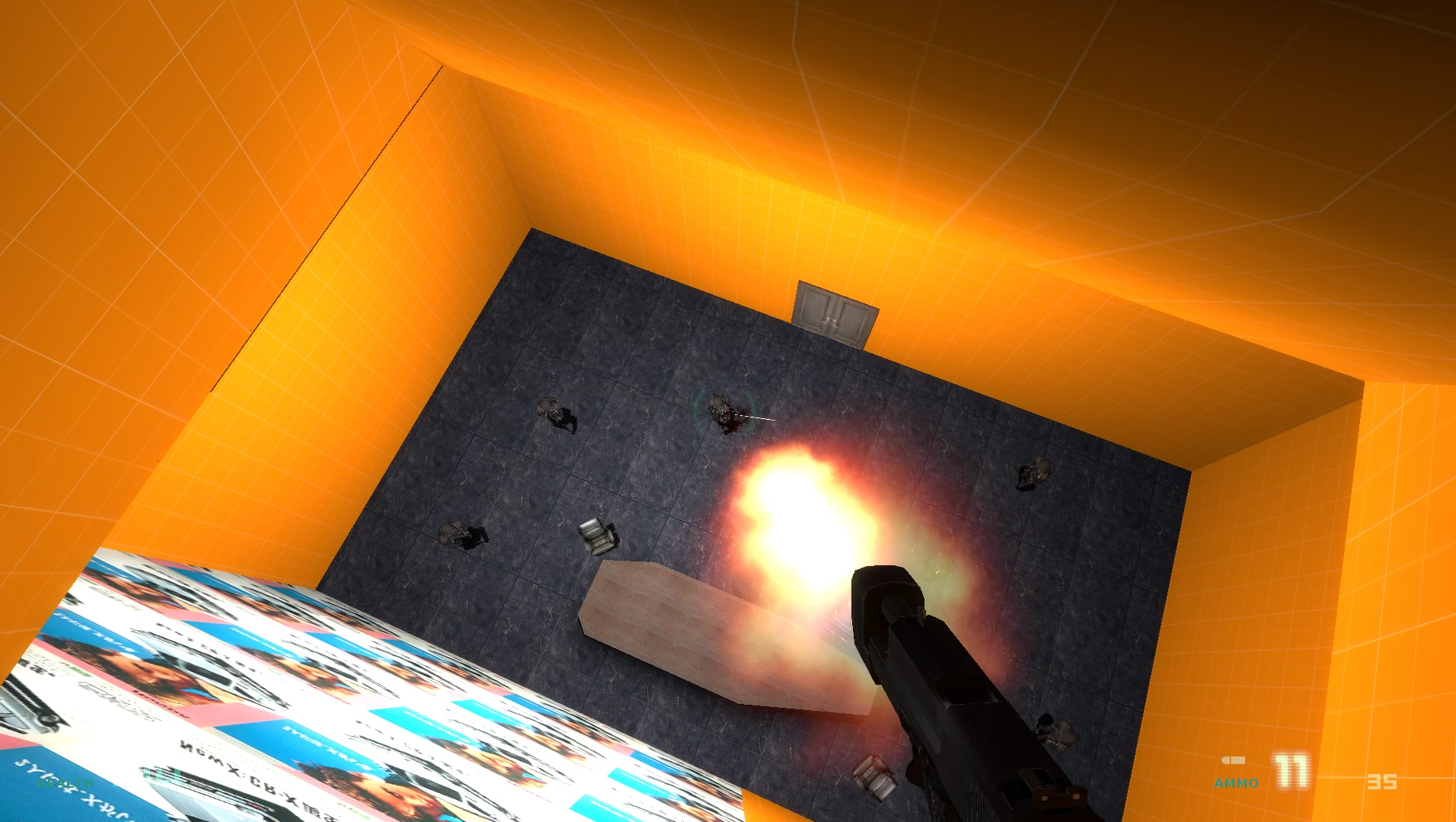 Yes I know very early days but the idea is the concept. In this scene you will fall through a glass ceiling and be put in to slow motion as you try to eliminate the hostiles before hitting the deck Max Payne style. You can expect a roller coaster of exciting/surprising moments such as this throughout the campaign.

Anyway to finish off this way too long update I would just like to say this one thing. Lovac: 2063 is a passion project for me. It's like and Ex Girlfriend that I regret breaking up with the second I leave Her. And all of you supporters only further this feeling. To plainly say it thank you for your enthusiasm for my ideas and stories, I'm putting my heart into this mod so I hope you'll be able to feel the passion when you play through the full thing.

Stay Tuned for updates on the Siege of Greyline Tower!