There was a nice surprising waiting for us when we got into the studio this morning - Lost Sea has been greenlit! Thanks to everyone that voted for us, it's brilliant news and I thought I would write a bit about our experience and, hopefully, share some insight into the process.

I'm not going to lie... it was a pretty nerve-wracking month for us. Since we are coming from a console background and are already approved for PS4 and Xbox One (which have always been much more closed platforms) Greenlight feels a bit like this weird popularity contest you have to go through to be able to sell your games. It's like there is a bouncer at the door of a shopping mall who asks random shoppers "hey - do you think you'd buy something from this guy". 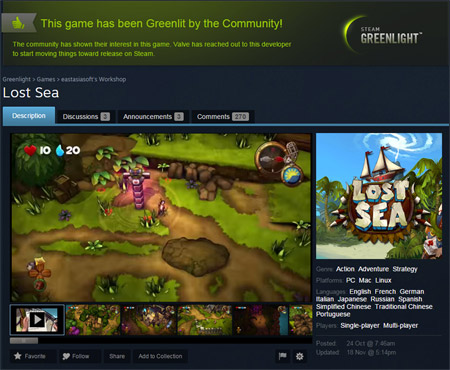 Here's some things we picked up along the way which might help your game get greenlit a little easier:

1) Focus on converting people inside the Steam client

While it takes very little time to put together a direct link, or drop a mention of Greenlight into your existing marketing I suspect the vast majority of votes come from inside the client. We seemed to get a spike in traffic the weekend we were featured in a Greenlight list on hardcoregamer.com, but the site has around 15k unique page views a day and it only translated to an extra ~200 views / 50 yes votes a day. Even if you add up every player and person who took a leaflet at PAX, Twitter and Facebook followers it would only make up around 30% of the total yes votes.

Ensure your thumbnail is to an exceptionally high quality, and is eye catching. It's what people need to click on and is most likely going to be on a page with a bunch of other games. Also, ANIMATE IT! The vast majority of thumbnails are just static logos or artwork - ours included! Make it an animated GIF with the game logo screen and a few frames of game footage. (~2 seconds of logo, ~5 sec gameplay). Not only does it naturally attract the eye, it also communicates a bunch of information about the game immediately. The camera angle, the art style, the genre, and so on. If I had to re-do our submission this is the first thing I would change.

Since the trailer plays automatically when a user clicks on the thumbnail, make sure to have a kickass trailer that launches into gameplay footage as soon as possible. You literally have as long as it takes for someone to find the mouse cursor and put it over the pause button. I've seen trailers that take 10 seconds to get into the action. It needs to be more like 2.

Research games similar to yours and track down fan groups that exist within the Steam client. Get them on board early. They are already logged into the client are will be much more likely to check out your page since they are already inside the system. Chat to the mods of the group, send them any press kits if you already have them and ask if they will post an announcement. You might want to consider getting in with these groups before you launch on Greenlight to get as many votes as possible in your first few days.

We had a lot of languages we planned to support, something I think probably worked in our favor. Europe is joint 1st in Steam traffic next to the States. Russia is #3. If you can localize into English, French, German, Italian, Spanish and Russian, even if you have to enlist community support to help with translation, it might encourage people to support you a bit more. Brazil is pretty big so maybe add Portuguese in as well.

It seems the majority of Steam users are active over the weekend, and we saw spikes in views ranging from a 25 - 50% increase. For the best start I would time your launch to be on the front page of Greenlight during a weekend. I can't remember how long we were on the front page but it wasn't more than a day or two so starting on a Tuesday could seriously damage your chances. We launched ours on a Friday night (Friday morning in the states) and that first weekend accounted for 25% of our total yes votes.

6) This could all be nonsense

While there are lots of articles online nobody really knows what the criteria are. There have been high-profile examples of broken games that have been greenlit and there are also lots of great looking games that still languish in Greenlight purgatory. Just because we got approved with X amount of yes votes doesn't mean that is the magic number to aim for. For all we know Valve has someone manually checking the new submissions and assigning them a score, or an algorithm that flags the velocity of a given titles yes votes, or something that scales the amount votes needed depending on the country you're based in, or the size of your friends list, or your shoe size. There is really no way to reverse engineer Valve's blackbox, but you can control how you present your game and increase the chances of getting it seen.