A new screenshot and a summary of recent progress.

A couple nights ago I was taking a break playing City of Heroes. After that article I wrote that mentioned the bubbler I had a hunkering for playing it again. After playing for a little while my GPU overheated and the computer shut off. Well that's happened before so I took out my trusty can of air and cleaned out the laptop's internals a little bit. Most of the time it's just extra dust buildup that prevents the fan from cooling effectively. After I left it to cool off for a while I turned it back on.

Windows would not boot. It just refused to boot up. It does that on occasion but usually I run the system restore and then it works again. Windows Vista can be finnickey that way. But this time, no cigar. After endless tries rebooting and running the system restore I finally gave up and decided to reinstall the entire thing, taking the opportunity this time to upgrade to Windows 7 x64. (I like it a lot, by the way, except for that the OpenGL drivers for my NVidia card randomly spaz out and claim that they don't support framebuffers.) I've backed up all my data so I didn't lose anything but the time required to reinstall everything to get productive again.

It came at a very bad time because I'm trying to get another demo ready. I was originally shooting for Sunday night, but I wasn't pleased with the state that the game was in. The fun is definitely there now, but it's still in an infant state. I'm cultivating it and growing it to make it something worth writing home about. I don't want to release another demo until I'm largely satisfied with the fun level. I also want to make a bigger splash this time and attract more attention to the project, which requires a little bit of ground work. That means not getting much sleep, but hey I knew what I was getting into when I started this.

Adam came over today to talk about the progress of the game. We have a first iteration of every structure except the resource node in the game. He's done a fantastic job in making all of the buildings look unique and cool-looking. I had him sit down and play the most recent version and he built up a huge base. He was still expanding and conquering when he realized he had to go, but I quickly snapped a screenshot of his handywork. 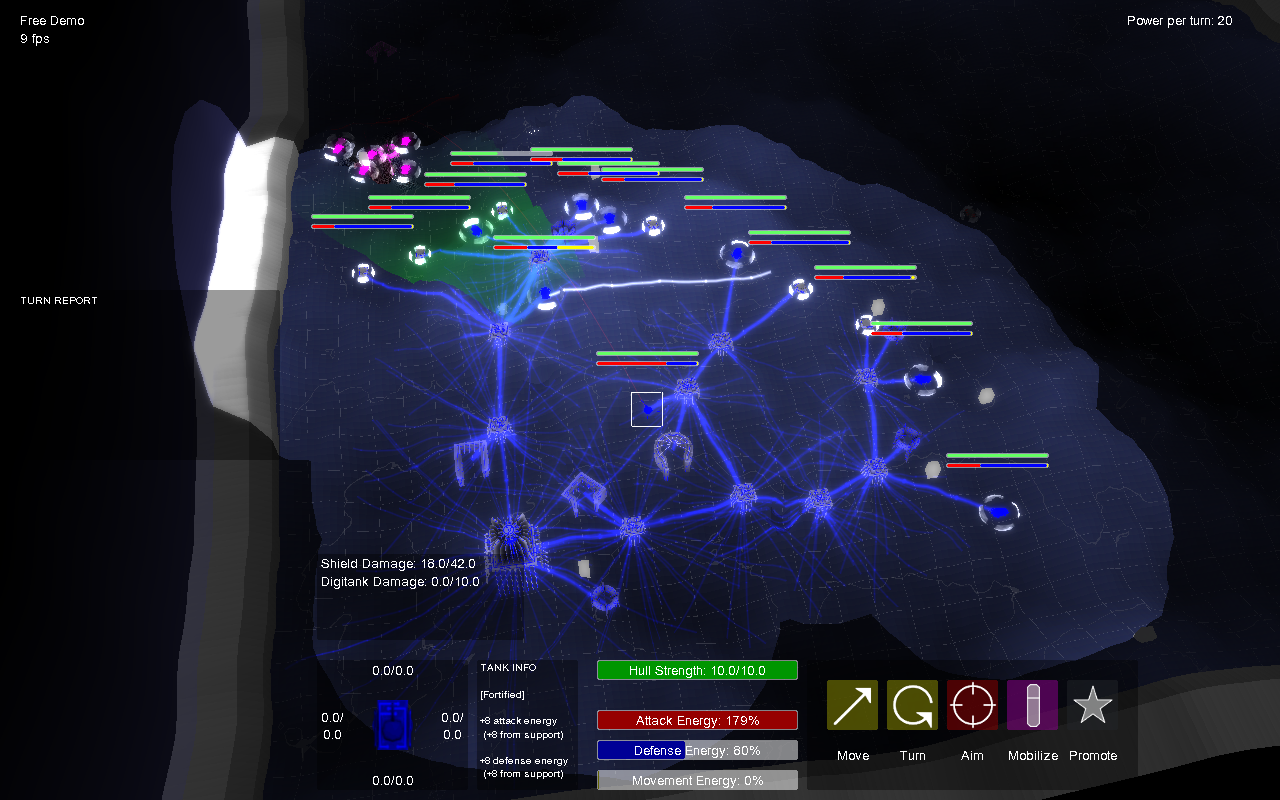 The good news is that the playtesting is starting to show a lot of progress, but the bad news is that I now have a list two pages long of things that need to be fixed before we can release the demo.

By the way I've added a Digg button to each post. If you like Digg and you enjoy the post, please take the time to visit the website Digg it. I'm going to be trying out the Digg button to see if it does anything for me, we'll see if it stays or not.

this game looks nicer and nicer with every news posting I see. Nice work, keep it up!

Oh, and I know the problem with Laptop + GPU. I put some CD-Cases under my laptop to solve that: Two at the front, one at the back in the middle. ;)

I can't stand how ModDB always archives my posts.

Definitely has a unique look now which will probably push it over the top.