This ain't yer typical western! Lots of lore, and what the game's name will be changing to.


Game's name will be changed to "Grimslingers", as that is what pretty much everyone voted for, and I like it too!Every really wondered what the game was about? The setting, story, blah blah, well here it is! (part one anyway). Don't expect the grammar to be fantastic...=P

You awake to a sudden jolt of pain, your nerves ablaze, vision blurred. Hovering over you is a metallic object, difficult to make it out exactly.

A scruffy looking man walks up and greets you with a rotten smile, offering his hand. He pulls you onto your feet and dusts you off.

“Greetin’s, the names Bo, which is short for Bo. Friends call me Bo though!”.

“Bet yer wonderin’ what’s going on, eh? Always enjoy explainin’ it to the new ones...”


The Iron Witch has been abducting individuals according to his fancy to be sired by him. Folks ‘round here have been a bit on edge since it started happenin’. Can’t say I blame em!

Guess he found something special about you. Most of the scars ya see all over yer body will go away in time.

The Iron Witch didn’t just sire you for fun, nah, he’s got a plan. Who the hell knows what it is though! Judging by the increase in sirings...he’s raisin’ an army.What good is an army inside this place, you ask? Ain’t got the slightest idea!


Heh heh, the Iron Witch. Oh boy, what a peculiarity, wouldn’t you say? Legend has it that he was created by some “Architect” eons ago. The Iron Witch is an automaton, a uh... machine like thinger, given a soul through some long forgotten thaumaturgical spell used to give life to Golems.

Not the only Golem though I hear, others been scattered throughout this fine universe. Ya know... I never been able to figure out if the Architect was from this dusty rock we’re callin’ earth or not.

Anyhow, “Icarus” is what the ol’ witch refers to ‘imself as, after the greek myth. Guessin’ he identifies with the story somehow. Also been known to refer to himself as Helios and Selene from time to time. Suppose in reference to his ability to use both the Sun and Moon for magic with precision ‘n skill.

Those within the coven refer to him as “Sire”, and those without usually don’t address him directly. I’m partial to “Creepy hunk’a metal”, though I don’t think he’d take too kindly to that.

The Iron Witch is a rather aloof presence within the Forgotten West and even among his own coven. Reserving his conversation, motives and desires for those within his close inner circle.

My guess is you and I will never be in that circle. No bother, always been more of a square m’self.

One last thing you need to understand: The Iron Witch is an all powerful being, heck, he’s God if that helps get it through yer head. Best to stay on his good side.

The Coven of the Iron Witch


Non existent until the Iron Witch decided to start siring y’all these past few months. It ain’t run by you-know-who, instead the first sired took it on themselves to organize a coven. They ain’t got many rules, more or less just pledging loyalty to the Iron Witch and not killing yer fellows.

Not like the Forgotten West is full of real upstanding individuals (no offense), so abiding by any law is a feat. Think there’s the uh…, what do they call it? Oath and Covenant? I nabbed one’a these awhile back, guess you’ll be gettin’ one yerself pretty soon. 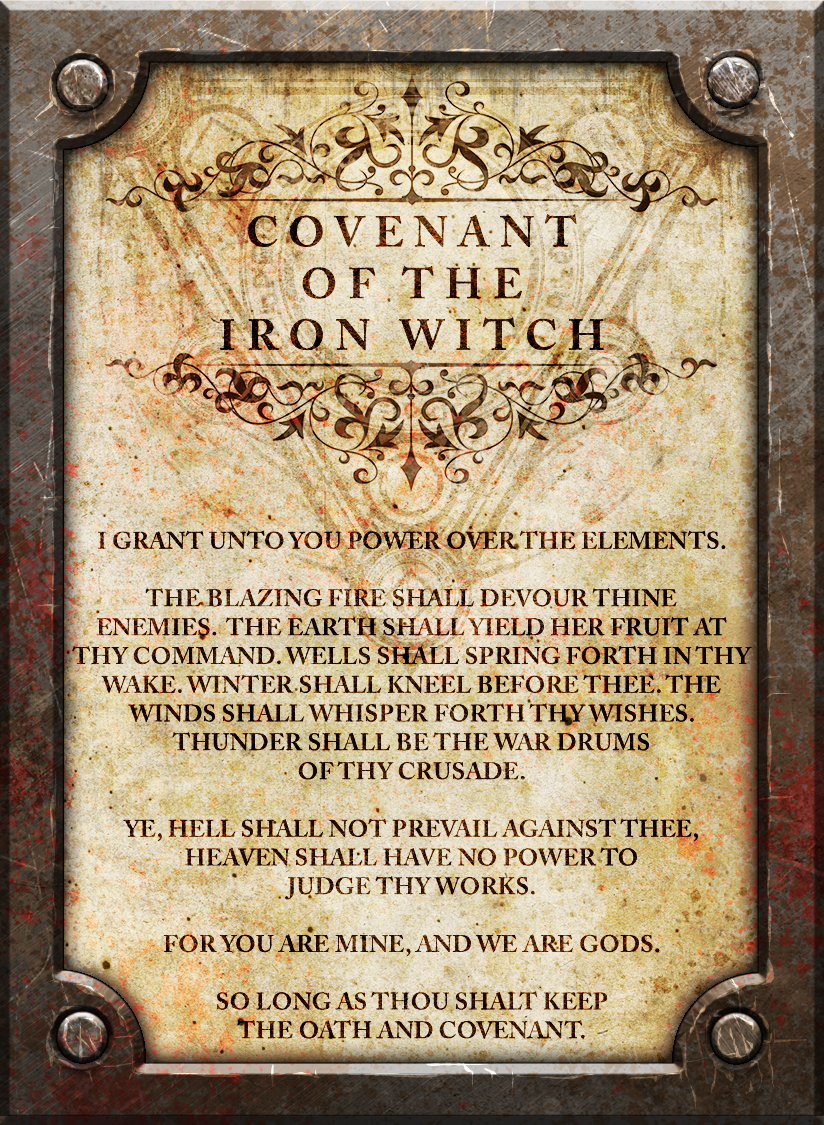 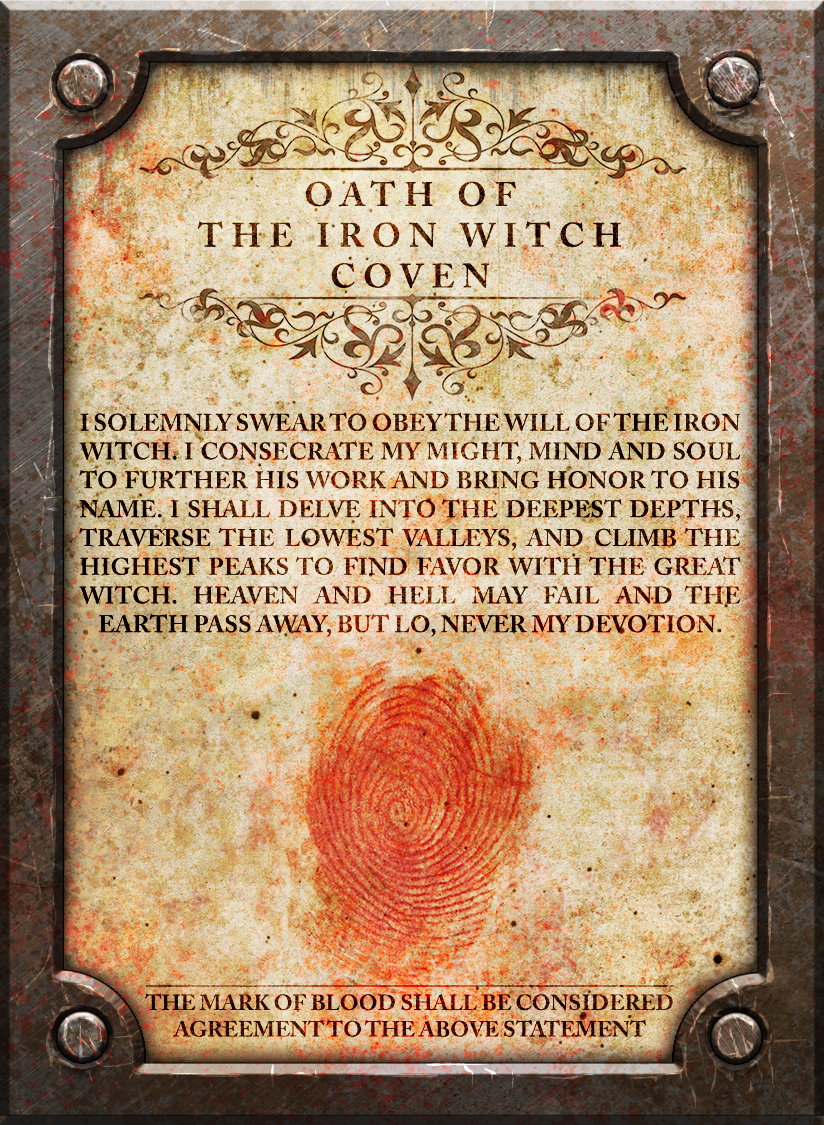 
Wish I had me one of those, without, you know...the Iron Witch forcing me into deadly duels at a moments notice.

Well if yer familiar with regular, run-’o-the-mill witch lore, a “grimoire” is a textbook of sorts for castin’ spells an’ performin’ rituals. The word “animus” is latin for livin’, among other things. So there you have it! A livin’ floatin’ magic textbook thinger, with a quirky personality to boot! (not sure why the Iron Witch gave em those…). 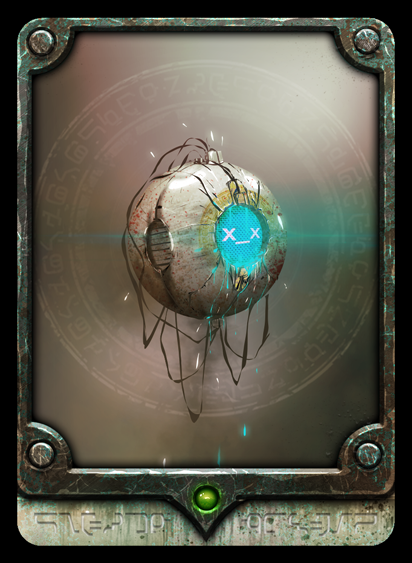 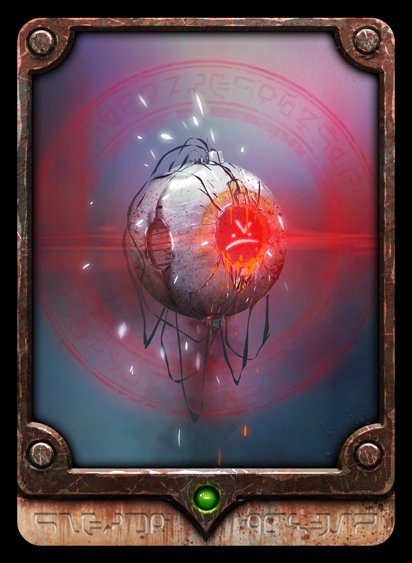 So, as you now know, the Grim (that’s what the locals call ‘em) is linked to one sired by the Iron Witch. Gives ‘em the abilities to cast spells and draw from various sources of power to cast them spells. Word is, as you’ll soon find out, they’re linked to you both physically and spiritually.

Get what that means? It meeaaanns that if you die, it dies. It dies, you die. You die, it die-oh I said that already, heh heh. Word of advice, treat it like yer own flesh and blood. Yer soul mates now! Betcha thought you’d end up with someone’ a bit more attractive, didn’t ya?

It’s fairly common magic practice to use an object of some kind, like a talisman, to channel spells through. The Grim is a bit like one of them talismans. Not only that, but they're meant to be your mentor and guide into the realm of the supernatural.

Don’t quote me on this but, I heard they got a direct link to the mind of the Iron Witch. Quite the special little friend you got followin’ you around.

By the way, locals call the likes of you “Grimslingers”, for obvious reasons.


It’s a fitting nickname for those that’ve been sired by the Iron Witch and linked to one of them Grims. When you ain’t bein’ called upon to duel, I guess yer free to roam about the Forgotten West. So long as you don’t cause enough trouble to deserve the awful scorn of your Maker.


Wouldn’t be the same in this God forsaken land without duels! But we’re not talkin’ about the impromptu gunfights that break out across the Forgotten West, now are we?

These duels he’s got you participatin’ in are trainin’ fer somethin’. Ain’t to the death though, so don’t worry (well, not usually anyway). At any given moment you’ll start feelin’ an unnerving desire to head to a specific location, yer own feet’ll probably take off under ya! It’s what Grimslingers refer to as “being called”. You’ll end up at a gatherin’ with the Iron Witch and some other Grimslingers (likely some regular ol’ bystanders too).

Then, he’ll pit you up against someone else and it’s all magic and blood from thereon out. He’ll be judgin’ yer performance, so be clever.

Most ‘slingers sit on the sidelines a distance away from their Grims, seein’ as yer linked ‘n all. No point in doubling up the pain if you both get blasted, now is there?


Course you seen it, that big upside-down pyramid like thing in the sky? Far as I can tell, it’s floatin’ right in the heart of this here prison land. I had the guts one time to ask the Iron Witch what it was...a’right, a’right, maybe not so much guts but the booze in them guts, either way, he answered little ol’ me.

Cryptic as it was, he said it were “a craft to not only traverse creation, but add to it”, whatever that means. Few have been inside, they say it’s somethin’ like...machines and lights and such, a laboratory of sorts...if that’s a thing.

Makes for a good landmark to get around though, don’t it? 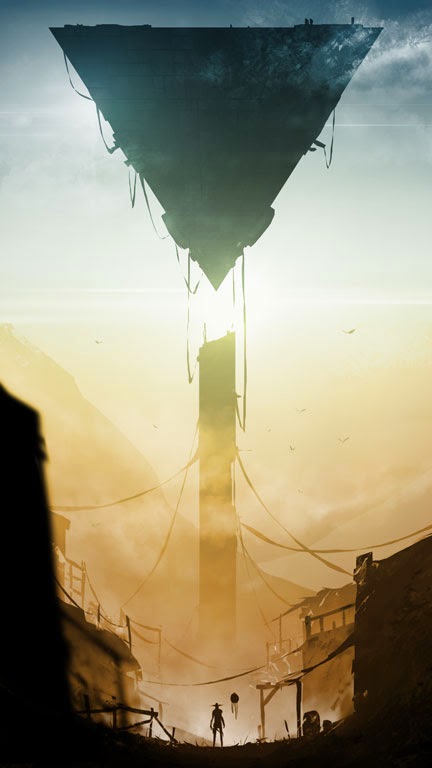 
Oft been referred to as magic, miracles, sorcery, witchcraft and the like. It be the ancient art o’creation and manipulation, the power to communicate with them laws of the universe. You know..the ones that bind all things together and set ‘em in motion all complicated like.

Sad lot for Thaumaturgy though, almost since the start it’s been segmented, apostatized, and altered by cultural and personal preferences. Hundreds and thousands and millions and...maybe not millions, but hell, there be all kinds of denominations of magics spread across the face a’the earth with roots in the one true source.

As far as is known (as in...as far as the walls of the Forgotten West go), it was taught to mankind by the “Light” to establish order and exaltify mankind to higher realms of peace and unity with the universes and all that hogwash. The “Darkness” came along and put it in the hearts of men to use it for their own gain. Down right evil lot they are...but no more than us I guess, ha ha!

Magic can only be practiced by one who has a soul (that’s you an’ me) and been ordained by either the Darkness or the Light through the use of an “Ochre” stone (certainly ain’t me). Once ordained, I hear it becomes part of that there bloodline, rarely surfacin’ though.

Love that pic of the temple: nice work! :)

Thanks! :) Hoping to get a whole lot more concept out in the coming months.

This is looking great; love the lore!

Thanks :) Check beck later for the next installment!