Today we show off a render of our Finnish captured T-34-85, the most modern tank to be used by the Finns in the Continuation War.

Today we are showing off a render of the most advanced tank to see combat with the Finnish Army in the Continuation War. 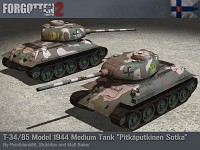 The new T-34-85 had begun to place the older T-34s at the front in 1944, and were one of the main Soviet tanks in the large summer offensive against Finland that year. As with many other Soviet vehicles, the Finns were able to capture a number of these vehicles and press them into service. In total, 9 T-34-85 were captured, of which 5 were in drivable condition and a further 2 could be repaired.

These new tanks were a powerful addition to the Finnish Army, but supplies of ammunition were limited and the war was over before they could make much impact. To the Finns, this new Sotka was known rather simply as Pitkäputkinen Sotka, or "Long Barrel Sotka". The captured tanks received similar modifications and camouflage paint as the other Sotkas, and ours was modified from Pointblank86's original by Matt Baker and Stubbfan.