About month of updates and a nasty incident leading to a news block.

A very long time passed since the last news. One reason had been me moving to a new place which took longer than expect. Then there had been lots of work too correlated to show by its own. And finaly but not least there had been some nasty incidents at ModDB where somebody with site moderator power (as it seems) vandalizing the profile of my project which I restored. Due to this incidents though I put a news ban on ModDB which had been in effect since somewhere the beginning of this year. In the mean time though a couple of people asked me to lift the ban. When I found a way to protect my work by reworking the Wiki to host the articles I decided to lift the ban as on my wiki my work is safe. I don't want to warm up this story more than I just did. Important now is only that ban is lifted. For me this incident is now a matter of the past and shall stay there. Let's move on to what is really important.

The Drag[en]gine Wiki has been completely overhauled. To help prepare for a future release of the game engine this wiki is turned into the SDK and first source of information. Hence it is made for the developers wishing to work with the game engine. Especially in light of the incidents that happened the wiki has been modified to hold also all the articles from now on. I'll now only make short bullet lists of what has happened linking to the wiki pages. No articles will be posted anymore on ModDB (on my wiki they can't be vandelized). The articles contain in depth details. It's really worth reading them if you want to know all over the Drag[en]gine.

The Big What Has Happened In All The Month List!

Here the list of what happened during all these month. Click on the links for detailed articles about the topic:

And here a video showing the Old Industrial Zone map. Cut together various video clips to give a little overview of the map, the game controls, the movie camera and other stuff. Please excuse the frame rate but GLC gets into problems once the GPU memory is crammed full. I'm working on improving that. Also the video codec killed the night scenes so I cut out most of it as it is too dark to see. See the Map Screenshots for more images including night scene how it really looks like.


Two example screenshots I uploaded also here. The rest you find in the Map Screenshots Gallery. 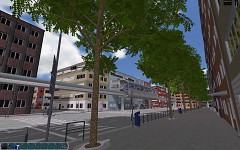 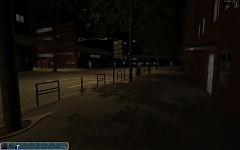 It's time now for an overdue all important addition to the shader system to allow for even more power and versatility that I need to get that performance punch to crank up frame rates. My Radeon 4870 HD is not the youngest and most powerful graphic card anymore but I have the will to get the most punch out of it with my engine. Besides this I want to get the first mission into a playable state with first investigation work going on. A lot of the required engine work is done already. And that is the most time consuming part so far. Furthermore more articles will be moved one by one to the safety of the Wiki.