News on the replacement for Beta 0.999 and some LWR news.

After a lot of thought a new name has been chosen for Beta 0.999's replacement.
Lone Wolf:Age of the RingsThis name echoes the Age of Numenor name and ties it to the War of the Ring.
Seen below is the new logo and promotion image. 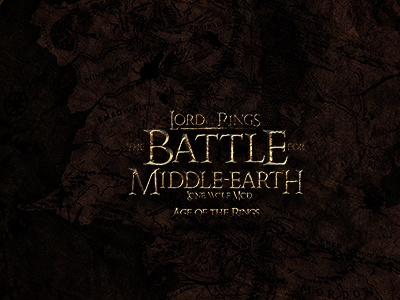 The first updated tech trees have been revealed for Age of the Rings Eriador and Rhovanion.
Coding has also officially begun on Age of the Rings with coding for Eriador already under way.
As of yet I don't have a set release date.
Lone Wolf Return of Shadow news-The Dunland tech tree for LWR has also been updated.
Some changes have been made to the plans for the Noldor Lightbearer and Mirkwood Enchanters.
Both of these units share the same basic premise of specialising.
When specialised the units each gain 2 abilities and a passive leadership.
These specialties can be purchased and applied individually to the units so you can vary them.
Lightbearer-
Techs:
Book of Radiant Light - Teaches Radiant Light
Book of Protective Light - Teaches Protective Light
Book of Healing Light - Teaches Healing Light
Book of Searing Light - Teaches Searing Light
Radiant Light skills:
Radiant Light - A bright light that stuns and damages an enemy.
Radiant Armour - Gives the Lightbearer a 20% chance of a counter attack that stuns enemies when damaged.
Protective Light skills:
Protective Light - Protective aura, increases armour for nearby allies.
Protective Armour - Improves armour -reducing damage from heroes, magic, flame and structural sources.
Healing Light skills:
Healing Light - Heals targeted allies.
Calming Light - Provides a small autoheal for nearby units.
Searing Light skills:
Searing Light - AOE attack that deals strong damage against dark enemies.
Inner Light - TBA
They also get a passive leadership from the start.
Aura of Light - Leadership - Fear immunity, vision and range increase and health recovery increase.
Enchanter-
The Enchanters are centred around basic element control obtainable by learning a basic elemental lore.
Each element has a focus Earth is crowd control, Water is healing, Fire is damage over time and Wind is support buffs.
The Enchanter's new roles also make the Herbalist redundant so it's been removed.
Techs:
Earth Lore - Unlocks Earth spells for the Enchanter
Water Lore - Unlocks Water spells for the Enchanter
Fire Lore - Unlocks Fire spells for the Enchanter
Wind Lore - Unlocks Wind spells for the Enchanter
Skills:Earth-
Snaring roots - Summons roots that roots enemies to the ground
Tremor - Stun and damages enemies
Water-Chalice - Spawns a chalice of healing water that heals nearby units.
Healing Gourd - Provides a small heal to nearby units
Fire-
Fire Phial - Smashes a small phial of fire oil on the ground does a AOE-DOT
Cinders - Throws a burning pine cone at the target causing fire damage over time
Wind-
Strong Gust - knocks back enemies
Enchanted Wind - increases the range, vision and speed of nearby archers.
They also have a passive leadership.
Enchanted influence - Knockback immunity and experience boost for nearby units.
Comments

so far this is brilliant but i do have a question i would like to ask, are arnor and the others factions in the game or are they being developed and if they are do you have any idea when the would be added? thanks for the mod though it is really good so far, you deserve a lot of credit :)