Where we talk about feedback, importance of the player, future and improvement.

After the excitation of the event, it was time to analyse everything, from the cosmetic details (inner part of ladders) to core mechanics (procedural generation of level, I'll talk about it in a future article).

Everything is important. Maybe not for you as a developper, but it is for the player who noticed it.

During a public playtest, you see the player's reaction, especially when you look from a distant point.

These are the results for my session

The game was well received, except for one player.

Nevetherless, with every player, there was the always same bad point : the throw of the candle. At this stage it was all but fun to use, no trajectory displayed, no indicator. It was the first correction I made, it's a core component of the game, it needs to be easy, and fun to use.

A player really liked that the game was focused on the candle. He gave me some ideas and found some on mines.

Among his ideas there was :

The waterfall has been made thanks to this player's idea. When Ruggnar is under the waterfall, the flame disappear.

Many people asked me what will be the platforms on which Ruggnar will be available. I target Windows, Linux, if I can have a MacOS on OSX, maybe on Android.

Just to conclude about this event, for me, it's pure gold.

I work alone on Ruggnar, far from big cities and in these conditions, it may be hard to confront ideas, to talk about concepts. So meeting people, talk about the game it's a real pleasure.

It was time to add some powerups.

For the moment, there is two power ups : 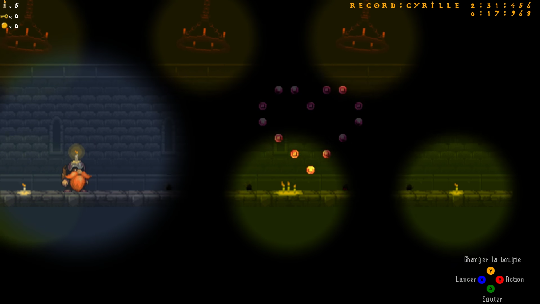 The run and jump was ok. But climbing was a little messy. I tweaked everything to be more fun.

For example, when the player leave a platform, he still has a short time to jump.

I asked my pixel artist 2 new animations : pushing/pulling and ducking, once again, he did a great job

At this stage, the game was static, I really need to put some life in it.

A lot of mechanics were missing. Among them pushing and pulling boxes and some moving platform.

One very important thing is the possibility to pick up a previously thrown candle. As the candles are the player's life, throwing a candle was like losing a life. Now i's possible to pick it up (if accessible). It became less risky to throw a candle.

Ruggnar, from time to time, could say a word to the player. With the help of a dialog box, he is able to deliver some message like this one :

For sure, I have still a lot of work to do. Next step, a new IndieGames Club to show the evolution and collect some feedback