So what is Red Alert 2 Siege of New York? Probably something too ambitious for my own good but I'm going to give it a bloody good try anyway. The aim is to try and make a similar map to the first Allied mission of Red Alert 2 in the Civ2 engine and have both sides battling across the map trying to breakthrough garrisoned sky scrapers with tanks, ships and bombers etc (using imported RA2 unit graphics similar to what I did with the C&C scenario).

Visually there's no way in hell I can make it look anywhere near as good as the original but the aim to is try and get is as close as I can using lots of different Civ2 editing tricks.
Eg here's a shot of the original game in all it's beauty: 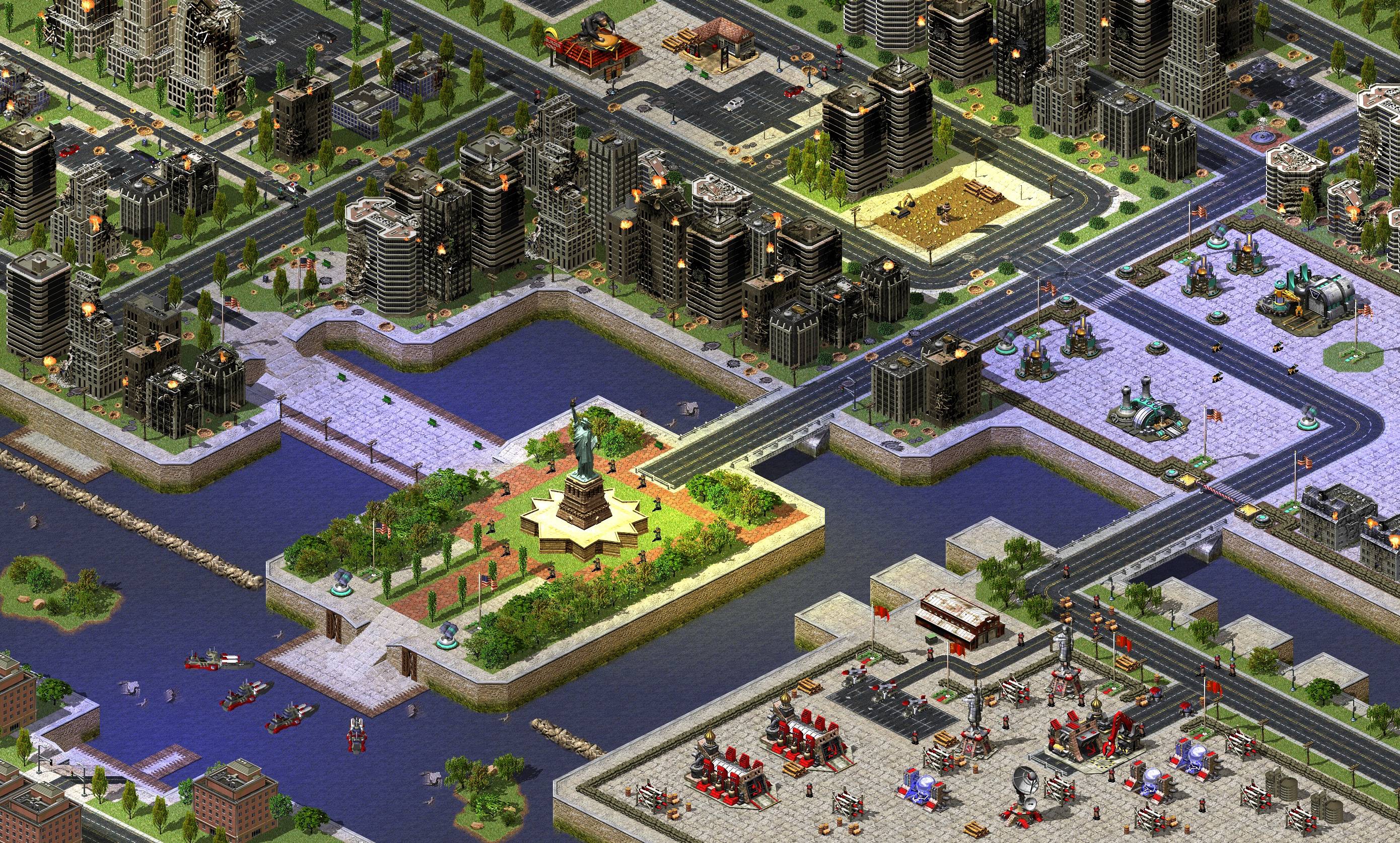 One cool Civ2 trick is that using 3x3 super cell areas made out of River, Forrest, Hills & Mountain formations I can create 4 big sky scrapers, and I'll also have leftover cells for 2 square diagonal buildings and of course I'll have lots of cells free for smaller 1 cell buildings.
Eg here's a shot of my first test super building, the surrounding cells inside the 3x3 will be MUCH more packed with buildings in the final version. You can also see I've made some test 1 cell burning buildings. I've also mapped out the shoreline border lines to later insert the cool seaside cement brick wall docks of the original map. 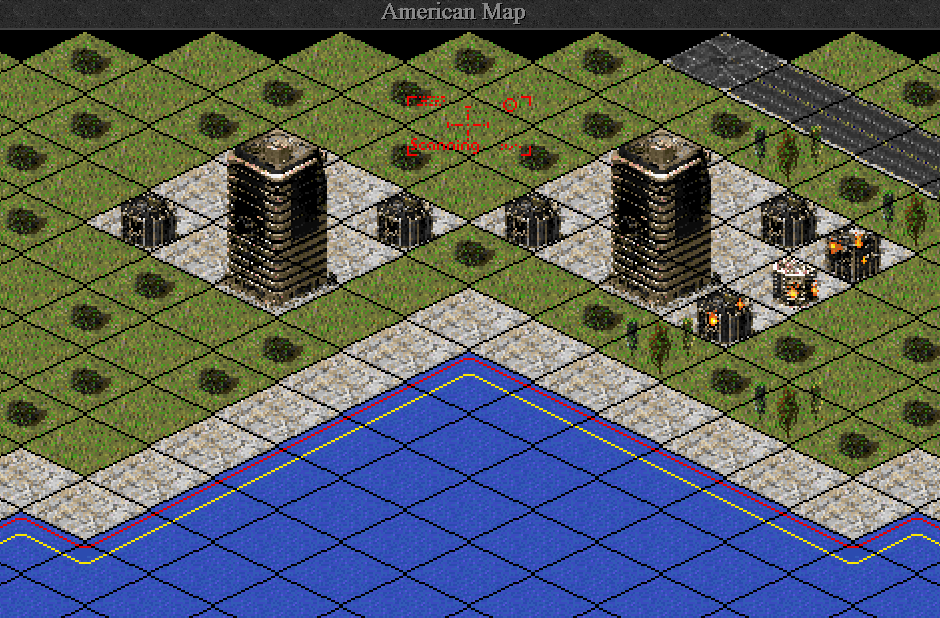 Now the real fun trick with these buildings is to downsize and convert not just the damaged version but also the healthy garrisoned version too! This will then allow me to break up certain areas of the super buildings into Civ2 unit images. These units will act as the garrisons and once they are killed it will reveal the damaged burning building underneath. This creates a similar fun effect to the original Red alert game where clearing out a building garrisons would leave a damaged burning building behind. Later Ill show how I use a similar trick (units over damaged terrain) to simulate the soviets destroying the statue of liberty!

Example of me converting healthy/damaged/garrisoned versions of a small building:

And a garrisoned/damaged super building for another 3x3 I'm working on right now: 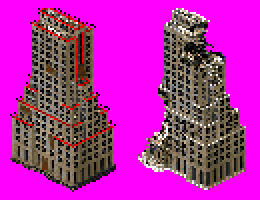 Another tough thing I've managed to successfully implement is something that many Civ2 modders have experienced the 'joys' of and that's Land Bridges! I thought to myself.. how the hell do I create a bridge just like Red Alert 2's bridges that land units can cross but does NOT have the Civ2 shoreline textures. Then I remembered there is 1 texture in the game that overrides shoreline textures, river mouths! Metro used the 4 different river mouth textures to implement extra decoration in our HoMM2 scenario and I realised I could do the same and put bridge side textures on them. Of course to get river mouths I need a river going across the bridge which created another problem, as rivers override all land terrain types. However then I remembered roads and railroads override rivers so I just needed to replace Civ2's roads with red alert 2's big fat highways and the sneaky subterfuge was complete haha.

On the left is the finished land bridge that tanks can cross. On the right the deception is revealed showing default Civ2 graphics:

Metro also gave me a great idea of using terrain improvement graphics for base buildings around the cities. Irrigation could be Soviet Tesla reactors, Farmland could be Allied Power Plants, mines could be Ore Processing plants. Similar to my C&C Tiberian scenario above I plan to use Construction site graphics for city graphics so it will look very cool and Red alert 2 looking to have little power plants and ore plants around the construction sites just like in a real C&C base haha.

Also this gives me an extra idea to try later.. if you look at the original Red alert 2 image at the start of this post you can see a cool blue hew light affect over the entire allied base, on other maps there's a red light over Soviet bases. That's not really something I can replicate in Civ2 (without sacrificing more terrain cells that I'd rather use on city buildings) however if I put these power plants on concrete slabs (similar to my existing white concrete slab graphics) and give these concrete slabs beneath the buildings either a slightly blue or red tinge/glow this would then create a bit of a red or blue glow illusion around the city bases! Simulating coloured lighting in a Civ2 level would be another big wow factor feature I can't resist trying haha. I'll have to do some experiments in a future dev diary!

In the meantime I've also made an early Liberty island with a multi cell destructible Statue of Liberty. In the finished scenario I'll stick in an event that triggers if the soviets destroy it where it plays a WAV file of Premier Romanov giving his morale crushing "See your liberty, how she lies broken before you..." speech haha.

Amazing work! Im impressed at how much you can squeeze into this ancient engine