In Dead in Vinland, your characters will have to survive on an unknown island. But, how are they supposed to survive if they don't know it? That's right, you're going to have to explore the Island and reveal all its mysteries!

Hello survivors! Soo today, we’re entering a new phase in our blogposts. You know pretty much everything about the main characters (don’t worry, we stil have a few more to reveal), and you know all about combats. (And if you don’t, you can real all about it on the devblog!). However, there’s something you don’t know yet: exploration! Take your map and your backpack and let’s do some exploration!

First of all, if you’re familiar with Dead in Bermuda, you might remember how to explore the island: you assign a character to the exploration part of the camp, and when the area is fully explored, you “teleport” to it. There, you get one special objet with which you can interact. If you take any action on it, a stealth skillcheck to see if you are noticed, and done. 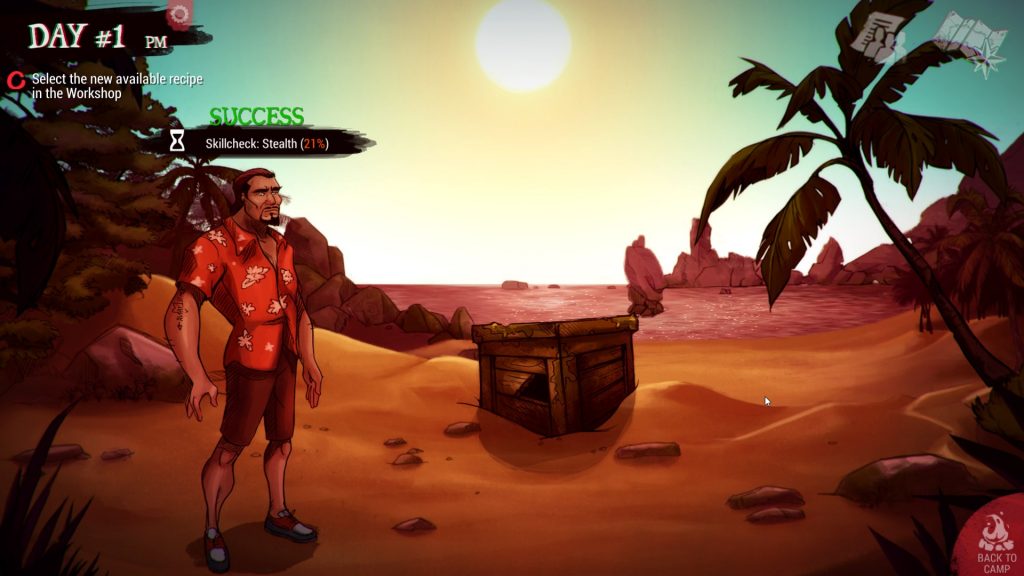 In the team, we call those “rooms”, and objects you can interact with “entities”

The core gameplay of exploration in Dead in Vinland is mostly the same. However, there are some changes that will make the player’s experience smoothier. As you may remember, exploration was important in DiB. In Dead in Vinland, you’ll also need to be able to go out of your camp and go on (not so) uncharted territory. And let’s keep in mind that you’ll only be able to recruit new characters in your camp by exploring the island!

When you want to explore, you need to assign your character at the “exploration” spot in the camp. However, you have to keep in mind that you’ll need some water to explore. And as we’ve told you in the water blogpost, water is absolutely vital if you want to survive more than a week.

Another change is that each time you go on exploring, you have a chance to be discovered. But this time, it will trigger a real combat against a stack of foes. You can choose to focus on stealth or on exploration to cover more ground while exploring. 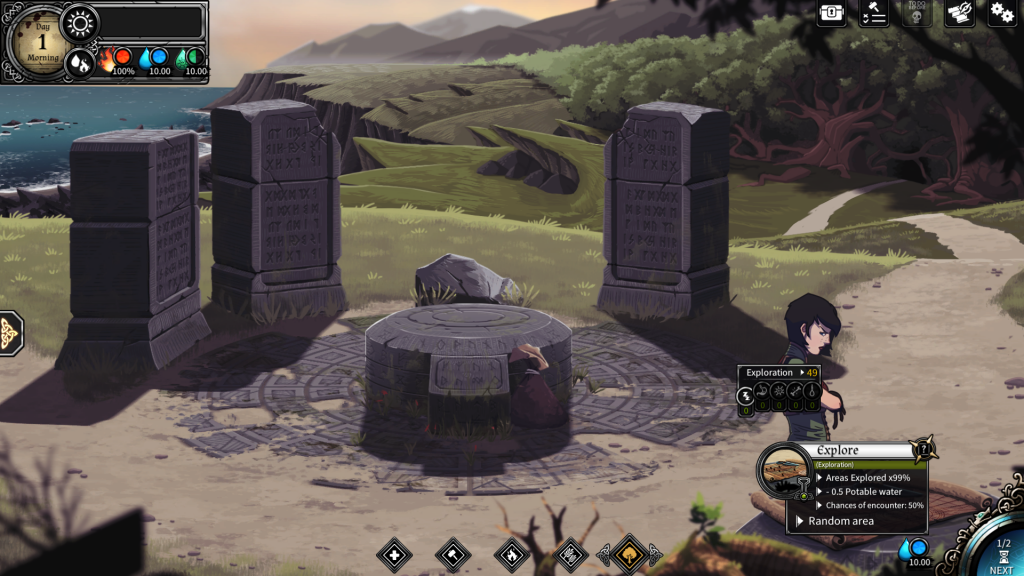 When your character has discovered a new area, you’ll be able to interact with the entity that’s there. Like in DiB, you still have the choice between some contextual actions in an action wheel.

You can have 3 types of interactions with the entity: 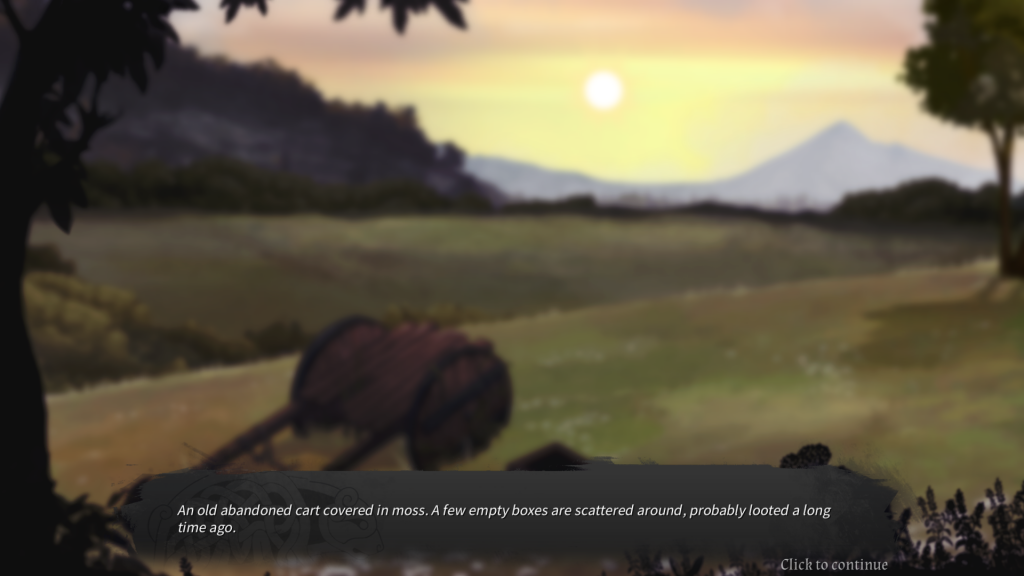 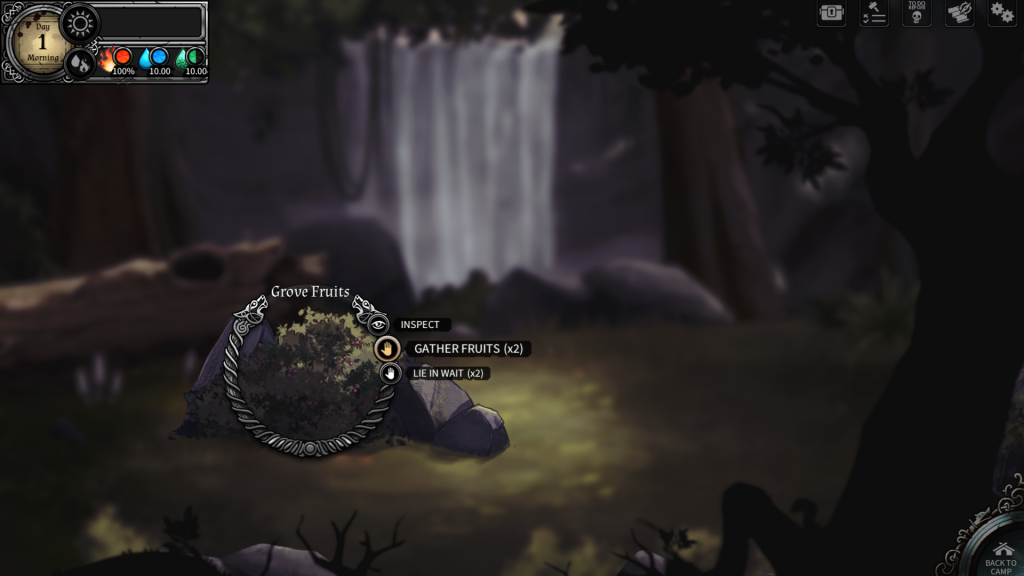 Here, if you gather fruits twice, you’ll still be able to “Lie in wait” afterwards. 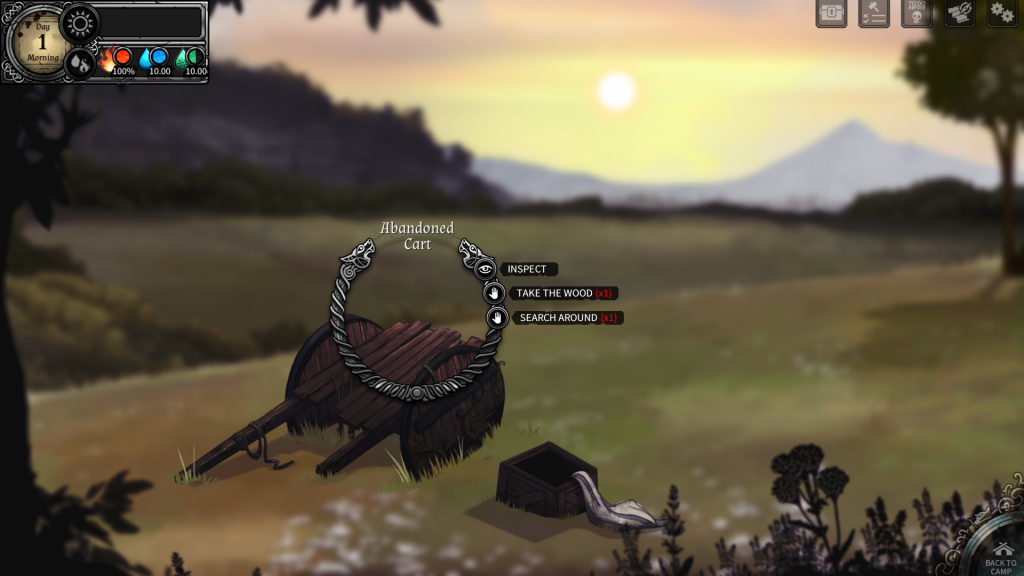 You can either “Take the wood” or “Search around”

We expanded this system with “conditions”. Some actions need pre-requistes for the player to be able to choose them. For example, having a particular item in inventory, or having done other things before doing this action. Some actions can even be invisible if these conditions are not met. 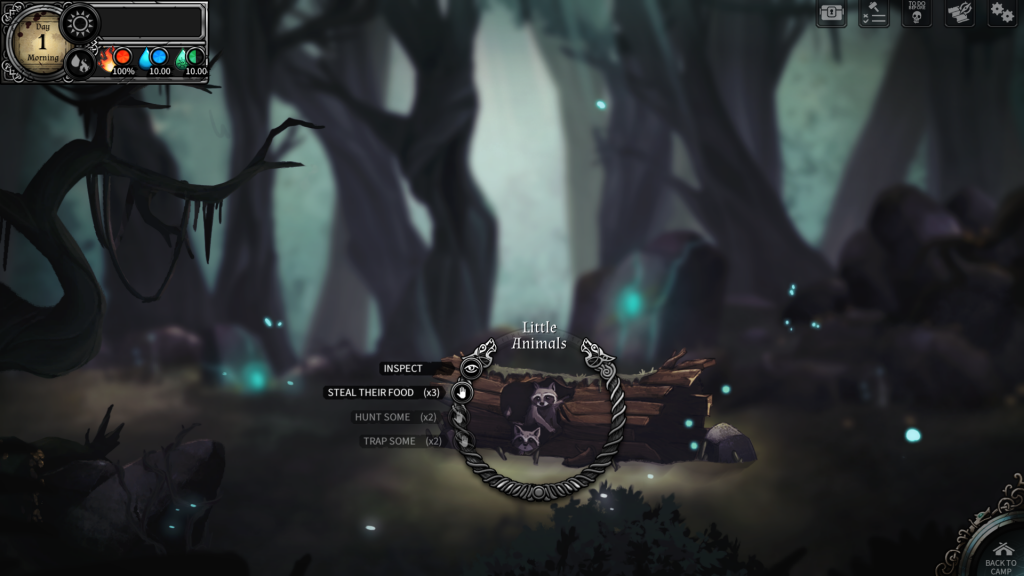 If you don’t have arrows, you can’t hurt those cute little raccoons. 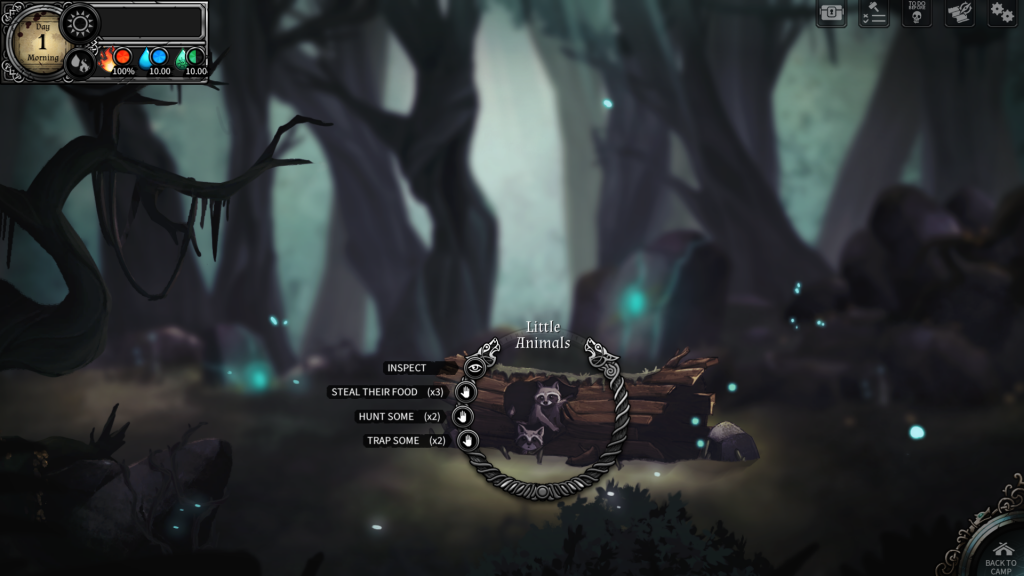 If you have arrows, you can hunt them. But look at how harmless they are.

Then, after you choose the action, that’s where the biggest change occured. In DiB, we only had a small pop up with some text in it to describe what is happening, and then some rewards. Now, we integrated everything with our cool dialogue system! So, every action in the game launches a specific dialog. We thought it was a great idea, because we are much more flexible with that and can make little “choose your own adventure” stories with every object on the island. BUT, it means a LOOOOOOOOOT more work to write all of them. We know, we’re crazy.

You can do the maths: we have roughly a hundred entities, with each 2 to 6 actions possible. Plus entities with special actions like “TALK” that converts into a dozen different dialogs on average… Yes… We know…

Fortunately we realized at some point that Matthieu alone (the author of the game) wouldn’t be able to write everything by himself… So we asked for help in the studio and outside, and thanks to Morgane, Christophe and Valentine we’ll make it in time! We guess. No, it’s good. I think. 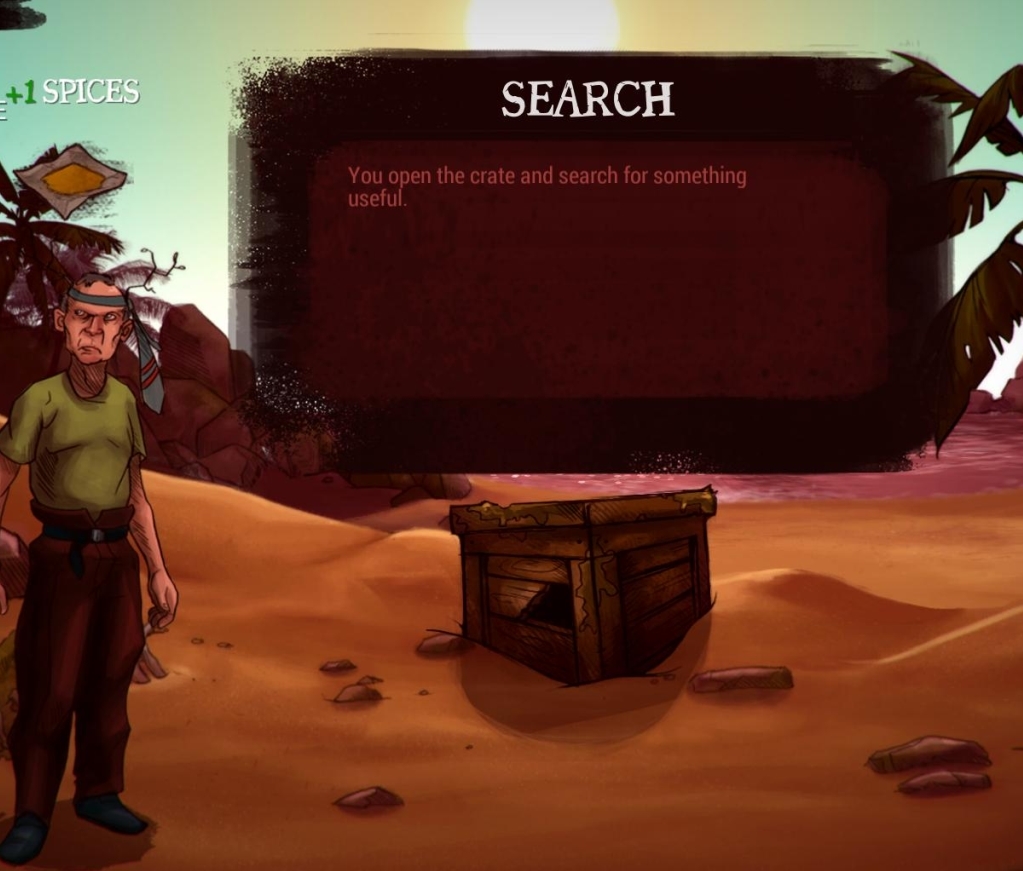 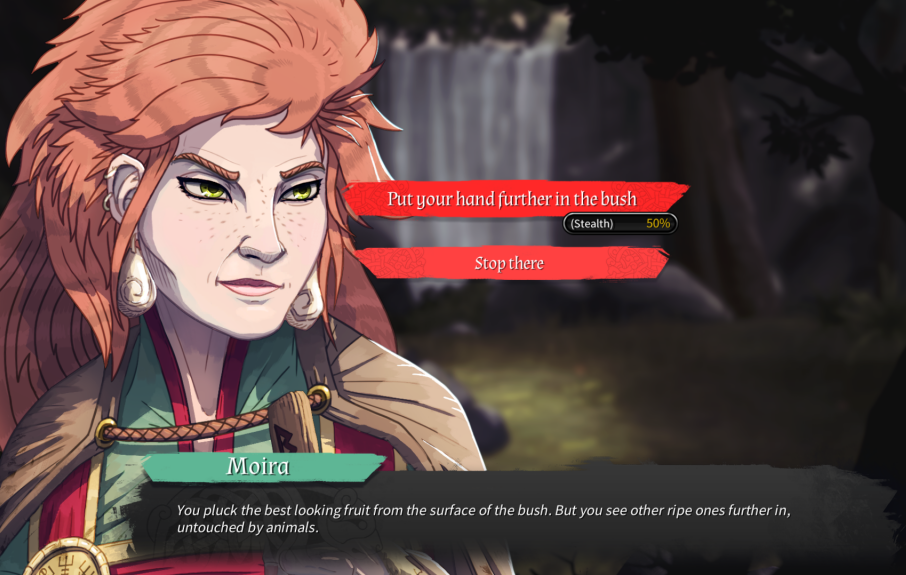 We also still have skillchecks. It’ll often happen that skillchecks are used when you want to get “more”. If you’re greedy, you’ll be more likely to lose everything.

When designing the game, we wanted the player to take some risks. If he plays it too safe, he may not have enough supplies to make his characters survive. On the other hand, if he’s too greedy, he’ll likely end up killing his characters because they’ll take too much risks. That point is already present at night with water, and it’s also present when exploring the island. On the picture, Moira can only take one fruit and stop there. That’s the safe way, but she can also try and get some more that’s the risky way. Now, let’s take a look at what happens if she’s too greedy.

Here, you see that she’s failed to take some more and got hurt. And above all, she lost all chances to get any fruit at all in the process.

Finally, let’s look at the map of the game. If you follow us on Twitter or Facebook, you’ve already seen the map of Dead in Vinland, 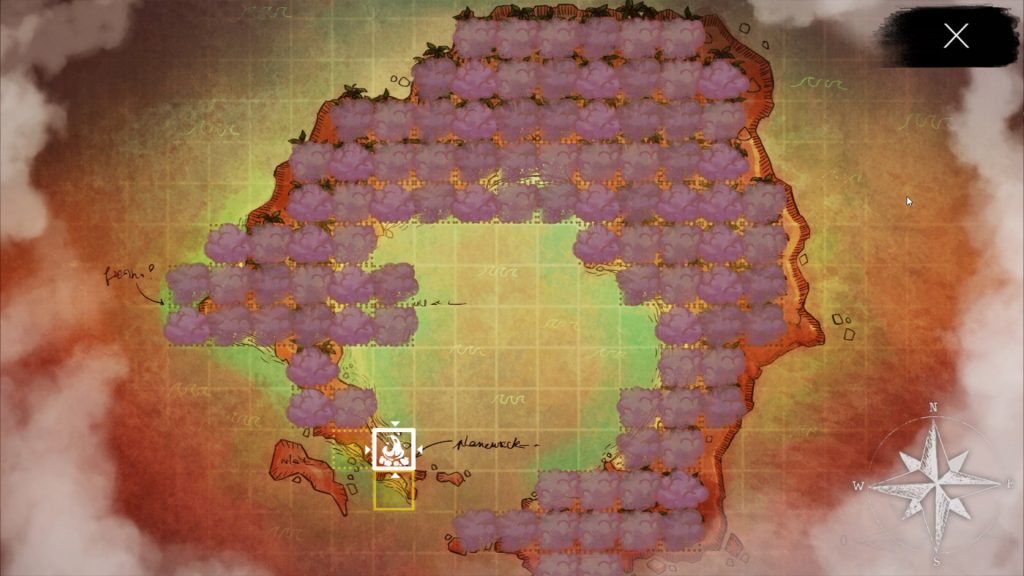 The worldmap of DiB had 100 rooms to explore… 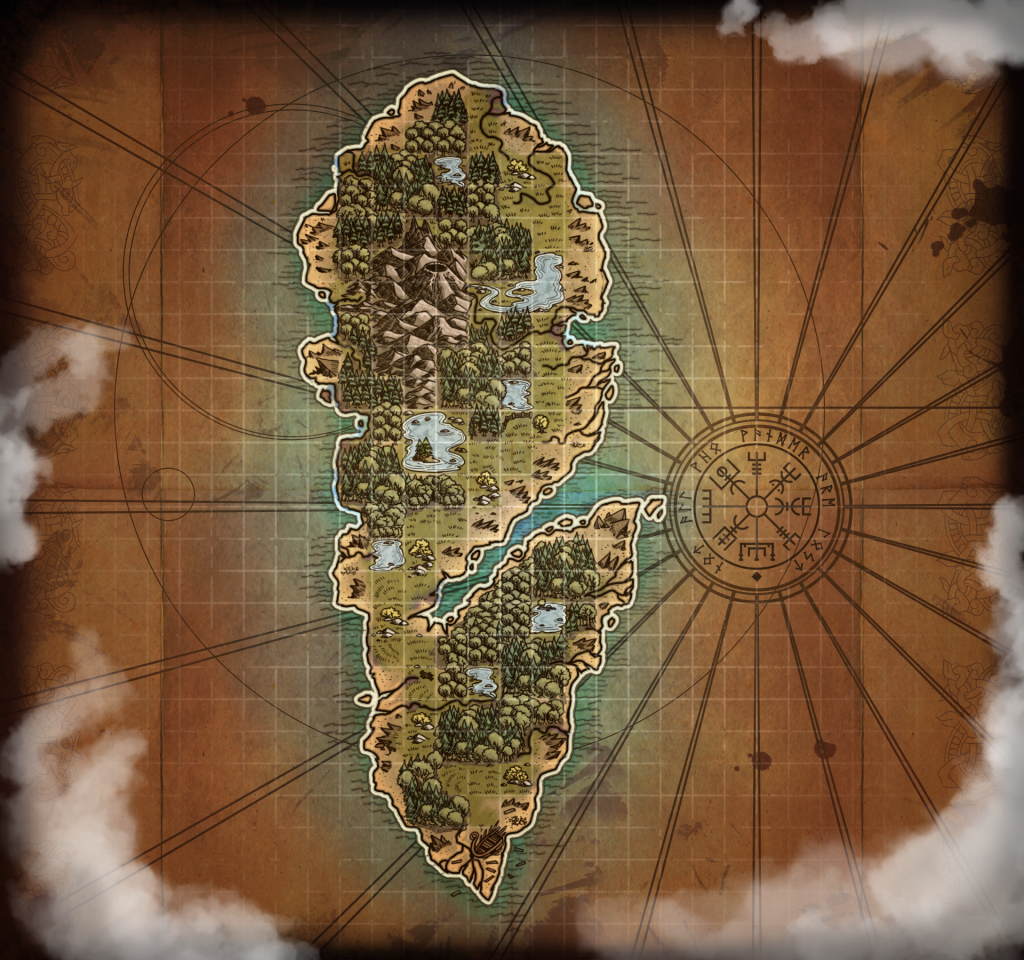 … And the worldmap of DiV will have more than 150!

That’s all for the exploration! Many surprises await when you’ll explore this cursed island, both good… And bad…