I start trying to prove why Lethal Stigma is unique and worth watching, but it turns into so much more.

Over the past few months during development, it's come to my attention numerous times that a majority of people out there do not understand what sets Lethal Stigma apart from the pack and why it is so special and unique. Until now I've simply brushed off such comments and questions, however not but a couple of hours ago I decided to address this growing problem head-on in hopes of putting it to bed once and for all. Simply put, this is my fault, not the mod community's, so let's end the madness right here, right now.

Lethal Stigma is not Team Fortress 2. It is not Modular Combat. It is not Half-Life 2: Deathmatch, and it is not Half-Life 2: Capture the Flag. Why? Because it's a little bit of all of the above - and then some. Still don't understand? Well, I'm usually not one for lists, but for the sake of proving my point, here we go (I'll try to briefly hit on most of the main points):

Multiple gamemodes
Lethal Stigma is no longer the one-gamemode modification it once was. There are currently four different ways to play: team elimination, free for all, capture the flag and outbreak. Each has a twist on the familiar. For instance, in CTF, there's only one flag and it is every players' job to find it and hold onto it for a certain amount of time rather than simply take the opposing team's flag and return it to his or her base. With more gamemodes also comes brand-new maps and old favorites, too. 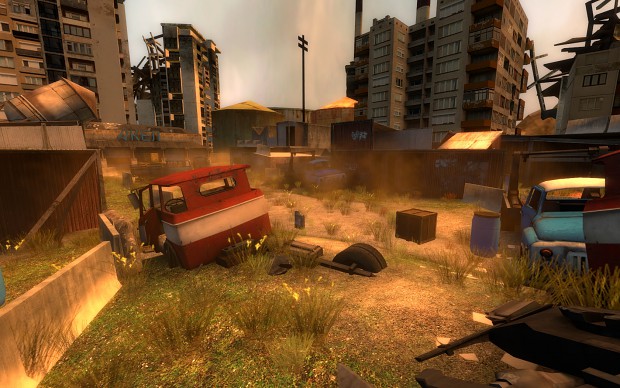 Class-based gameplay
Players choose between five different classes, some of which you've heard before: tank, assault, sniper, engineer and medic. Each has their own set of advantages and disadvantages (health, speed, etc) and start with a series of default weaponry that can be upgraded later. 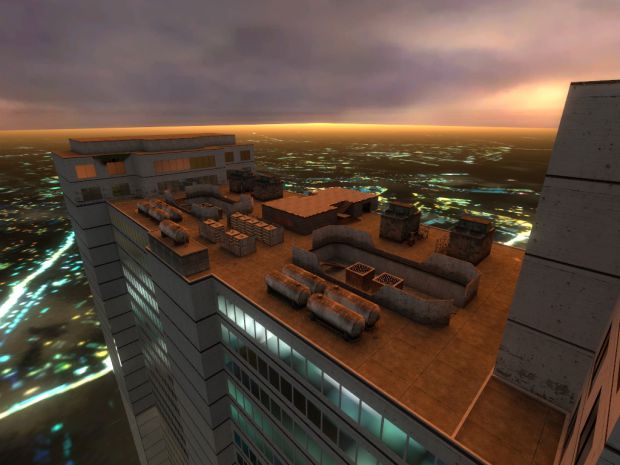 Experience and leveling system
Players get experience for the obvious (killing enemies, helping teammates, completing objectives) and the not-so-obvious (headshots, kill streaks, melee or explosive kills, etc). This experience contributes to your overall level. Get enough experience and you'll level up, granting you a couple of upgrade credits, bringing me to my next bullet... 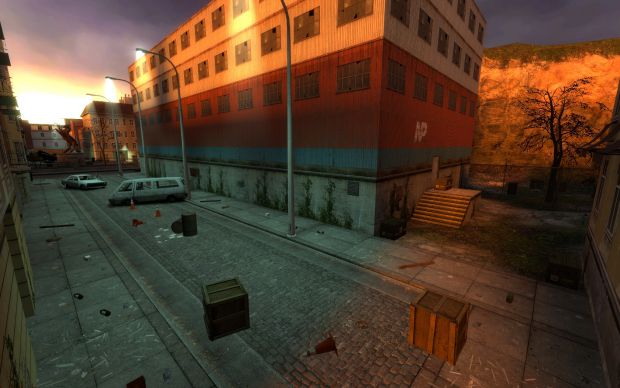 Upgrade system
When a player gains levels, they are granted upgrade credits that they can use to trick out their weapons, and individual class, or their character in general. These credits are dynamic and can be exchanged and recycled for other upgrades anytime. Currently, available upgrades include things like cloaking, health and AUX power regeneration, increased bullet damage, gravity nullification, and much more. Upgrade credits can also be used to purchase entirely new weapons - like a winchester, dual pistols, and even hopwire grenades - or old favorites not used by any particular class, such as the .357 magnum and S.L.A.M.


For some of you (if not many of you), this entire exercise was pointless. Why? Because us gamers are often very visual. A mod could have everything in the world that one wanted, however one might never feel the urge to play it if it looked like something else one has already played. For those who still aren't following me and are about to stop reading, allow me to explain exactly what I mean one last time with an example:

Joe makes a mod. He thinks it is fun to play. People who play it also think it is fun to play, but they notice that it looks bland. Billy is looking for a mod that is fun to play. He likes...uh...the robots he saw in another mod. He sees Joe's mod. He reads about it and looks at it for some time, but decides not to download it or look into it further because it doesn't have any robots in it.

I strongly believe Lethal Stigma is suffering from something very similar. Granted, this is perfectly understandable and I fully recognize this dilemma, and it's my fault for not resolving it sooner. After all, one developer cannot change the mind of millions of gamers. In fact, it is actually my job to conform to what you guys want to play. Regardless, it is my hope to at least soften the effect this problem has on my projects from here on out, because I do not plan to add any...uh, robots...anytime soon.

In conclusion, I know I am fighting an uphill battle here, but I don't seek to change the way people think, I just want to help open peoples' minds a bit. It's true; I don't have any flashy screenshots, no amazing renders of crazy spaceships or in-game video of an awesome futuristic tank or something...but since when are these requirements? If people are turned off by the fact that Lethal Stigma is HL2-based or looks like something else out there, so be it, but I truly believe that you will be missing out on something fun and exciting if you don't at least try it when it is available for everyone to download come July.

Whoops, did I just leak a release date? :p

I'm sorry if this turned into a rant. I didn't intend for that to happen. Anyhow, please continue to follow us via our website @ www.lethalstigma.com and our public Steam group @ Steamcommunity.com

:D July yay
I really like the leveling up idea.
and ooo a WINchester...... :D

These are old pictures... :S

Yes they are - at least to most of you. This post is much more about me explaining my state of mind than it is showing off new content. There will be plenty of time for that too, don't worry.

Yup. It's also to update people who haven't been following the mod though. =P

Except "highrise" all the other maps are conversion of SO , so yeah it's looks old^^
By the way, do another beta subscription is coming?

There are other custom maps in the works that I have yet to show everyone that aren't originally from HL2 or HL2DM or SO, don't worry. =P

No more beta testers are being accepted at this time seeing as we expect the first public release of the mod to be sometime in July.

Everything looks awesome, except for "highrise". The structure itself looks good, but the background doesn't match at all. Maybe try making it look shorter by switching the ground texture and adding a couple background buildings.

The idea with ls_highrise was to make it look like you were alone on top of the world looking down at everyone else. I don't see how the 3D skybox doesn't match the playable area of the map, but I suppose it's a matter of opinion.

Well, at the ground its night and on the roof its late afternoon, plus the texture of the building sorta makes it seem like it would be smaller.

At high enough altitudes, you'll be able to see the sun setting or rising before the light reaches the ground far below you. Granted it's only for a few minutes or whatever, but that's what I was trying to capture with this 3D skybox.

Not the best example, but here's what I'm talking about:
Thompsound.com

I see. Good job then.

If only you could try before you commit yourself to a download... that would stop people explaining. Problem is, everyone judges a game by how it looks. You could make the worst game in the world but add some flashy graphics and it would make someone say: "looks good!"

You could make the best game in the world but use old graphics and someone would say: "seen it before." UGH annoys me aswell hehe.

So, i'm gonna say that your mod urrm... emits vibes of fun...? xD
Looking forward to the release.

I'm glad you understood what I was going for with this news item, can at least see things the way I see them and agree with my conclusion. Thank you.

I'm impressed.I will force all my friends to download.Prepare the servers.

DON'T USE HL2 MODELS OR WEAPONS ARG, I HATE WHEN MODS USE THEM, IT ANNOYS ME. Make your own weapons instead of ripping off the weapons from other games, if I wanted to use HL2 weapons, I would play HL2 DM or something like that. Plus it's been used in a mod almost exactly like this, it was jsut HL2 DM with a leveling system, with a mediocre upgrading system that just increased all weapons damage instead of single weapons.
I'm really curious to see how you do the upgrades, are there going to be attachments, so say like CoD. I would love to see something like CoD incorporated into Source! (With out the stupid perks) :D
Also it would be impressive to see some kind of Killstreaks, I know it's something pretty easy to do.. but not many actually make it look good, just a plain text gonig over your screen saying "Double Kill" and such, anyways GL!!!

Oh woops, didn't read the little part about killstreaks, try to make them more interesting than the example I gave above, and once again good luck. Looking forward to the release!!! :D

It's easy to say not to use HL2 weapons because it looks too much like HL2DM, but we've added lots of new weapons from the HL2 universe that the player has not been able to manipulate before, like Alyx's Gun and the vortex hopewire grenade.

Our upgrade system is not mediocre, and it certainly doesn't focus on increasing weapon damage. In fact, we've taken great care in diversifying our upgrades while keeping things balanced so that a level 1 Engineer still has a fighting chance against a level 30 Tank.

As for attachments, we haven't implemented any CoD-style system yet and doing so would get rather complicated (though it is most certainly possible), so perhaps that's something we do in the future. I am trying to get simple things like laser sights though, which should make things interesting.

And yeah, as you've just discovered, Quake sounds have been fully implemented by default, though they can be toggled on and off by admins. Even if they are off though, players will still be credited with additional experience for killstreaks, headshots, melee kills, explosive kills, etc.

One of the most perfect hopwire grenades i've ever seem on a game, most of them were complete FAIL, this one seems that is going to be different.
The class based gameplay is a pretty nice idea, as well as attachments and skills, I'm looking for this game and if you need any idea, you can brainstorm with me, or I can give some suggestions, PM me in any case, or if you need anyone for talking with, i'm a good friend.