Hi there! The Greenlight and IndieGoGo campaigns are still running, a new demo version is online and Legends of Pixelia got some first media coverage. Excited? Read on!

Hi there! The Greenlight and IndieGoGo campaigns are still running, a new demo version is online and Legends of Pixelia got some first media coverage. Excited? Read on!

Some players from demo version A0.01 reported that they didn't have a chance to survive the very first dungeon floor. That's why I nerfed the first two dungeon floors and added some native healing to newly created heroes. All of the changes below should help new players to survive the first ten to twenty minutes and therefor help getting new players into the game. I'm also working on a tutorial for a future version. 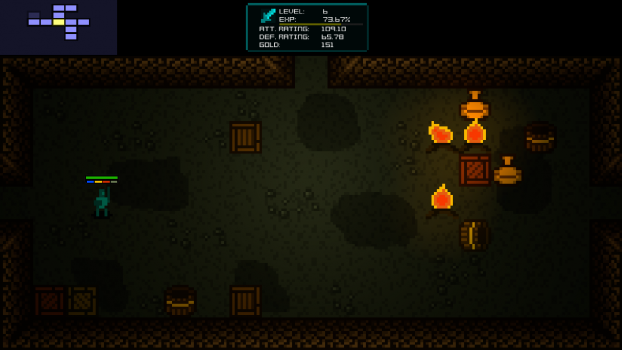 Want to help me with the development of a tutorial for Legends of Pixelia? Play the demo and try to answer the following questions afterwards:
- How do you like the controls?
- What do you think about the difficulty?
- Did you manage to beat the first boss? How many bosses did you beat?
- Did you open up the "How to play" screen?
- Did you try local multiplayer with a friend (plug in some gamepads)? How many players? Please describe your multiplayer experience.

Some indie gaming pages wrote about Legends of Pixelia a few days ago:

"There are some gameplay elements that old school beat ‘em ups had yet to refine in the early days, and many modern players now lean towards more actionable experiences. The upcoming Legends of Pixelia looks to combine the best of both worlds." Luke Siuty

"Legends of Pixelia is an excellent pixel art action RPG with gameplay reminiscent of The Binding of Isaac, but with more tactical combat, persistent upgrades and local multiplayer." Calum Fraser

"Legends of Pixelia features distinctly lo-fi graphics and combat mechanics that remind me more than a little of brawlers like Final Fight or Streets of Rage." Craig Stern

Also don't miss the video of Highsight testing Legends of Pixelia A0.01:

If you haven't done it yet, please vote for Legends of Pixelia on Steam Greenlight and preorder it on IndieGoGo.

Preorder Legends of Pixelia on IndieGoGo

I did a lot of PR work the last days, but that's part of the project, too. :-)
A big thanks to the Indie DB Team for featuring Legends of Pixelia last week - you are great!
Next up will be a tutorial, the third dungeon and the implementation of the sentinel class. Stay Tuned!