Today is the last day of Legends of Pixelia's Kickstarter! Also, I've got some reviews and development news for you. Read on.

Hello. Today is the last day of Legends of Pixelia's Kickstarter! Also, I've got some reviews and development news for you. Read on.

If you don't own a copy of Legends of Pixelia yet, you might want to use the last 24 hours on Kicktarter to get it cheap. :-)

A quite detailed review/ playthrough by @orcchief on Indie Retro News:

"Something I found interesting was the inclusion of flying monsters. You will find many bats in the second dungeon [...][the Winged Cave]. These flying critters reminded me of the bats in the second level of Pitfall II (Atari 5200 version) except these Legends of Pixelia bats will swarm and will send out sonar-like ranged attacks that ping off walls which can hit you in the back, so watch out for those." Read more (click!)

A 2 hours run through dungeon 1 made by ZombieNinjaPirate. He did a live stream session and uploaded it to YouTube, check it out:

When fully clearing a big dungeon, you usually do the boss room last. The problem: Sometimes it is hard to remember where the boss room is since all of the rooms on the minimap look the same. A player suggested to add unique icons/colors for boss rooms and treasure rooms. They are implemented and will ship with new version on June 17th: 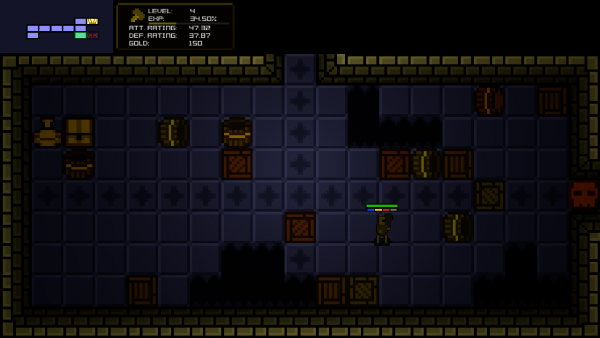 A Kickstarter supporter saw the new visual style that adds a small black outline around characters. Although he admits that the new style looks cleaner, he really liked the Atari vibe of the old graphics. The June version will offer an option to choose from multiple styles. The gif below shows the three different style modes (default, no-outline, no-outline&flat-light) :

Thanks for the support and the feedback. Steam release next week, stay tuned.