Doin' a quick catch-up on the progress made the past weeks for LBKR's next update.

Work on LBKR continues as usual, been putting together alot of world chunks for the final chapter, currently there are 25 chunks game-ready but alot more to be done!

I've created the primary minion that the new player class "Puppeteer" will be able to summon, it's a puppet (... who could've guessed? ;) ) The ability used to summon the minion has three modes, the first mode will summon a puppet that deal only physical damage, second mode may summon up to three puppets that inflict random elemental damage and the third mode summons a single large monster puppet.

Hastily moving on to visuals, in previous versions of LBKR I've generated flat meshes at runtime for blood stains and splatter however, I recently noticed that this method was to a relatively expensive cost once entering the Wildlands (Chapter 6), as the system I wrote to handle this relied heavily on extra world colliders. The old system worked fine for the first five chapters as all world colliders are fairly simple and originally, LBKR was only supposed to have 5 chapters, it wasn't until last year that I decided to add another 5 of 'em and that alot of the new chapters would take place outdoors or in caves with more detailed ground etc. therefore involving more complex colliders. 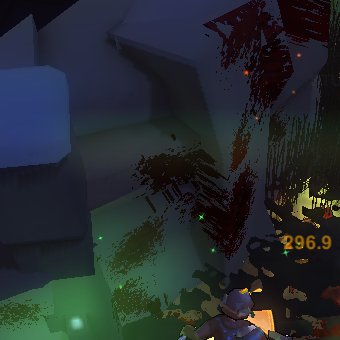 Anyways, I'm now using projections instead to simply bolt blood stains onto any surface that I allow to receive projected decals. As all extra colliders necessary for my old decal system are now unnecessary I've decided to clean up all old world chunks from them, and I'm currently half way through, more or less. ( Which I find to be quite good... considering the current unique world chunks count is about 600 or so chunks. )