Lawnfax is a open world survival game The game takes place one year after Bataan has gone through a massive disaster known simply as "Blackened" which included mysterious toxics that occupied the sky causing total darkness in the world. New lifeforms began appearing that spread throughout the Bataan. Find way to escape the island by exploring while maintaning your hungerbar and avoiding alien creatures. Discover interesting creatures and places. Find what is the real cause of plague. 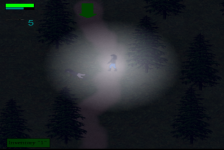