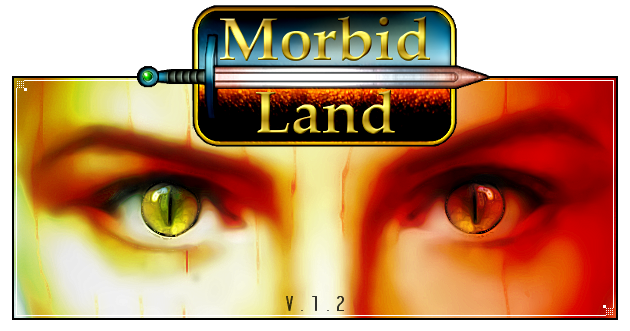 The main change in this update is that now Morbid Land will close this first episode as a Full game with beginning, middle and end.

Thus, there are no further episodes! Stay calm, however, I'll explain ...

Working with the idea of Episodes was a compulsory idea. This would make me focus on extending the game and not improving it! And I really do not think it would be worth it in the end because I would limit myself quite a bit in further improving Morbid Land. But no worries ... This does not mean that the game not will have new updates or even a expansion in its future. :)

The Morbid Land, Episode 1 will be renamed as Morbid Land, and the possibly being able to fight Valkyrie. Thus finishing the story and this first game. The ending was changed a lot, quite drastically, but it will further give you details on the history of Morbid Land’s setting and characters, plus a lot of improvements that you can check in the changelog below.

The movie of the game was slightly modified, in now that it is formatted without references to Episodes.

This update is mandatory for those who played the game and liked it, and also for new players who want to venture into the world of Arhaaty because it is now much more apt in the performance end of how the game works, and brings a bunch of improvements all around to the game’s scenery and intuitive gameplay design.

Below you can see all the detailed modifications.

Now you can discover many things about Valkyrie and her past .
Learn about Hidden mysteries of the game.

1) Valkyrie is inserted into the game!

2) New Scenario plus game setting - Martuck - where the final battle with Valkyrie happen.

3) End of the game, Full and with narration ... Unveil the secrets of Valkyrie and Arhaaty!

4) Improved the accuracy of the speed of the animations ... they are now 100% accurate.

5) Error in the Arena was removed.

6) Many errors related to relocation and resumption of variables, lighting and general elements of the game. Fixed!

7) Error hotkeys that sometimes got lost between activated or not ... Fixed!

8) Controls and keys that should be blocked in certain game screens are now blocked ... Fixed!

11) Updated the Engine basis for the Irrlicht 1.8.

12) Improved the animation of the npc's fighting in the arena.

14) Volume of shooting guns was not being changed by the overall volume of the game. Fixed!

17) Small change in mission of Salazar.

19) Some Images and modified screens.

20) Alternative key for defense was changed from G to Q. Is much better! Thanks to Tony for the tip.

21) System of Episodes no longer exists. MORBID LAND is now a game complete
with beginning, middle and end.