Posted by RunWTheWolves on Nov 3rd, 2016

As usual I have neglected this website and haven't posted anything in two months. However I have a lot of new stuff to share so hopefully that will make up for the lack of updates. Let's get right to it!

I have finally put the shop into the game. It's still WIP but it's mostly done. It's fairly straight forward, you walk in, the shopkeeper has random wares which you can buy if you can afford. You can also sell anything through your inventory while in a shop.

Up until now there was no real way to obtain GOLD, which is the main currency in the game. The only way to get gold was by using DEV shortcuts. So it's about time I put GOLD in game. Gold and Gems now flies out of chests and enemies. Different colors and sizes mean different values.

This is perhaps the most fun thing I have implemented int WishGranter so far. I wanted enemies to die differently when the cause of death is an explosion so I went ahead and created a GIB system. Each enemy type has specific giblets that fly out when they explode (so we don't end up with multiple skulls and ribs for a single enemy!). Then I ended up using the gib system for barrels and other objects too.

Apart from the giblets, the combat also felt like it was missing something so I added a new procedural blood decal effect. So far it only hits the ground but soon I will make it interact with walls as well.

I implemented a new Death animation for the player and improved the art of the 'YOU DIED' screen. This is the first time I have noticed the improvement so much but I need to draw a line somewhere because otherwise I will keep going back to re-draw everything. 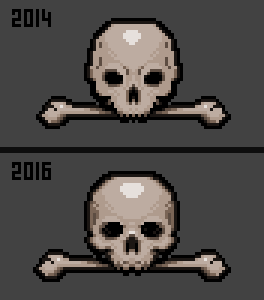 5: The Heart and Dungeon Complete Sequence

At the end of each dungeon there will be a Heart. These Hearts are what the Wishgranter is sending you to retrieve from the dungeons and through them is how you will interact with the Wishgranter to exchange souls for rewards and unlocks and also progress the story.

Below you can see the brand new Heart and Dungeon Cleared Sequence. Before it sucks all the souls out of you, there will be an interface to spend the souls on 'Wishes'. However even the souls you do not spend will be taken by the Heart.

Here is a bonus GIF of the Lich Boss causing some Collateral Damage!

That is all for this update. Stay tuned on the project's tumblr devlog and my twitter for the latest updates. Thanks for reading and hope you like where the project is going!