Posted by RunWTheWolves on Feb 4th, 2017

Up til now I have been developing and testing each feature individually in test rooms but now it's about time to put everything together into a more complete game. As expected, this led to a bit of a mess with most features miss behaving and not working well together so I have been revisiting each feature and tweak everything to make it all work, as well as updating and improving visuals to get the game ready for a Steam Greenlight trailer.

Below are some of the features that have been updated and added:

Some traps (like the spike trap) got some new sprites as well as been updated to be triggered and effect enemies instead of just the player. New traps have also been introduced like the FrostBolt trap, which freezes whatever it hits for a few seconds leaving them completely vulnerable to attack, and the Rolling Pin Trap which simple rolls over and demolishes everything in it's path (including the player!).

Potion sprites are completely re-done and now each potion comes in small, medium and large. The potion quaffing system has also been redone so that the player cannot simply consume potions in the inventory but instead will take time, being exposed to attack. If the player is attacked during the quaffing animation, the potion will be dropped and animation interrupted. This is so the player will need to strategically plan ahead instead of just relying on an inventory full of potions. 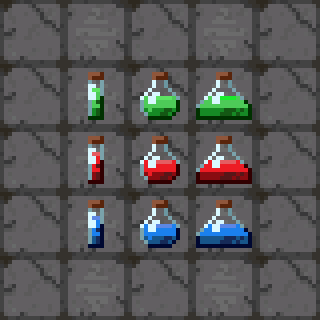 Main Weapon visual generation has been re-done to allow for much more variety with new blade shapes and dynamically generated color schemes. Colors are used to reflect either the quality of the weapon (dull colors might mean the weapon is not that great while a gold or shiny weapon might be a very good weapon) or the Element Effect (A sword with fire elemental damage would have reddish or warmer colors than usual).

I have been messing around with colors for Dungeon Tile Sets so that the backgrounds changes along with the tileset instead of being simply black. I'm still tweaking around with colors to see what works best and also since it seems to be a bit too dark on certain displays (you might think it's still black!). Also entrances to special rooms (like shops) will have clear signs so the player knows what to expect even before walking into the room. You can see the entrance of the Shop and the Regular Dungeon Tileset below. 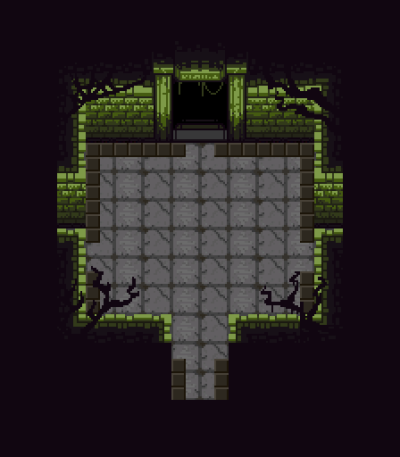 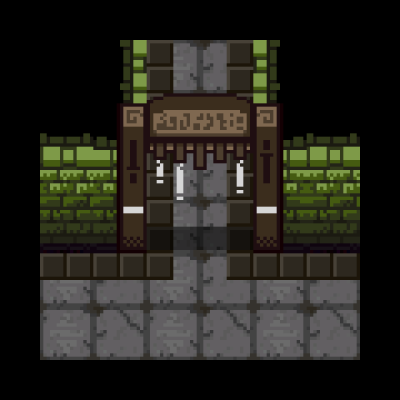 I added a lot of new animations and particles for most of the existing features. See the new chest animation below.

That is all for this update. Stay tuned on the project's tumblr devlog and my twitter for the latest updates and keep an eye out for the GreenLight trailer and Campaign coming soon! I hope you like the project so far and thanks for reading!

Really like the pixel aesthetics in this game! Will keep an eye out for the Greenlight campaign via Steam... Good luck guys! =)

I'm loving the animation work you have going on. It's very fluid and pretty looking. Best of luck with Greenlight.

Looks cool, I will track tim to time.