Here are the latest developments on the Wishgranter. Most of the work done this month was focused on combat feel and enemy AI improvements.

Posted by RunWTheWolves on Aug 6th, 2017

Lots of new stuff this month focused on making the combat feel better and making each enemy feel unique and challenging. Let's get on with the highlights!

First up, completely re-done the destructible objects in order to look better and feel more impactful. Added new debris system and new particles which when put all together feels much better than what I had before.

Also put the exploding barrels in the game along with some new smoke particles. Exploding barrels are pretty dangerous but can also be used to your advantage as we'll see later on!

The slime enemy has been revamped with new trail effect and particles. In order to make each enemy feel like a different kind of challenge, there are several ways for enemies to attack. The slime doesn't have an exact 'attack' animation or cycle but instead attacks during it's normal walk cycle. This makes it very hard to fight without taking any damage, so even if it does do very low damage with each attack, it can be deadly for the player to face it when on low health.

The Zombie also got a big revamp, maybe the biggest one yet with a very unique attack!
While zombies can still just swing at you like other enemies, they also have a special grab attack. Unlike the regular attack, the grab attack has a longer wind up and cannot be staggered (meaning will not be stopped when attacked unless he receives a killing blow). Once the player is successfully grabbed, the Zombie will start chomping away mercilessly until the player manages to free himself. Chomping doesn’t do a lot of damage but the player is open for any other attacks from other enemies - for example, the Lich boss summons zombies to grab the player, leaving him open for it’s high damage attacks.

Here is an example of using the exploding barrels for your advantage.
Zombies are pretty dumb!

Just like the white flash added last month to help with hit detection, I added a couple more visual tells to help the player keep track of what is going on on the screen. When the player receives damage or scores a critical hit, there is a slight freeze frame which really delivers the impact making combat feel much better. Also added a simple sprite effect to critical hits to further increase their impact.

For enemies I added a specific tell (Flashing Yellow - Not pictured great in the GIF above unfortunately) for when the attack that they're winding up cannot be interrupted or blocked. This tells the player to quickly get out the way!

Finally started working on character generation and designing the various aspects of it. Once your character falls in the Wishgranter, you will have to pick one from a selection of available generated characters. These characters will have a class, name, gender, basic attributes (Attack, Defense, etc, - we'll get into these next month) and most importantly traits. 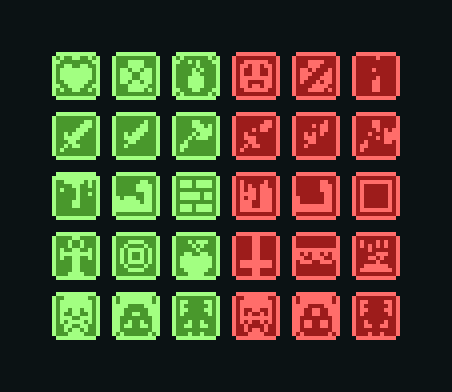 Traits will be what will set characters apart the most (except class) as it will have a significant impact on gameplay. Traits include things like being great or terrible with a specific weapon type, Take more damage or deal more damage to a specific enemy type, get more health from food, find more or less gold or souls etc. Each character will have good and bad traits.

Started work on character selection as well where the player chooses their new character from a set of 3 or more generated options. I decided to include a much higher resolution depiction of the class in order to help with presentation, give more character to each class and help the player understand what the character actually looks like outside of the 16x16 character sprite! 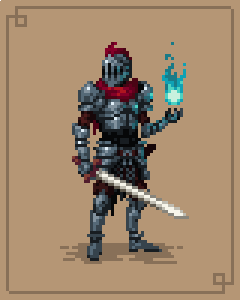 So far only the knight class is available so this might not look like much, but here's a first look at a VERY EARLY WIP character selection. Much more on this next month!

That is all for this month!
Stay tuned on the project's tumblr devlog and my twitter for the latest updates.
Hope you like the project so far and thanks for reading!