The U.S. Navy says its new laser weapon works and it will use it if it has to.

The laser weapon system (LaWS)—a cutting-edge weapon that brings significant new capabilities to America’s Sailors and Marines—was for the first time successfully deployed and operated aboard a naval vessel in the Persian Gulf. 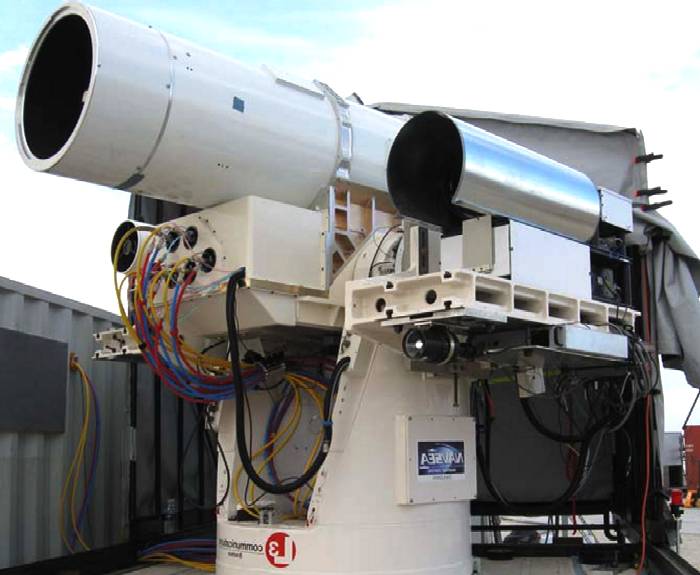 The operational demonstrations, which took place from September to November aboard USS Ponce (AFSB[I]15), were historic not only because they showed a laser weapon working aboard a deployed U.S. Navy ship, but also because LaWS operated seamlessly with existing ship defense systems. 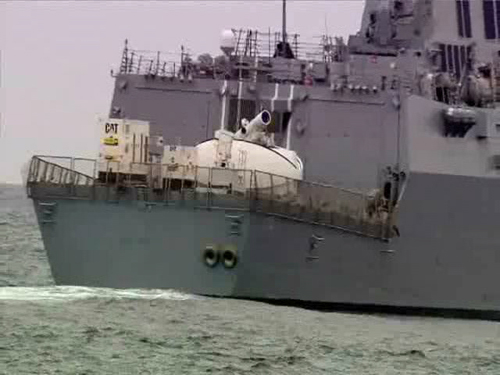 “Laser weapons are powerful, affordable and will play a vital role in the future of naval combat operations,” said Rear Adm. Matthew L. Klunder, chief of naval research. “We ran this particular weapon, a prototype, through some extremely tough paces, and it locked on and destroyed the targets we designated with near-instantaneous lethality. 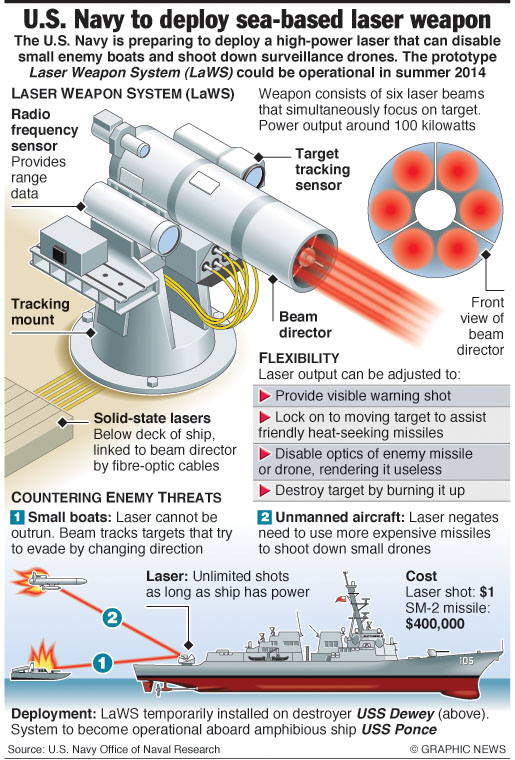 Sailors worked daily with LaWS over several months since it was installed, and reported the weapon performed flawlessly, including in adverse weather conditions of high winds, heat and humidity. They noted the system exceeded expectations for both reliability and maintainability. 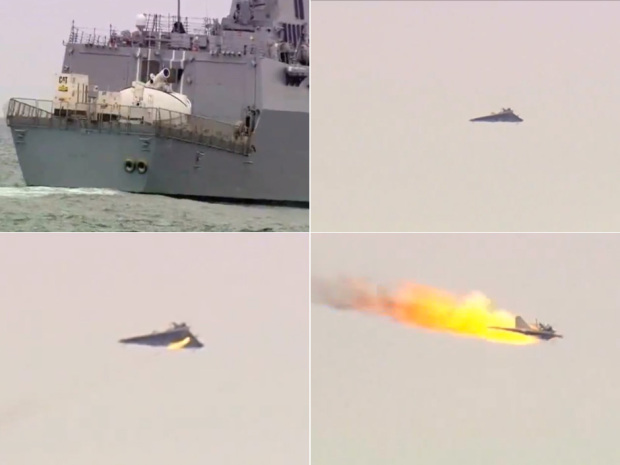 The system is operated by a video-game like controller, and can address multiple threats using a range of escalating options, from non-lethal measures such as optical “dazzling” and disabling, to lethal destruction if necessary. It could prove to be a pivotal asset against what are termed “asymmetric threats,” which include small attack boats and UAVs.

Data regarding accuracy, lethality and other factors from the Ponce deployment will guide the development of weapons under ONR’s Solid-State Laser-Technology Maturation program. Under this program, industry teams have been selected to develop cost-effective, combat-ready laser prototypes that could be installed on vessels such as guided-missile destroyers and the Littoral Combat Ship in the early 2020s. 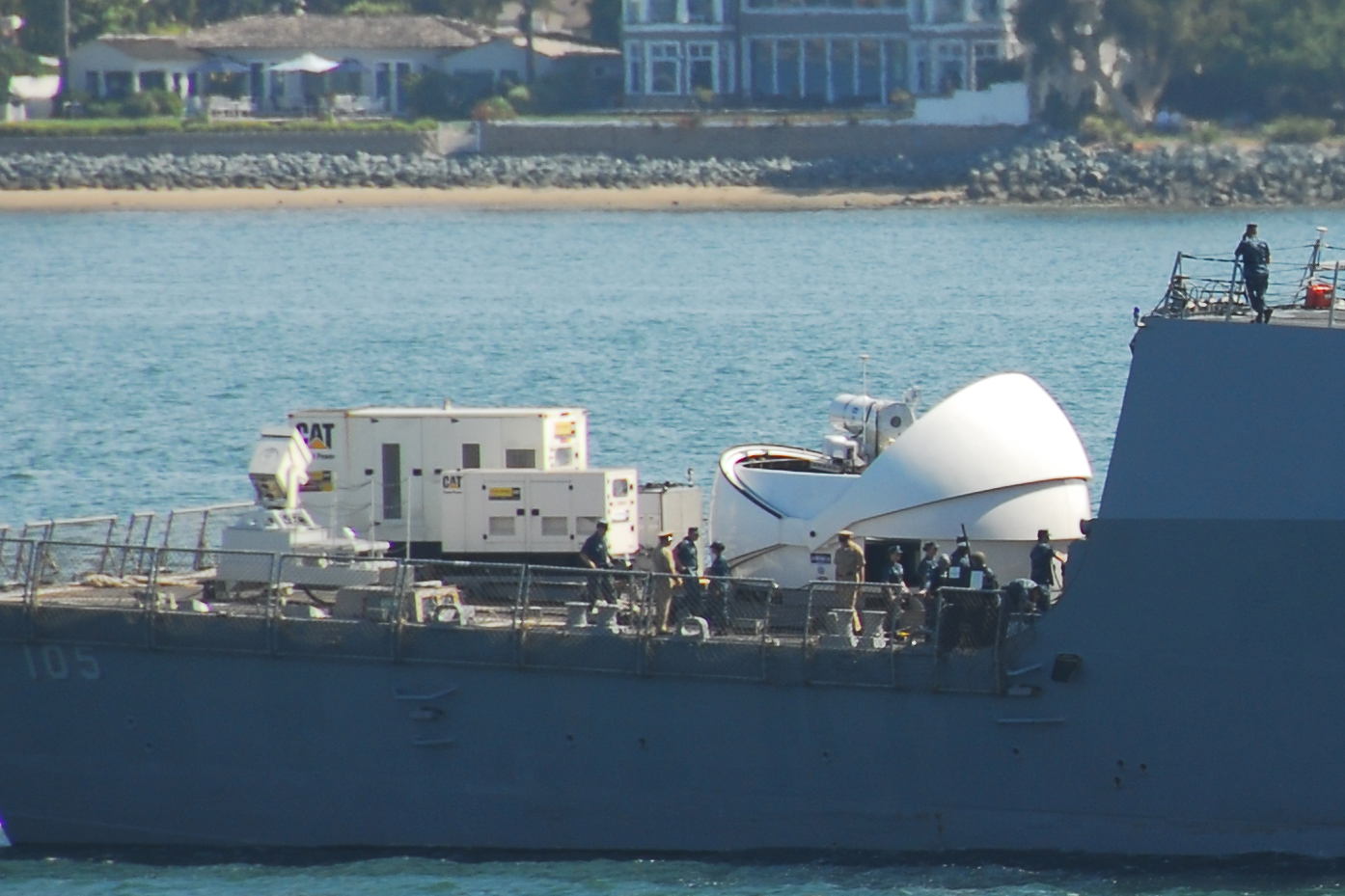 While laser weapons offer new levels of precision and speed for naval warfighters, they also bring increased safety for ships and crews, as lasers are not dependent on the traditional propellant and gunpowder-based ordnance found on ships. Lasers run on electricity and can be fired as long as there is power.

“At less than a dollar per shot, there's no question about the value LaWS provides,” said Klunder. “With affordability a serious concern for our defense budgets, this will more effectively manage resources to ensure our Sailors and Marines are never in a fair fight.”

The Navy already has demonstrated the effectiveness of lasers in a variety of maritime settings. In a 2011 demonstration, a laser was used to defeat multiple small boat threats from a destroyer. In 2012, LaWS downed several unmanned aircraft in tests during naval exercises. Specific details on next steps and timeframes are being determined as the data from the current demonstrations are analyzed.

The announcement confirms continued significant progress on directed-energy weapons, and meets the timeframe announced by Chief of Naval Operations Adm. Jonathan Greenert at the 2013 Sea-Air-Space Expo. Greenert will be the opening speaker at the upcoming Naval Future Force Science and Technology EXPO in February 2015, where many of the innovative technologies coming to fruition for the Navy and Marine Corps will be on display. Videos in comment section!!

I wonder when will they use it for real O:

This is the UAV killer.

Which is about the height of its capabilities lol.

It can do more like it said in the article = In 2012, LaWS downed several unmanned aircraft in tests during naval exercises. It can shoot also people they going to make it also for airborne and ground-based weapon systems. only a tank (armoured vehicles) i do not know yet but maybe they need a couple of shots.