Imagine dozens of fast and deadly enemies that you can't hide or run away from. How do you deal with that?

Imagine dozens of fast and deadly enemies that you can't hide or run away from. How do you deal with that?

In Myriavora the tool that's given to you is crowd control, and because it involves so many opponents, I think it's fair to call it large-scale crowd control.

When you create a character in Myriavora, you need to select four out of (currently) seven availabe attacks, and all of them can be used to damage as well as control enemies. The catch is: depending on how you use them, they're good at either damage or control, but usually not both at the same time. It's up to you to find the right balance.

How it works: ice & plasma

Take, for example, the ice & plasma attack. It lets you shoot aimed ice missiles at a distance of up to 75 meters. This will freeze spiders for a couple of seconds while slowly dealing a little bit of damage. Frozen spiders can neither attack nor move, so you've bought yourself some time.

What to do with that time? Well, you could shoot more ice missiles at them. Ice stacks, so they'll be frozen for longer, thus sustaining more damage. However, the damage is not dealt quicker, which can become a problem.

Rage is always a problem

You see, in Myriavora all spiders build up rage over time, whether they're frozen or not. The more rage, the faster they run and the harder they attack. Rage also lets them eat through ice faster, so if there're too many spiders you won't be able to contain them indefinitely. Better look for a plan B!

A much better option might be to use these precious moments of not being under constant attack to charge the generators, but that's a big topic in and of itself, so I'll discuss this in a separate article. Let's just ignore it for now.

Instead remember that the attack is called ice & plasma. So how does plasma come into play? And what is it good for?

Well, all attacks (except double jump) have two fire modes: aimed and spray. The aimed mode is far range and triggered with the left mouse button, while the spray mode is close range and triggered with the right mouse button (you can rebind them to different buttons or keys in the options menu, though). The minimap shows a long, vertical line and a small circle to indicate the range of these modes. 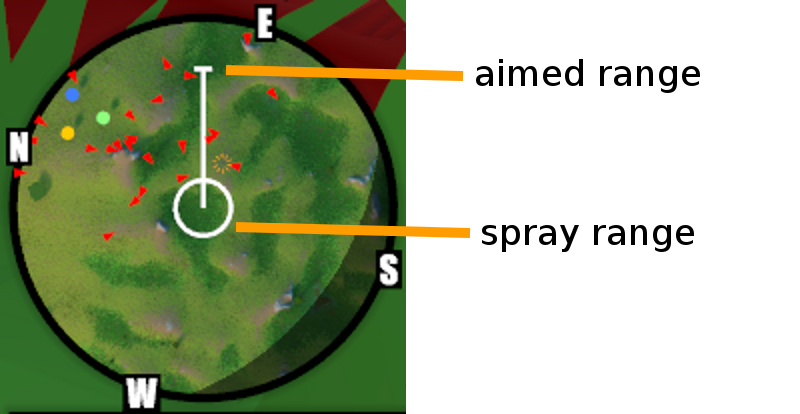 The ice & plasma attack is unusual in that it shoots different missiles depending on the mode you use: ice in aimed mode and plasma in spray mode. So, in order to fire plasma missiles you first have to get close to enemies, closer than 15 meters to be specific. The right mouse button will then shoot plasma missiles at random spiders in range. Yes, random spiders, as the name "spray mode" suggests. The only way to attack a specific spider in spray mode is if it's the only spider in spray range, which rarely is the case.

When a spider is hit by a plasma missile it sustains fire damage. The amount depends on the temperature: frozen spiders sustain a huge amount, whereas spiders at normal or high temperatures sustain very little. This means you should use plasma only when most if not all of the spiders in spray range are frozen. Of course, plasma builds up heat, which eventually will melt the ice, so you'll probably need to switch between ice and plasma occasionally.

Basically, ice & plasma works like this: you freeze a group of spiders and then either try to get away while they're "busy," or approach and try to kill them with plasma. This dichotomy exists with all the attacks in some way. It forces you to make tough decisions constantly, and helps to keep gameplay interesting over quite some time.