We've made the decision to make a cut in Legends to release it sooner. The story will continue in a new version of Legends with our own custom engine, which will no longer give us any creative limits like the old Goldsource engine did.

In July we've announced a development break for the Land of Legends mod. We've pretty much enjoyed our time in the sun this summer and in September we got the team back together to discuss the course of the mod.

Even though the break gave us some creative impulses, the Half-Life (Gold-Source) engine is too limited to reach what we want to create; a big world with a lot of options. That's why we are currently experimenting with our own engine! We are still very much interested in making Legends, so the decision has been made to make a cut in the Half-Life version and continue the story in our own engine. This is a classis win-win situation, because in the new engine we get to create what we want and by making the cut we'll boost the development status up to 90%, which gives you the chance to play this sooner. All content made for maps which are going to be cut, will be integrated in the existing maps so they will also be richer and have more variation. After the cut Land of Legends will still have a decent size of 11 maps, so that's not all that bad.

We don't have that much new stuff to show, since the last maps are still in pretty early stages, but here are some shots, that will hint which direction the last map will have. 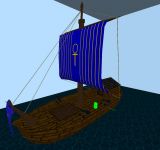 Thanks for tuning in with us and we'll try to update on a monthly basis again from now on!