Today we are showing off the main fighting knife for our French army.

Today we have a smaller update, with a render of a French trench knife. Also remember that Slayer's tutorial series has continued going in the background and is now sitting at episode 13. You can see the full playlist here. 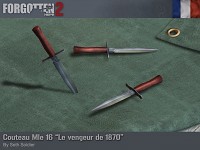 The Couteau Poignard Mle 1916 combat knife was developed in the middle of the First World War as a proper replacement to the various ad-hoc fighting knives that had been crafted for the French Army. A handy weapon, it was perfect for the tight confines of trench combat and would continue to be issued right up until the start of the Second World War. Also known as Le Vengeur de 1870 in reference to the Franco-Prussian War, these knives would also see use by the Germans after the fall of France. Ours was made by Seth Soldier.

That's all for this week, but be sure to come back on Monday 10th May for another update to coincide with the start of the Invasion of France. Until then, feel free to visit our Discord, our public forums, our Twitter, our subreddit, and/or Facebook pages to discuss this update and other news.