Today we are showing off the Lorraine 37L, an armoured supply vehicle that would provide for the tanks as the UE did for the infantry.

Today we are showing off the Lorraine 37L, the principle armoured supply vehicle for the French armoured units in 1940. 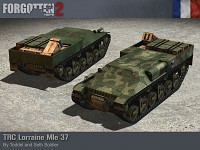 In the early 1930s, the French had adopted the Renault UE armoured tractor to provide mobile supply to the infantry in the field. However, it was considered to be too lightly armoured and not have the range to be able to keep up with tanks, and so a new vehicle was needed. In 1936, the formal request was put out, and the next year Lorraine-Dietrich returned with a prototype. In initial trials that year it was rejected for being underpowered and was returned to the factory.

The old engine would be swapped out for a 6 cylinder Delahaye 135, a powerful engine that was seeing success in racing cars at the time. Mated to a new stronger transmission, the armoured tractor now had the speed to pass the trials and was accepted for service just before the end of 1937.

Orders for the 37L would slowly trickle in, with production picking up at the start of 1939. 212 had been delivered by the outbreak of the war out of 556 ordered, and in the sudden rush to arm new armoured units a further 1012 were ordered. By the time of the German invasion, only 432 had been delivered. They were prioritised to Char B1 battalions, but were never available in sufficient numbers. Over 300 were captured by the Germans, who took a liking to the rugged suspension and used them not only in the supply role but also as mounts for various self propelled artillery pieces.

Production would continue in Vichy France as unarmoured agricultural tractors, with armour plates made clandestinely and stockpiled. Many of these vehicles were shorter than the original, and would be used by the Free French in 1945. Our Lorraine 37L was made by Seth Soldier, adapted from our Marder I made by Toddel.