Today we are showing of our Berthiers - the most common rifles in French service in 1940 during the German invasion.

Seasons Greetings to all of our fans! As 2020 draws to a close we have one final present to show you, and it's a big one. When you play Forgotten Hope 2, you inevitable spend most of your time with your trusty rifle, and for France that rifle is the Berthier. 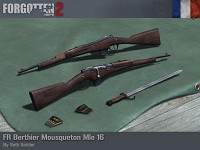 The Berthier Mousqueton began as a replacement for the single shot blackpowder Gras carbines that the French cavalry were still issued with in 1890, four years after the introduction of the modern Lebel rifle. Attempts to design a Lebel carbine had not progressed well, and a design by Emile Berthier was chosen instead. This original carbine had a 3 shot Mannlicher magazine and was produced in 2 main variants: the model 1890 for the cavalry and the model 1892 for the artillery. The artillery carbine would prove to be a very handy weapon in the confines of trench warfare, and was issued much more widely than originally intended. 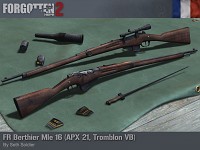 Alongside the carbines, in 1902 and 1907 longer rifle length versions of the Berthier were made for Indochinese and Senegalese soldiers respectively. When production of the Lebel was unable to keep up with the sudden demand of the First World War, the Senegalese rifle was modified to the 1907-15 pattern and put into widespread production. This update was minimal - the bolt handle was straightened and the muzzle was changed to accept the Lebel bayonet.

Experience during the First World War showed that a number of improvements were needed to the Berthiers, and this culminated in the M16 models. These featured a new 5 round capacity magazine that brought the rifle to parity with other rifles of the day, a dust cover that closed off the large hole in the magazine floor plate, an upper hand guard and a thick front sight post for quicker target acquisition. This post has a thin groove cut into it for more precise long range shooting. The 1892 artillery carbine was the first to switch to M16 production, with the 1907-15 rifle following after the war. Almost all of the existing Berthiers would be retrofitted with the M16 upgrades as well. Converted rifles and carbines would be marked 1907-15 M16 and 1892 M16 respectively, while new production of both were just M16. 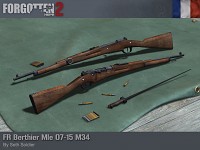 After the First World War, the French military decided that they needed to replace the obsolete 8mm Lebel cartridge. The replacement was ready by 1924 in time for the new light machinegun (with a 1929 update), and focus turned towards infantry rifles. In parallel with a new design that would become the MAS 36, a conversion was also made of 1907-15 Berthier rifles to the new cartridge. This conversion used a more conventional 5 round box magazine fed with stripper clips and had a shorter barrel, but kept a lot of the other original features of the Berthier. These rifles were the model 1907-15 M34.

In May of 1940, the M16 Berthier was still the most numerous rifle in the French inventory. It would serve alongside the M16 Mousqueton as the primary arm of most of the conscripted army, with the 1907-15 M34 serving mostly with the professional units. The Berthier rifle was also capable of launching the Viven-Bessières rifle grenades and could be fitted with the APX21 scope as a sniper rifle - though it was not the preferred rifle for either of these tasks. All three of our Berthiers were made by Seth Soldier.

That's all for this year, but be sure to come back next year for more. Until then, feel free to visit our Discord, our public forums, our Twitter, our subreddit, and/or Facebook pages to discuss this update and other news.