The ObsessionSoft team is proud to announce that they will be releasing the long awaited Kreedz Climbing Beta4.2 update just short of Christmas this year. Click the title for new screen shots, the best bits about the update and the 4.2 Trailer/Teaser.

Hello Kreedz Climbing fans, Beta4.2 is almost on your desktop. If you were unhappy with any previous version, this will be the version you will want to try out as your second chance for us.

It has been one seriously long and silent year for us in the public eye. A lot of blood, sweat and tears went into this version of the mod. We have had a few changes in staff, losses and additions that slowed us down, but in the end worked out for the better. However, this time we can proudly say that this version feels more like CS1.6 Kreedz jumping than it ever did before. Those who love Kreedz maps in CS1.6 will feel right at home now. You will be able to do everything you can do there, but with so much more! Our new game modes add a really exciting twist to the game. 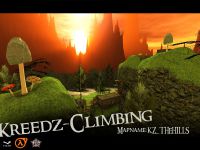 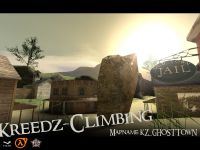 A short list of the best things about this update: 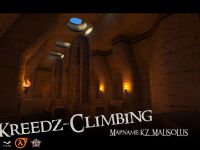 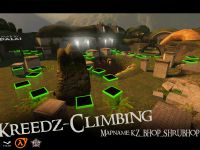 We have taken the time to completely re-vamp our appearance here on the site by adding new screen shots of all of the official maps, and created a more fitting explanation of what this mod really is. To view our page again please visit this link: Moddb.com

In case you missed it, we now offer you our YouTube version of the Beta4.2 Trailer. Watching this will help you realize that there is more to the game than just jumping around.


At this time, we would like to advertise the fact that we are in search of a talented modeler who can assist us in finishing or creating the proper hand models for our various player models. The work that is done will appear in our final version of the game, which is intended to be our very next update after the release of Beta4.2.

Stay tuned for more goodies shortly before we make the actual update! Until then, Happy Holidays!

great to see this as a mod but there's still a lot to do.

What always bugged me about this mod is the "fall-dowb-and-start-all-over" setup (I would have prefered a 10 sec replay option). Now maybe with the rope you can safe yourself in some cases, so that's good.
I also never got along with the controls very well. It felt like I was tapping too many buttons at one time. I suppose that's something that goes away with more practice, yet I never got past the first maps before I lost patience. Let's try this version, see what it can do for me. Maps are looking beautiful and interesting.

What you just said shows that you barely played it (or didn't know of the feature of saving your location which makes no sense if you played it more than 5 minutes).
The mod have a "save cheakpoint" system, in a click of a button you "save" your location and with a click of another button you can instantly teleport to it.
Controls? you can set them to whatever you want if you don't like them...

I know all of that and I have played every version so far - for at least half an hour. However, not so much the keys assigned to them, but the game mechanics themselves turned me down. Also, I don't want to save every ten seconds out of fear of doing something wrong, or tapping the wrong combination.

....
Firstly you don't have to save every second. Secondly the only buttons you press are [w][a][s][d][Shift][SPACE] from the default key setup. That's only 6 buttons. The only real key combination are [SPACE] + [a] + Arc Mouse Cursor or [SPACE] + [d] + Arc Mouse Cursor if your playing the default climbing maps. The controls are really not that difficult. Middle mouse button can assign a checkpoint and clicking enter will bring you back to the checkpoint. Assuming you have the ability to chew bubble gum and walk at the same time you won't have any problem saving checkpoints and reloading them.

I cant strafe-jump but its still fun to climb those maps.
Haven't played the hl2 version for a while...

Good to see KZmod is still going. I was craving some climbing the other day and this is a excellent surprise.

what is this soundtrack? it's really nice?

aaah, got it:
Michal feat.﻿ Drut - Reflected In

How can you consider this mod is still in Beta stage? It's already a complete mod! (Even before this update)

Because its still not the way we want it to be. There are a few elements that needs to be implemented before its going final.
But i agree, it allready offers loads of fun :)

The final version will include the multiplayer aspects of the original plan. Now that the game has enough different modes of play (18), it is time to advance to making the automated tournaments and something I call

Hey, is this like the BunnyHop stuff that u do in CounterStrike?