A (long-overdue) update on the development of Kitty Galaxies, containing 100% of your RDA of spacecraft blasting the fracking hell out of each other! Oh, and cats too ;)

Hello, are you sitting comfortably? Good. This is a massive update making up for of the lack of updates so far, so let’s get the bad news out of the way first before we tell you about the awesome stuff …

The Elephant In The Room

The problem with life is that sometimes when you are working hard on something, life will throw a curveball. In August we were doing just that, working hard on the game, however our lead programmer received some rather sad family news, meaning development was suspended for a few weeks. Then when September came around other priorities in life took over, and for a few weeks it seemed that development on Kitty Galaxies would have to be put on temporary hiatus...

However, thanks to some awesome things happening recently, development on Kitty Galaxies will continue, back at full throttle! Hurrah!

This leads us to the next point ...

The Problem With Greenlight

As we all know with Steam Greenlight only a handful of titles get past the gates and are released on Steam, and after approving 75 titles per month for a while it seems that none have been greenlit since August 1st. However, we at Yanxen believe in ethically promoting the game, meaning no spamming our game on other game’s forums, Greenlight pages, etc. Also we do not believe in the whole "giving away of free codes in exchange for promoting the game", since that is basically bribery, and also depends upon the game actually making it through Greenlight. Further, we have not been using unaltered stock assets from the Unity Asset Store (unlike what a lot of games on Greenlight have been doing). We believe this is conning the consumer and is plain lazy. Greenlight selection depends almost entirely upon votes, and to get votes one has to promote the game, which we have not been doing as of recent. Why? The aforementioned temporary suspension in development, combined with the need to hit with promo stuff in one big bang in order to get enough votes to make it through the process. We are still hoping to do that to coincide with the release of the playable demo that we have referred to over and over again. As for the question of when is that demo getting released? …

Where Is Development Up To At The Moment?

Right now we are developing the main part of the game, this being everything from flight mechanics to the HUD. When you see AAA titles at the likes of E3, PAX, etc, a lot of games magazines who have had hands-on time with that game will offer criticism of the title, hoping that the things criticised will be fixed in time for launch. In 99% of cases (and yes I just pulled the figure out of nowhere, but if you have followed gaming for as long as we have then you will be inclined to agree) those criticisms are not fixed, and are clearly present in the final release. However, the luxury of having a small team with Kitty Galaxies is that when we find something better than what we already have then we can swap it in/out with relative ease. This means a few things have changed since the first trailer…

And here is a very small sneak preview of some of the above: 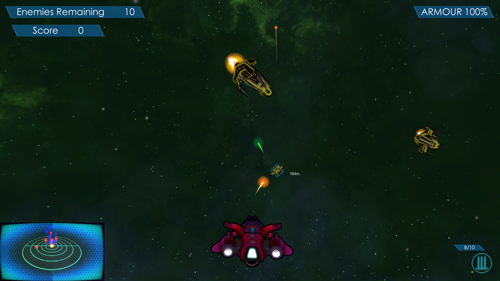 There is more to discuss, but we are holding off on that until the next update, which will be happening regularly now as development continues!

The title of the game sums of the plot and setting of the game, it cannot be any simpler than that. Why cats? Well, as should be obvious from the premise of the game that these are not your pet cat, and given that they pilot heavily armed spacecraft one should assume that they belong to a universe where cats have evolved beyond playing with yarn, or maybe they still play with yarn, who knows? ;) We wanted to develop the game as a space combat game, but without getting bogged down with having to treat the usual sci-fi tropes of humans Vs aliens, and do something different to most other things out there. "Most" being the key word in the previous sentence, because one of the main inspirations behind the game (as many have guessed) is Starfox, however unlike Starfox where the animals may as well be avatars for very human characters, the characters in this are a little less serious. It is also important to note that although Kitty Galaxies (generally) has a less serious plot than Starfox, it also has it's own set of lore, for those who like that kind of thing. In fact, over the space of a weekend we took the time to write what could only be termed to be the Kitty Galaxies universe bible, containing the technology lore and entire timeline, starting from many years before the plot of the game begins. But having said that, we are also developing Kitty Galaxies so that if you love plot then there is plenty of it, but if you just want to blast the hell out of the enemy kitties then you can skip that and get straight to the action.

Sayonara until next time,
Yanxen

We hear you, these are the main characters Tibbles, Sparkles, and Paul! 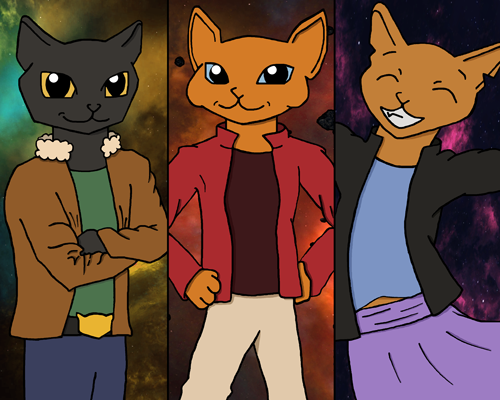 Are these the only playable characters? That would be telling, wouldn't it? ;)