King's Conflict - the unique trading card wargame - has just received yet another set of new cards. This time it's the Mage King who gets a makeover, with six new cards. He has four new elemental servants, a powerful command, and an epic structure that swing a game in his favour. As ever, the game is free to download and play.

The second ‘booster pack’ of new cards is now out – the Mage King now gets a bit of love, and though he does also lose a speciality card – Earthquake is now available for all kings to use - he does still have use of Earthquake if he wants. 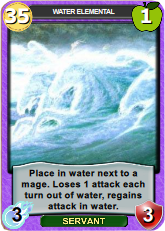 These are relatively expensive, but a 3/3 frost mage is not to be sniffed at. Unlike other water-based servants (Kraken and Mermen) they are able to leave water, and although they rapidly lose effectiveness on dry land they can easily be moved from one body of water to another. As ranged magic users, they can also destroy land-based servants at range while lurking in the water. 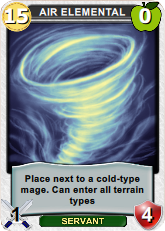 Cheap charge attack servants that are not affected by terrain – these are great for dashing around the map and taking out mines or other strategic assets. The need for a frost-mage to summon them is their main weakness, along with their low attack – but with a Talisman of Might they quickly become very very dangerous. 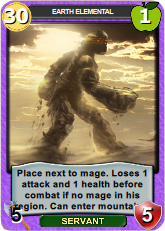 This powerful giant is a potent addition to your army – though he cannot be used for long without magic-based support. Use him to draw fire from your mages. 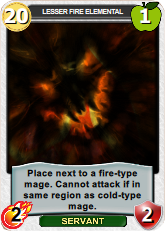 Much less dangerous and two-edged (and much cheaper) than his bigger brother – essentially he’s a mid-powered mage, though the no frost mages restriction provides your opponent with an obvious (if not always easy) way to neutralise him, and means you have to pay attention to deployment on the field. 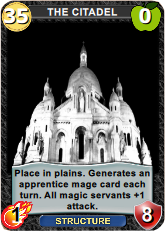 The Citadel is an epic structure that boosts the effectiveness of all your magic-using servants and provides you with a limitless supply of apprentice mages with which to overwhelm your opponent. It’s also a sure way to lock down a region, with a big dose of health and a magic attack. Notice that ALL servants get the +1 attack boost - this includes your enemy's mages, so think twice about placing a citadel when facing another Mage King! 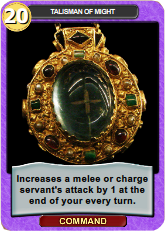 This is a way to create a real monster servant! This magical amulet slowly grows any melee or charge servant into something scary… charge servants make the best bearers, and air elementals are obvious candidates. Combined with priests and blessings you can quickly create something almost unstoppable. Note that these Talisman’s (Talismen?) do not stack – giving two to a servant has the same effect as giving one. The image, should anyone be interested, is the Talisman of Charlemagne.