New cards that can change the map during play are now available, changing the face of the game forever! Download and try the Big Juju, Small Juju, and the Juju Master...

A long-promised addition to King's Conflict is now nearly ready for release with v0.257 - cards that change the map. Regions are no longer static. This will change the game forever.

Jujus
The map-changing commands are called Jujus - a nod to the classic boardgame Kings and Things. They have many uses:
- Killing units (by changing the terrain to something they can't survive in), Jujus can be thought of as cheap but unreliable assassination cards (see below). In some cases though they will give you a guaranteed kill.
- Blocking choke points (turn the bridge in 'The Crossing' to river to force the enemy to find another way to cross - or block up the passes in 'Mountain Passes'
- Removing choke points (turn the whole river to plains if you like!)
- Expanding regions to increase income (by turning forests to plains, for instance, you can create huge regions on some maps)
- Altering regions to remove enemy income or food (merge two regions so you have control of them, or so their food supply drops)
- Trapping units (especially kings - convert large expanses to water and the enemy king may not be able to go anywhere!)
There's probably more you can do too - experimentation is encouraged!

The new cards:
First we have the Juju Master 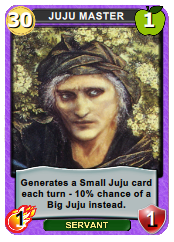 The master doesn't do any map-changing work himself, but every turn he draws you a "Small Juju" card (which does). If you are lucky, he will be really on his game and have a "Big Juju" for you! He's also a (weak) fire mage, so not completely useless in combat.

Then there are the two Juju commands themselves...

Small Juju (common card - you can have up to three in your deck, or let the Juju Master generate them for you instead) 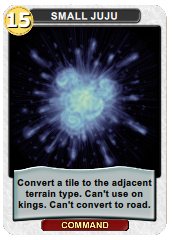 If there is more than one type of terrain adjacent - well you'll have to figure out the rules used (it's not random - some terrain types are always picked over others).

If, after a juju, a unit finds itself in terrain it can't be placed in (e.g. a Firemage in forest, most servants in water or mountains), then it either dies (50% chance) or tries to move to an adjacent tile if it can (50% chance). If it can't move for any reason then it dies anyway. This is why you aren't allowed to Juju kings! 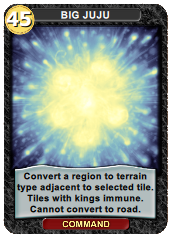 A "Big Juju" changes the terrain type of an entire region. It works in the same way as the Small Juju - select a tile with adjacent terrain of a different type to choose what you want to change the region to. But this time the whole region gets Jujued.

Used at the right time and in the right way, this can wipe out an army... or trap a king. Fear the Big Juju!