The "Grower" cards have arrived - epic servants that build slowly over time into monstrous assets. One per king...

Each King has just received one new card – a “grower” that can increase in power over time. They are all very different – read on! 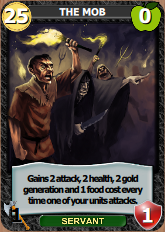 The Mob is hard to use well – it can grow very quickly into a frighteningly powerful unit, and unlike many other growers it doesn’t ever decrease in power. Beware the food consumption though – this it can quickly grow out of control and starve your entire army to death. Use with great care! 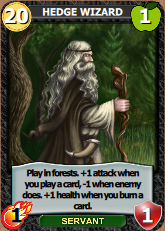 This grower is relatively cheaper than that of the other kings, as he’s a bit more limited. Firstly he has to be played in forests (though he can move out of them), which limits his use as a surprise placement. Secondly, while you can obviously grow his attack, the enemy can equally reduce it. Of course his attack is likely to be high on your attack phase, so use him with this in mind. Being able to raise his health is of course also useful. Note that his attack can’t be reduced below one. 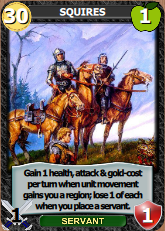 Squires may be the most powerful of the growers, though they are also the most expensive. With careful movement you can grow them by 2-3 points each turn, unless you are placing a lot of servants. Watch the cost though – they can turn into cash-eaters if you build them up and can bankrupt you if you aren’t able to get them into the action.

Quickfire Archers (King of the Hunt) 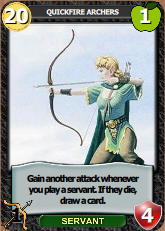 Less powerful than many, but cheaper – the number of attacks rather than the attack value is what grows here. The free card when they die is very helpful though, and combined with units that increase their attack value (stag for instance) they can be very effective indeed. 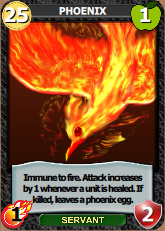 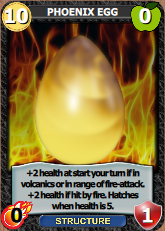 These are perhaps the most complicated growers. The BK can put either (or both) in his hand. The egg is incubated by fire – the easiest way is place a fire-mage of your own near it, but be careful not to place Priests of Flame in the same region, as their cleansing power will stop the egg growing. Once hatched (or when placed directly) the phoenix is reasonably effective – it’s immunity to fire is great when tackling enemy mages (note that it will still draw their attacks), and though it won’t grow as quickly as something like Squires, heals are common enough to make it an effective threat. It’s low health is a problem though. Note that although it DOES spawn an egg when it dies, you may have to work hard to keep that egg alive, as whatever killed the phoenix in the first place is likely to still be around! 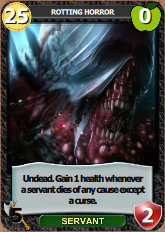 Relatively straightforward – a simple but effective (and fairly cheap) melee unit that increases in power as deaths accumulate. Place him towards the back of your army – by the time he reaches the front he ought to be really packing a punch!