King's Conflict - the unique trading card wargame - has just received yet another set of new cards. This time it's the Rich King's turn - he gets six new cards to play with, plus some tweaks to existing cards that should make agent-play a much more enticing prospect. As ever, the game is free to download and play.

Following boosts to the card-sets for the Warrior and Mage Kings, it's now the Rich King's turn for some new cards - he's also had a bit of reworking of his existing cards. The RK's card-set will always be smaller than that of the other kings, as he relies on wealth more than unique abilities to overcome his opponents, but nonetheless he also receives six new toys – two servants and four commands.

Before we get to them though, a few changes have been made to his existing cards which will affect Rich King gameplay quite significantly:
- Bribery – this no longer affects servants in the same region as the opposing King, giving them a (limited) means of protecting themselves against it.
- Agents now cost 20 rather than 25 gold. The agent commands have also been improved. Assassin works as it always did, but now costs 20 rather than 25 gold. Spy no longer returns the agent to your hand after use, and if the agent is in the same region as the opposing king you get two cards from their pile rather than one. You now play Spy on your agent, rather than anywhere on the map.
- The Tax Collector now generates 5 gold per adjacent structure, rather than 4
- In addition, Mercenaries are now cheaper. The RK is not the only king who can use these of course, but they normally suit his style of play best.

These changes make agents and mercenaries a better option for a RK, limit the power of Bribery a bit in the early game particularly, and should hopefully provide more ways to play the RK well. And then, of course, are the new cards: 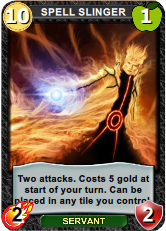 The Spell Slinger is a mage-mercenary – it works in the same way as all mercenaries, but is the most powerful of the lot (and the most expensive per turn, although still quite affordable). This is an epic card so you can only include one in your deck - make sure you do! 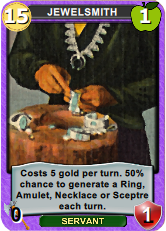 The Jewelsmith is a card-generator. Half the time he will generate you one of the four command cards below… however he costs 5 gold per turn in any case. Like a mercenary, if you don’t have enough gold to pay him, he will leave. Jewelsmiths provide you with a limitless (if slow) supply of ‘special tricks’ – if you have the money to support them, they will keep your strategic options broad!

The new commands are four different forms of enchanted jewelery – you can pick these as cards normally, or rely on Jewelsmiths to generate them. 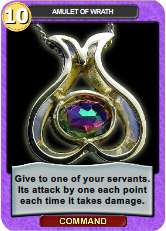 This powerful item makes servants stronger the more they are damaged. It can be useful on any servant with a lot of health, but is particularly effective on those that often suffer damage, such as Oakenhearts or Mountain Giants. Every time they lose health from being outside their preferred region their attack will increase – and even if they are later healed they retain this stronger attack. 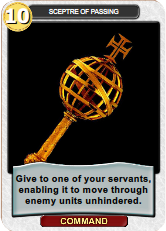 This allows servants to pass through enemy units as though they were not there – use it to march straight through blockaded choke-points, or reach weak enemy targets that were otherwise blocked off. 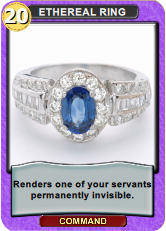 Permanent invisibility is a two-edged sword – invisible units can’t attack – but in many cases it’s VERY useful. Use it to protect servants that generate cards from enemy attacks (including commands, which can’t be used on invisible targets), to help you get thieves or agents into good positions, to control regions without fear of being evicted, or to place other servants where the enemy really doesn’t want them! Remember as well that invisible servants can pass through enemy units – they can go wherever they want. If you need to remove invisibility, you can use a Necklace of Cleansing... 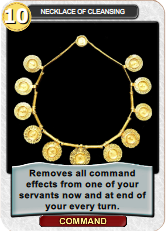 This necklace removes all command effects from the target, both instantly when you play it, and at the end of any subsequent turn of yours. Use it to remove any negative effects the enemy has played on you (like hobble), or to remove an ethereal ring when you no longer want to be invisible!