The final installment of the 'booster packs' for the older Kings Conflict kings is now out - the King of the Hunt gets the treatment this time, with four new dedicated servants and two new dedicated commands.

The King of the Hunt is the last of the original kings to get a ‘booster pack’ of cards following the release of the card-rich Blessed King. He receives 6 new cards, increasing his range of strategic options and possible play styles. 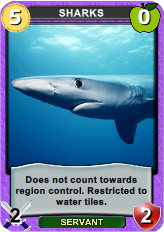 Sharks are a ‘beast’ card – they are cheap for their attack value and have no food cost either (they fend for themselves), but they cannot be used to control regions or gain income. As they are limited to water tiles they are restricted in their uses, but their fast charge speed and useful attack will make them an effective way of denying control of tiles adjacent to water to your enemy, as well as providing a way for you to place units on the far side of a river. 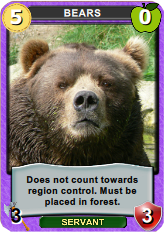 Bears are another ‘beast’ card – they provide a solid combat unit for very little money, and although the ‘place in forests’ limitation restricts their utility a little, they are still a very cheap way to add extra units to your army. 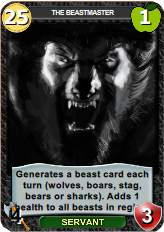 The Beastmaster is useful in combat, but his primary use is as a card-generator, providing you with a neverending supply of beast cards that can strengthen your army. The possibility of generating several Stags, with their stackable combat bonusses, is of particular use – given enough time you can generate a very powerful force indeed. Unlike most other card-generators the Beastmaster has a decent amount of health and provides a combat bonus to his beasts if you keep him near, so you will probably want him near the front lines despite his value. 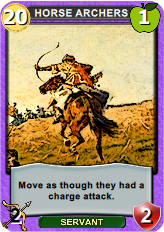 Horse Archers are the latest addition to the King of the Hunt’s already impressive arsenal of ranged servants. While neither their damage or health are high their mobility more than makes up for this – horse archers make superb harassment and surgical-strike units. 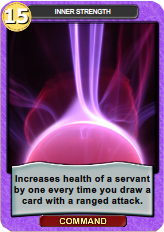 This command designates a servant to grow in health over time – with most kings the add-one every time you draw a ranged servant would not result in rapid growth, but the KotH is ranged-heavy, and also draws a ranged card every time he performs a burn. Inner strength is thus an effective way to turn a servant into a real powerhouse over time. 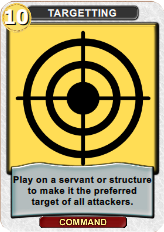 Targetting is a cheap and common tactical ability unique to this King – it’s used in the same way as the tactics cards generated by the tactician, but is probably more useful than any of them. Use it to make sure your ranged units take out the target you want them to, and aren’t distracted by tanks or sacrifical weak units.