With the release of the Blessed King, the more senior kings look a bit short on cards. I'll be dealing with this by releasing batches of new cards for each. First up - the Warrior King, who gets four new servants and two new commands. We now have siege weapons!

With the introduction of the Blessed King and his 20 dedicated cards, the card-sets of the other kings are looking a little meagre. Fear not - the next phase of work on the game will give each of the four senior kings a suite of extra cards to bring them up to (or close to) the 20-card mark, and broaden the strategic options open to them.

First up for this boost is the Warrior King, who gets 6 new cards - 4 servants and two commands. Well technically it's 7, as there's another command generated by a servant - but all will be revealed below! 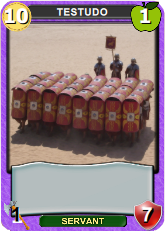 First and least interesting is Testudo (from the Roman Testudo legionary formation). This is a cheap 'blocking' unit - very little attack but a lot of health. Use it to hold chokepoints - or to help claim contested regions, where the huge pool of health will be an enormous help. 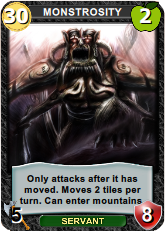 This guy is a bit more full on! The monstrosity is a powerful and relatively cheap melee unit - he's the same price as Oakenhearts and Mountain Giants and nearly as strong, but has no biome restrictions (plus he can enter mountains to clobber your opponent's mines). He does have two restrictions all of his own though - he moves rather slowly (2 tiles at a time is not quick), and he has to move if he wants to attack. He can still attack on your opponent's turn if he moved in yours, but if you don't move him then he stops fighting from your combat phase until you next decide to shift him about. This means, amongst other things, that he can't attack on the turn he is placed. 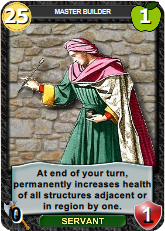 The master builder gives you a very effective way to make your structures STRONG! Mines in particular are rather vulnerable structures - use the master builder to turn them into towering fortresses. He can build up more than one structure per turn - as long as they are in his region or next to him. 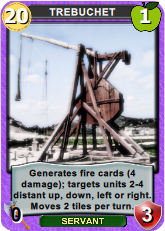 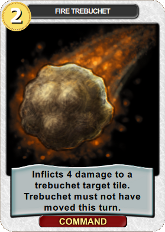 King's Conflict now features a seige weapon! The Trebuchet, like it's real-life counterpart, is quite complicated. It does't attack as such (it has a 0-rated melee attack, though you could boost this with weaponsmiths) - instead it generates one 'fire trebuchet' card per turn, and you use this card to fire the weapon. It has a range of 2-4 tiles, but can only fire straight up, down, left or right - so it's important to position it carefully. Finally, the trebuchet is slow - it only moves two tiles per turn - and you can't move it before firing (though you can fire then move on the same turn).

Trebuchets are difficult to use against servants, as they have to be lined-up on target squares and can't move to position themselves and then fire straight away. You will only hit careless servants with them, or servants forced through a chokepoint (e.g. on the Mountain Passes map). That doesn't mean they are useless against servants though - they are very effective area denial tools as enemies will have to avoid their targetted tiles. Structures are another matter though - they can't move out of the way, so you can safely demolish a castle from range, take out a Temple of Peace from another region (althouh Trebuchet firing is not combat damage and isn't affected by a Temple of Peace anyway), or destroy a mining operation from a protected position. real fun, put your Trebuchet on boats and you can fire it from a safe position in a lake! Finally, the Warrior King also gets two new commands. 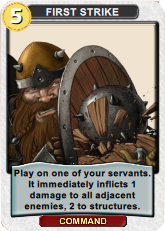 First strike is a cheap, common and rather useful command, that can be used in several ways. It can help swing a battle your way, nipping one point of an enemy unit that your opponent had calculated to be safe, or taking out a 1-health unit like a firemage before it can hit back. Notice that it can hit several targets, and it's especially effective against structures - it gives you a way to kill a farm or mine for instance with a weak unit before a unit guarding it can hit you back. 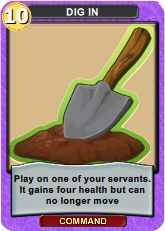 Another cheap command - this one is going to be very popular! It turns a servant into a static defender, but gives them a huge health boost. Use it to hold chokepoints, to give a unit an emergency health boost to win a battle, or (most strategically) use it to snipe-proof your card-generating units (priests, smiths, stonemason etc.). Note that dig-in's don't stack - if a unit is dug-in it can't be dug in again.