King’s conflict – the free fantasy trading card wargame – has been upgraded to version 0.200 with vastly improved artwork and user interface, and a painstakingly written walk-through tutorial.

After weeks of sleepless nights and hard work, King’s Conflict has now been heavily updated and upgraded. The game now has new and improved artwork, a walkthrough tutorial, and many improvements to the interface.

I'm very pleased to be able to announce that the King’s Conflict team has been joined by the talented young artist Nikita Kaur - Nickkaur.deviantart.com - who has produced new card artwork and, perhaps most importantly, a hugely improved set of map tiles. Nikita is busy churning out more high-quality artwork, which will make its way into future updates

King’s Conflict is still the same great game, but now it looks much better and is far easier to learn. It’s also still free, ready to download and play, and looking for alpha testers. Download and join the fun! 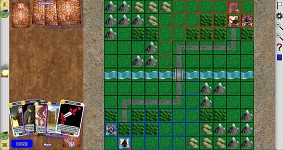 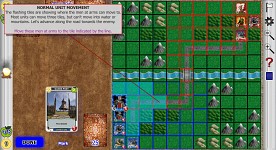 Some of the new cards from Nikita Kaur

- Tutorial now available from main menu - this carefully walks players through a game against the AI, explaining all key game concepts.

- Log window listing all game events now available, so if you missed something you can scroll back through it to see what happened.

- Units can now be moved by dragging. The old click-and-click movement system still works as well.

- Settings page is now closed using an X icon in the top-right, rather than by clicking on the background. It can still be closed by pressing escape

- Close icon in help system now at top right, not in button row at bottom

- Several in-game icons not directly related to gameplay moved to a second column on the right hand side - these are zoom in, zoom out, settings, and the chat icon in multiplayer. Only gold, food and fire icons remain on the left column.

- Fire icon moved to the centre of the left column

- New 'resign' and 'help' icons added to column on right. Resign does same as pressing escape. Help does the same as the help icon in the menus, bringing up the help system

- Mouseover tooltips added for most game-screen controls. These tooltips can be turned off in the settings page.

- Map now scrolls a little slower when 'flicked', and correctly scrolls to the edge. It no longer overshoots and bounces back

- The mouse wheel now zooms the map in and out. Currently it doesn't keep the view central - this is a known bug and will be fixed in future versions

- Info on units now appears when the mouse is hovered over the unit for 1.5 seconds. This previously required a right-click - right click still works as well

- Info card for units now appears in the play area on the left rather than on the map (to avoid obscuring attack indications). The play area is dimmed to emphasize the card.

- Info on an individual region is now available - hover the mouse over a tile for 1.5 seconds or right-click. This shows the region on the map in a yellow highlight, and provides text giving it's size, value (in gold and food), and ownership. If it is contested it tells you how much health each player has in the region, and it reminds you of the rules

- Food and Gold icons now work with a mouse-hover to show income and food source summaries. The enemy icons work for this as well as yours. Right click also works.

- Hover-info for units, regions, gold and food can be turned on and off in the settings screen. Right click (or long-press) always works for these.

- King's Touch raises health by two rather than one

- Audio narration for the walkthrough tutorial