My name is Max and today i want to show you the very first concept of my game called KINGDOMS. I hope that my ideas and vision of the game will be interesting for some of you and if you wish you can take part in development process. To understand what KINGDOMS actually is, let's talk about all its aspects.

So, the main idea is open fantasy world, with no habitants in the beginning, that develops through time: new people appear, new villages or cities are build. The world lives and this sandbox exists even if player does nothing. We can explore, build, have new friends and enemies, build alliances, set kingdoms borders, recruit and train NPCs, trade, hunt monsters etc. 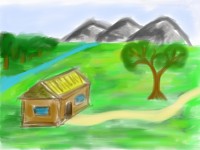 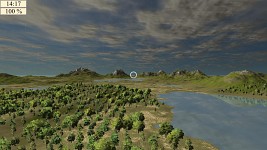 All NPC have their own unique characters, abilities and goals. For example we have an NPC, who wants to be a knight. Actually he (or she) is common peasant, but he does all, what he can, to become a nobleman: if he has high strength, he go to arena or army, to achieve a title. If he is good merchant, he can try to open a shop in town or tavern on the main road. Every NPC will have such aims in life, that will affect all their actions. The main goal is to make the world look real, even if player doesn't want to affect it.
As i already said, each NPC will have it's aim in life. I called it GLOBAL GOAL. Global goal affects the action, that NPC makes to reach it's global goal. For example, trades in the shop, or hunts animals, or steals from other people. The variations are endless. And there are also smaller daily goals, like eating, sleeping etc. A called it SUB-GOALS The final system looks like this: 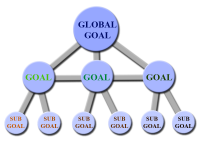 Of course, there are many factors, and characters abilities, that can affect NPCs actions. For example, when NPC has low COURAGE, he can't hunt wild animals in the wood or walk in the night alone. 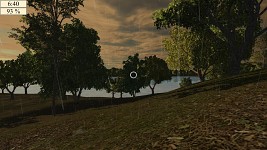 All quest are procedural. For example we have a village and terrible dragon near by (Of course, if the is a good fighter among villagers, he can kill the beast, without our help.) and people in that village can ask the player to kill it. But if dragon kills wolves or other creatures, that can hurt the village, people can ask NOT to kill it. This is only one example, but it can show, how many options there can be. Quest generates, based on all factors, that are connected with NPC. 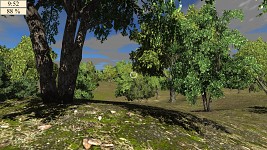 The player itself can be part of this world or can do nothing. Anyway the world will live. We can organize our own kingdom, build new capital on the high cliff, build our own knights order and keep peace in the whole kingdom. Or player can make it's own band and terrorize villages and its habitants. Also you can be on your own way, it's up to you.
Parameters tree will be closer to Gothic or Fallout like games - player can learn new abilities that can be useful for him. For example learn new attack or block, or learn something about some monster to hunt it more effectively. 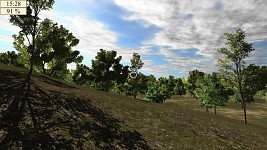 To feel and live in this world it have to be realistic. No save slots, game saves automatically. And death is death, with no resurrection. Also all combats will be as much realistic if possible. If you shot arrow into someone's eye, this poor person will definitely die. If there was a helm, this shot will not affect anyone and you'll have to use another tactic. 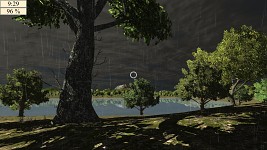 As you can see, it's very hard to make all this properly, with good optimization, visuals and no bugs. I have some good experience with Unity and C#, and i've already begun to write scripts and interface. The game is 3d with first-person view, so it's very important to have good art direction to fill world with details and objects. I'm not good in modelling and animation. (As you can see on the art at the top of this post.) So, If you're interested, if you're good modeller, animator or artist and want to be part of this game, please let me know. 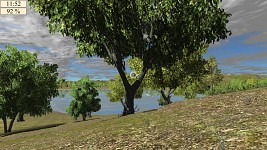 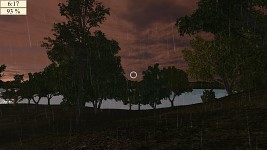 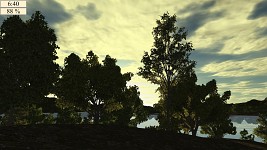 So that's it, hope you liked, don't forget to write some comment, i really want to know your opinion.
See you next time!

Great project! This is definitely a game i would love to play.Do you have a website or a twitter to keep us updated on the progress of Kingdoms?

Yes, we're planning to create Twitter and if everything goes well - also a website to keep all updates and fresh news in one place.

looks awesome i would definitely play it

awesome concept! cant wait to hear more about it :D

Awesome, keep working. I want to play this game soon, I can't wait. Kepp us updated on the progress of this game.

well following this game but there is a way that can lead the player to make his own noble family castle and kingdom then it expands with battle huge scale battles lab lab lab right :D

Yes, of course, if you wish you can do such things like building own castle or making own dynasty. NPC also can do that, by the way. Battles scale will be similar to Mount&Blade >> about 300 warriors on the battlefield.

Like what I see so far can't wait to hear more!

this seems like a great game I would like to build a kingdom while seeing the world progress by itself!