Posted by RocketJumpTechnology on Sep 28th, 2021

Welcome to the monthly King under the Mountain dev update! This month sees Alpha 7 released (as of yesterday) which is the single largest update of the game so far!

The main part of development for this alpha was extending the calculation and rendering of water flow into channels and pipes that can be dug by the player. You may have noticed that the river flows in a realistic direction in each tile. During map generation, this is calculated by flowing water from one end of the river to the other - really a rough approximation using a similar method to Dwarf Fortress - and keeping track of which direction water flows in an out of. Here's a very early video showing that in action:

The red lines are a vector used as the direction of flow in each tile, which is then averaged out to the vertices (corners of the tiles), and this is what's used in the water flow shader.

The main problem in extending this to channels dug by the player is I needed to combine all the rendering techniques the game currently uses - not just the flowing water shader, but also only showing this in part of the tile (the irrigation channel) and also the way that flooring overlaps with each other - i.e. rather than having straight edges between every tile, different floor types overlap onto their neighbours. Here's another extremely early video of that:

Also the irrigation channels make use of the way walls are rendered out of separate quadrants. So in the end I had to combine all the rendering techniques I'd come up with so far - the flowing water shader, the splitting of a tile into quadrants to make use of many different layouts from just 5 sprites, and the overlaps between floors also making use of these quadrants. It was messy and difficult, but we got there in the end! Here's a look at water flowing between irrigation channels in the game - this is slowed down a bit from what's ended up in the released version, and you should be able to spot the same method used as the original flowing water video:

So why would you want to dig all these channels for water to flow into? Well, they're certainly cheaper than laying pipes underground (which is a related new feature), but your settlers can't walk across the channels (though you can build a bridge over them) so for the most part, pipes would be much more effective. What they do provide is constant access to water for nearby plants, particularly your crops which is why you'll want to dig these channels and set up irrigation. Plants now require access to water to grow quickly, otherwise their growth is stunted if they don't have access to water for a while, and stopped completely if they can't receive any water for many days! "Access to water" for the most part will be covered by the fairly common rain in the game, though now the summer season is a bit drier overall. The goal is that players will be able to get by relying on the weather for watering crops (there's no watering cans or jobs here!) but they will want to turn to irrigation to optimise things (or at least avoid the chance of having a summer drought).

But how do you get water into these channels and pipes? This release sees the first animated furniture in King under the Mountain (courtesy of artist Rizal Zulkifli who produced most of the art assets in this release, and a lot before that too, all the way back to the original pre-alpha releases). You'll need to build a water pump connecting the river to a pipe system:

But to actually make use of the water pump, this release also introduces the concept of powered furniture. Not electricity, but good old mechanical power provided by a waterwheel or windmill.

There's a lot of small touches that get put into the game which I don't know if anyone will notice. One is that the waterwheel actually rotates in the correct direction, thanks to having the water flow information described at the start of this post! While the waterwheel has to be placed adjacent to the river, the windmill will work anywhere outside, however the windmill requires linen sails which I'll get to later.

Now there are power-producing and power-consuming pieces of furniture (the ore crusher now requires power or else it takes a very long time to use), they need joining together in some way. As this is mechanical power, this is performed through a series of gears and wooden shafts which are placed below the ground level:

Now that your dwarves are able to move water from the river through pipes and channels, that creates an option of no longer having to trek all the way to the river for the many times a settler needs some water for a job or just to drink. You can now build wells which are automatically filled by your pipe system, so you can build these deep into your settlement, connected to working pipes, and greatly reduce the amount of travelling for water needed! 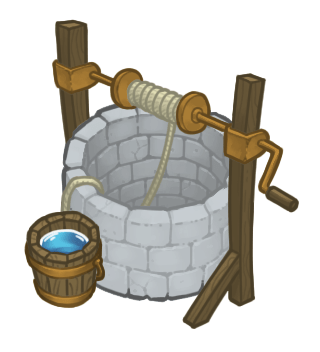 This release sees the first Kickstarter-backer-nominated crop added to the game - Hemp! While we're not adding any Tolkein-esque "pipe-weed" just yet, it's a possibility for the future. What hemp does do for you now - is introduce a new weaving crafting type where hemp is processed to hemp fibre through a process called retting (in King under the Mountain, this is mechanically the same as the mushroom log shock tank where the hemp bundles are submerged in water for about a day), and the hemp fibre can be woven into rope or linen. The well above clearly needs a rope to function, and as mentioned earlier, the windmill requires linen for its sails to function. Most importantly though, beds now need linen to be constructed as well as wood for the frame, making comfortable beds that little bit more expensive to craft. To balance this, there's now a "sleeping spot" which can be placed in bedrooms as a location for your settlers to sleep on the floor, so at least you can control where they sleep before you can furnish your settlement with a full complement of beds. Look out for other backer-nominated crops still to be added in the future!

Long-time players may remember the fishing profession that was in early versions of the game (which didn't do anything), or more recently you may have noticed that your dwarves produce fishing poles without making any use of them. Well that is no longer the case! The fishing profession is now fully implemented, so particularly unusual dwarves may be happy to go and stand next to the river, fishing pole in hand, to bring back fish for your settlement to eat. Mechanically this is an alternative to growing crops for food, without the setup of tilled earth or the requirement of seeds, but it is more labour intensive as the settler has to actually fish for a long period rather than leaving crops to grow. That said, fishing is probably an easier way of acquiring food, so there's also a limit on how many fish can be caught each year - which should be enough to support a population of up to 20 settlers from fishing alone. Currently the game includes Pike, Perch and (of course) Carp, with the artwork produced by Kaitlynn Peavler. 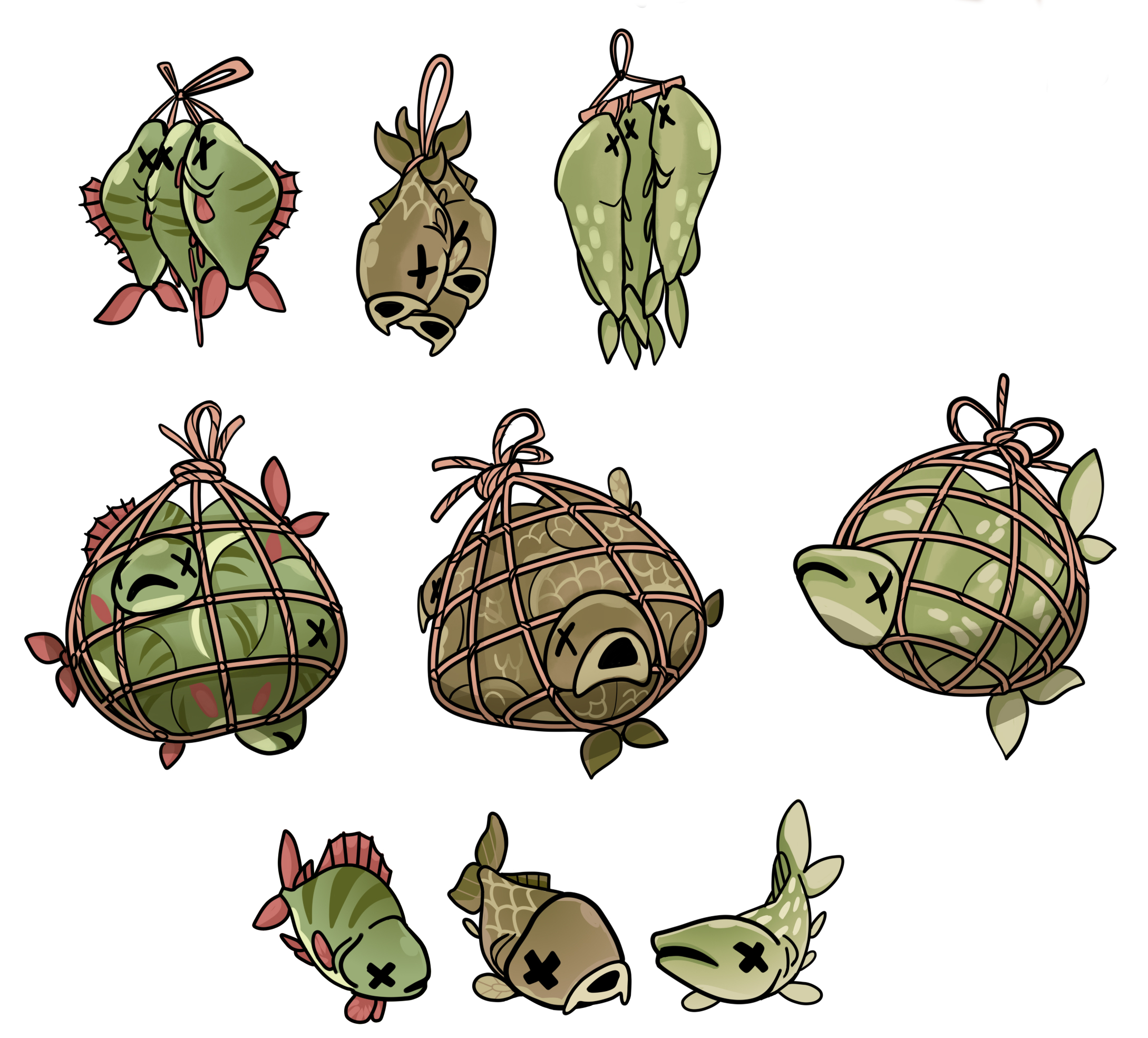 Right now the fish you catch only produce meat to be added to your food supplies, but it won't be long before bone is added as an important crafting resource too, with small bones from fish making up a large part of this.

The door assets saw a visual update this release (again thanks to Rizal Zulkifli) which was necessitated by the fact that the old door sprites only had "connecting" caps on walls for the rough stone wall type. The doors now align and blend in properly to any of the types of walls found in the game, as you can see by this before and after screenshot: 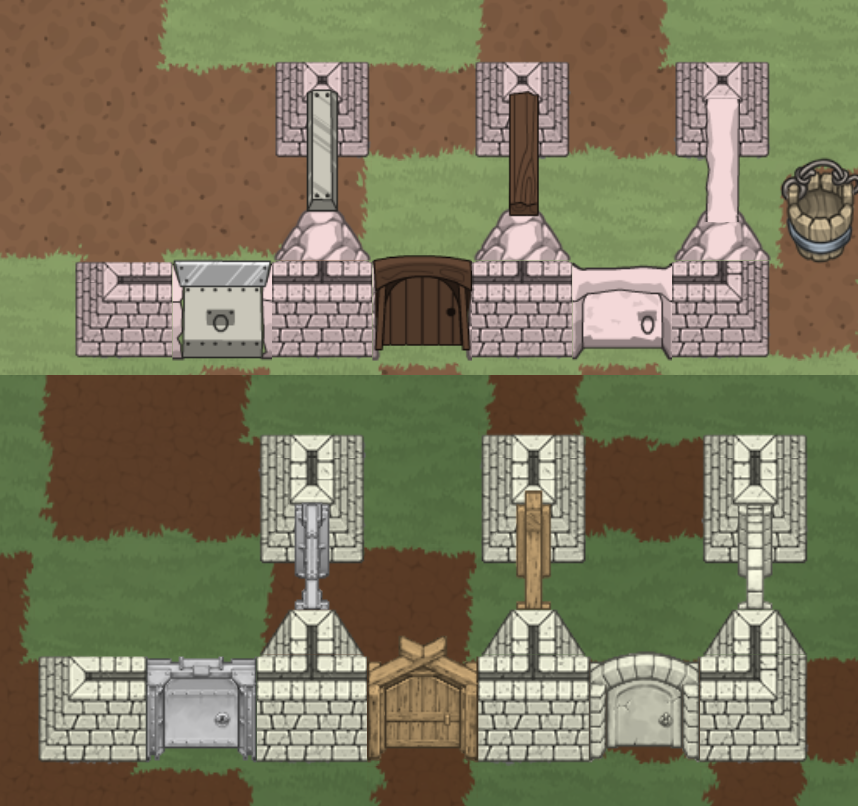 As usual, this major release came with a bunch of bugfixes and quality of life improvements - one of the standout QoL improvements being that when a stockpile's settings are altered, it now cancels any outstanding jobs to haul items to that stockpile which would not be valid with the updated settings. There's also a big startup-time performance improvement as I noticed all the sprites for the game were being loaded many times over on launch due, which has now been fixed, so I'm hoping players see a noticable improvement in the time the game to takes to initially load up (show the main menu) compared to before.

And that just about covers this month and Alpha 7! If you're reading this and you have yet to actually play King under the Mountain, good news - There's now a playable demo available (accessed via the Steam store page) as part of the upcoming Steam Next Fest! 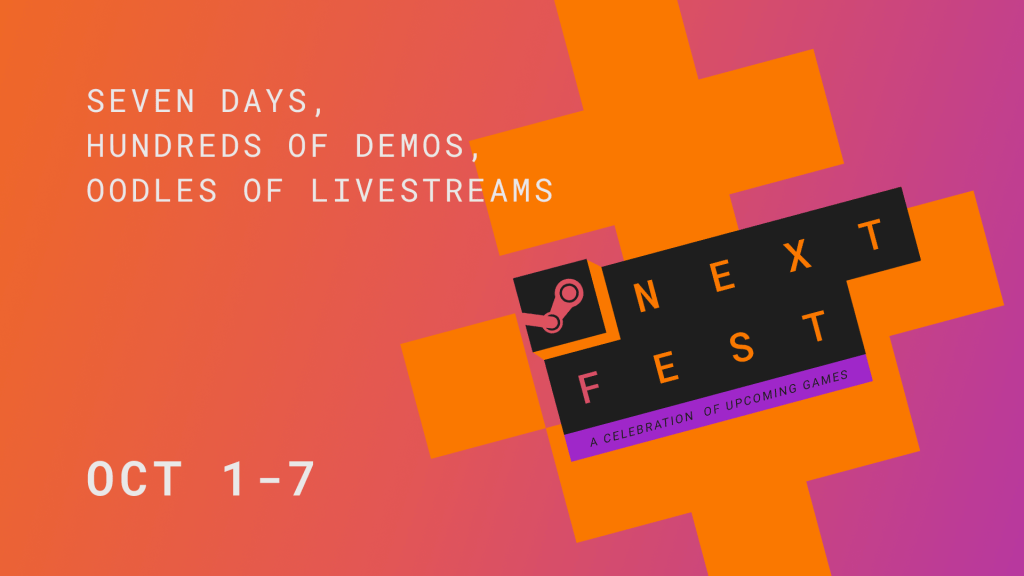 This is a time-limited demo (you can play the first year of the game without restriction) based on the Alpha 6 version (so it won't include any of the content mentioned in this post). The demo will only be available while the Next Fest is ongoing, so make use of it while you can!

That's it for this month, now we're going on to adding all kinds of animals to the game which I can't wait to share with you, as well as detailed injuries and health as a key component before combat is added shortly. As always, drop by the King under the Mountain discord server as the best way to get involved with the community and help improve development through player feedback (or just to ask for help).

Finally I want to pay it forward a little and throw a spotlight on another upcoming game featuring dwarves digging their way into the depths - Below the Stone currently on Kickstarter!

I've been following Below the Stone for a while and they've gone through exactly what I did with King under the Mountain - an initial Kickstarter that didn't meet its goal (it is ridiculously hard to do well on Kickstarter as an unknown indie compared to the golden age of around 2013 to 2015), so they kept working hard, improved things, learned lessons from the KS campaign and came back and they've nailed it. I'll leave the description to them:

Below The Stone is a procedurally generated spelunking roguelite with completely destructible grid-based levels resembling that of many loved titles such as Terraria, Enter The Gungeon, Nuclear Throne, and Dwarf Fortress. You play as an apprentice dwarf yearning to make your mark in the dwarven empire through the time honored labor of mining and exploration. On your adventure, you can complete jobs for your guild masters for a choice of rewards, and have the opportunity to collect precious metals for yourself to upgrade your armor, tools, and weapons. As you dig deeper, you encounter motherloads of riches and surpass all of your peers expectations. But be careful, there are many monsters and hazards that await around every corner, looking to monch your beard off. And if you die, there is no running back for your items.

If that sounds like your kind of thing (and I'm assuming there's at least some amount of Dwarf-appreciation from people reading this) then there's just a few days left on the Kickstarter campaign and they've already blown past the funding target in the first few days, so please help them reach those exciting stretch goals!