Monthly dev update for King under the Mountain - a simulation-based strategy game inspired by Dwarf Fortress, The Settlers and Prison Architect. Back after a hiatus!

Posted by RocketJumpTechnology on Oct 25th, 2020

Hello and welcome to the resumed King under the Mountain dev update! I'm happy to announce that the remaining pieces of work for the brewing beer update were completed, so this has formed the initial Alpha 4 release.

In a slightly different format I thought I'd explain the process (for the player's point of view) to making use of this new and perhaps crucial feature.

First of all, rather than being somewhat random, each new settlement now starts with a fixed number of a fixed group of seeds for planting, as shown here: 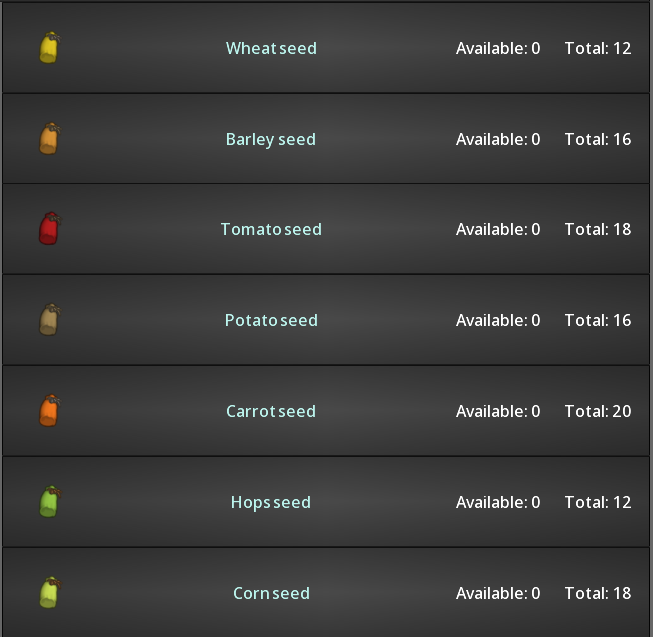 In the not too distant future, starting resources will be customisable by the player upon starting a new settlement (the "embark" screen!), but while this feature is not yet implemented, this is the stopgap solution. Expect some seeds like wheat to be more valuable than others, as wheat tends to go a bit further to feeding your population due to the bread baking production chain (at the cost of more time, labour and furniture).

A new settlement will probably want to spend it's first spring focused on planting all of these seeds so they can be harvested in autumn to provide food for the settlement past the initial supply of rations, and now also produce beer! With most features in King under the Mountain, I put a fair amount of research into understanding how the production chains in question work in real life, using this as the basis to have a grounding in reality, before removing or simplifying some parts so the game isn't too grindy with small details. Take the opening line of the wikipedia page on beer -

Beer is one of the oldest and most widely consumed alcoholic drinks in the world, and the third most popular drink overall after water and tea. Beer is brewed from cereal grains—most commonly from malted barley, though wheat, maize (corn), and rice are also used. During the brewing process, fermentation of the starch sugars in the wort produces ethanol and carbonation in the resulting beer. Most modern beer is brewed with hops, which add bitterness and other flavours and act as a natural preservative and stabilizing agent.

As malted barley is the most common ingredient, right now that is the only way to produce beer in the game, though I intend to add other methods and other alcoholic beverages over time (or perhaps the modding community will step in before I get there!) So in reality beer is produced from water, barley (or another cereal grain), hops for flavouring, and yeast for fermenting. I decided not to model the yeast aspect of fermentation explicitly, instead you can assume your brewer dwarves keep a small supply with them to be added where needed. That leaves water, barley and hops. Water is clearly an already very important part of gameplay (there are not many quicker ways to killing off a settlement than removing its water supply) although moving it around currently leaves a bit to be desired (look forward to piping and aqueducts in the future!) Long time players may remember that both hops and barley were already implemented along with the current batch of crops, though they were removed for a while as there was no use for them in game. Clearly that has changed so you'll now want to start farming barley and hops to produce beer! 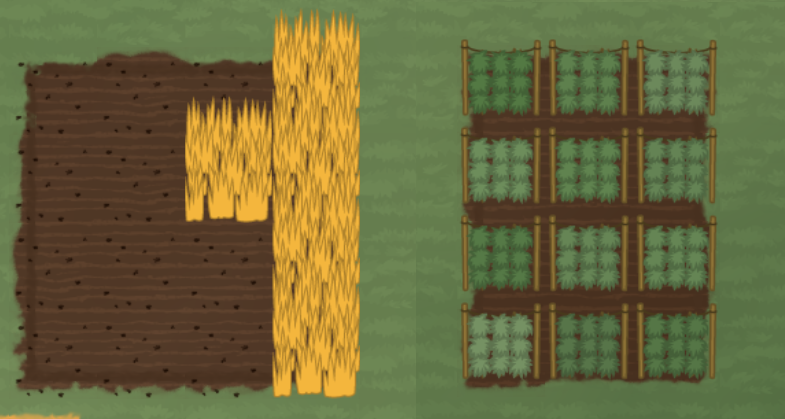 Once your settlement's most pressing needs are seen to, you can now start to think about the construction of your first brewery. The beer production chain makes use of a new item - a metal barrel called a "tank". One of the many additions to the game's codebase for this feature was to allow for liquids as both inputs and outputs in a crafting process, which beer production is a big part of. To support construction of your brewery you'll need a decent metal production chain fuelled by either charcoal from lumber or coke from coal.

This allows for the production of metal plates and barrel hoops, both of which are the input materials for the new metal tank item. Setting up a brewery is a much more resource-intensive venture than anything else in the game currently!

The first step in beer production from the raw materials is to turn the barley from your farm into malt, using a malting station at the new brewery zone. There's also a new profession required (the brewer) and your settlement is not guaranteed to start with any active brewers, so look out for this as a potential problem with your first brewery! 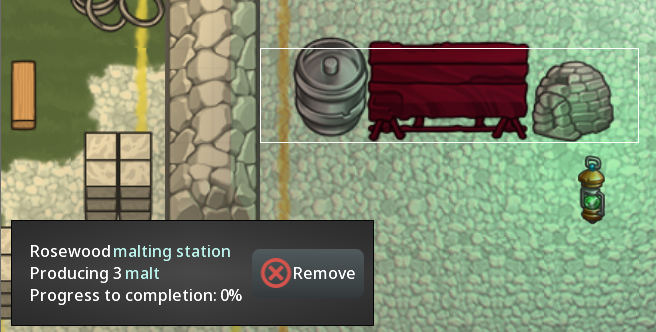 The malting station, with included water tank and mini-kiln, takes your freshly harvested barley and turns it into sacks of malt. In reality, there are several steps to producing malt, but I felt it worth simplifying those steps to a single piece of furniture which combines all of them "behind the scenes" to a single crafting process in King under the Mountain. The player does not get away with it too easily however, as after producing the malt it also needs milling (producing "milled malt") which currently takes place at the hand-operated gristmill located in a kitchen. I thought it might be interesting to have the production process need to change locations between a brewery and another zone, but I may end up adding the gristmill to the brewery. In either case, I'm also planning to add easier, more traditional milling methods (a literal windmill or water-wheel powered mill) in the future.

Once you have your milled malt, it's on to the mash turn where it is combined with water to produce wort. 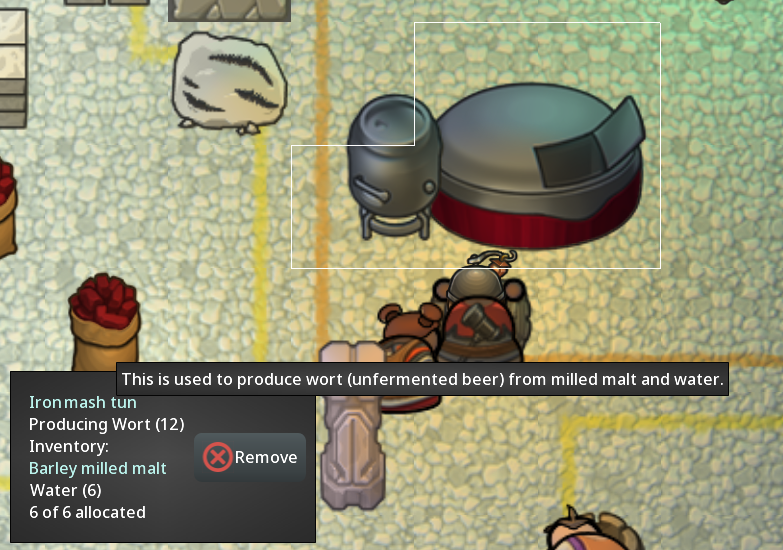 As part of overhauling the liquid-management system in the game, water can now be transferred in other containers than just buckets. Fortunately this means the 6 units of water required by this crafting recipe can be delivered in one go by a dwarf hauling a barrel to the river, filling it, and dumping the whole barrelful in one go! As an aside, the game also tracks liquids in containers better than before, so soup left over in a discarded cauldron can now be used correctly rather than being thrown away as it would in the past.

Flavouring (i.e. the hops) are added in a brew kettle (also known as a "copper", although it does not need to be made out of copper *yet*) to produce hopped wort, which is the final step before fermentation. 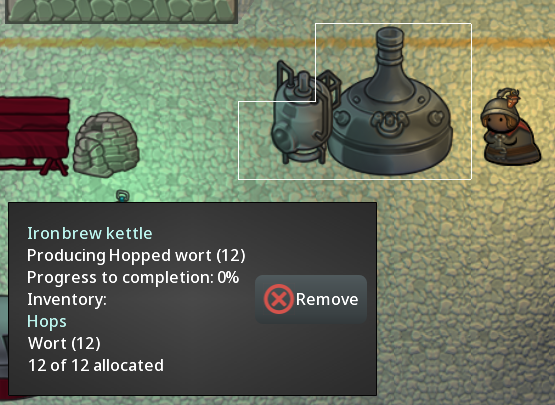 Finally, the hopped wort is moved to a fermentation tank for, no surprise, fermentation, which produces the final beer. Fortunately for your now metal-deprived dwarves, these can be constructed either automatically by placing a metal liquid tank, or crafted by a stonemason out of stone blocks. 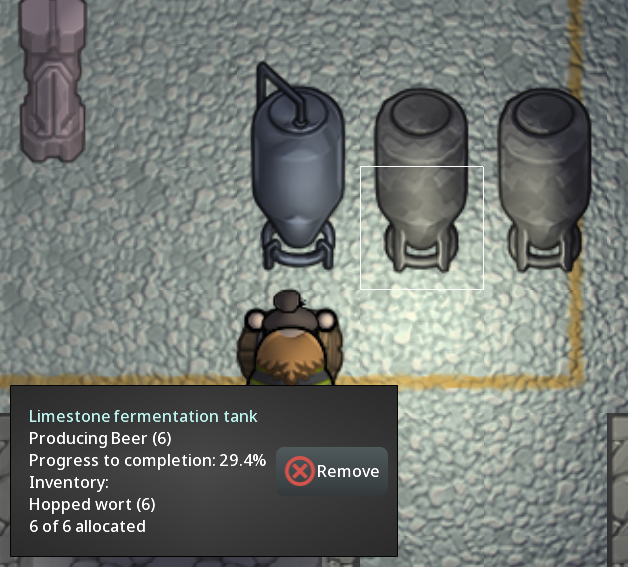 Once the beer has had enough time to ferment, it can be decanted back into a barrel, ready for consumption as glorious dwarven beer! All that's left is to build the most important piece of furniture of all - the beer tapper - in (of course) the feasting hall for your dwarves to enjoy! 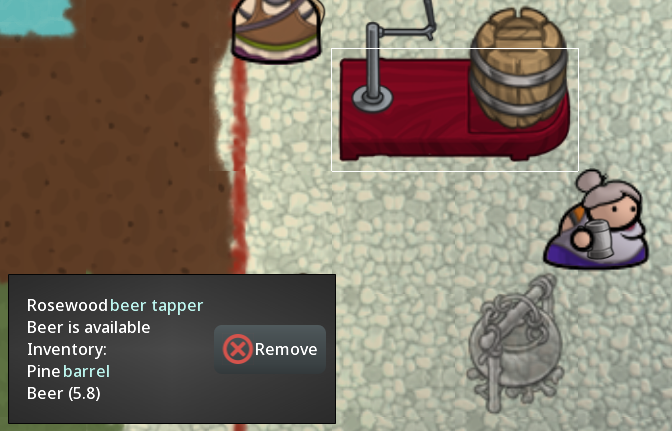 And that's the beer production chain! It almost goes without saying that dwarves much prefer drinking deliciously brewed beer rather than water from a barrel, and will be much happier in your settlement after a good drink. Beware though, as if a dwarf drinks nothing but alcoholic beverages for several days in a row, they will become dependent upon it to get through the working day. While this applies, they'll still have the same happiness bonus from drinking beer as before, but if it runs out, expect a disastrous hit to happiness while they go through the withdrawl effects of going sober!

The management of tracking if a dwarf is drunk and/or dependent on alcohol is using a "status effect" system which I don't think I've detailed in a dev update yet. It's the same system that makes the progression of hungry > starving > dead (and the counterpart for being thirsty) work in the game. Perhaps this will be worth detailing in a future dev update?

Constructing a functioning brewery requires a surprising amount of metal ores, ingots and fuel to get going, and with this update you may find more than ever that you want your dwarves to produce certain quantities of items in a certain order, or more likely not produce other items that they currently are doing. This really necessitates the ability for the player to control what is crafted, AKA production management, so that's the next feature which is being worked on for Alpha 4! In a similar vein, being able to prioritise which jobs you want doing urgently rounds off the roadmap for Alpha 4 and probably what is most necessary at this stage.

Finally, a note of thanks to community member gammalget / falkowich who offered some help in diagnosing and fixing the issue that's been plaguing the Linux version of the game since the Java update. I'm happy to say this has now been resolved so Linux players should be able to use the executable provided rather than need their own installation of Java to run the game.

If you find any issues with this or any version of King under the Mountain, the best option is to drop a message in the official King under the Mountain Discord server in a relevant-looking channel. I'm also on hand to answer questions directly there, if you're interested. On that note, thanks as always for sticking with development of the game (or at least this update) and see you next month!