Posted by RocketJumpTechnology on Dec 24th, 2020

Another month, another year even, and so it's another dev update for King under the Mountain! There was another fantastic burst of progress this month culminating in the first release of Alpha 5, covering half of the items from the Alpha 5 roadmap already - so I'll jump straight in to the new developments!

First of all there is now a (very bare-bones) embark screen (i.e. "Start new game" screen). This allows you to set a name for your settlement (or let the game randomly generate one) as well as set the seed - the number used to initialise the random generation - before starting the game proper. You can enter text into the map seed field if you like, though the game will turn it into a long number as shown. This means if you discover a map you particularly like, you can use the same seed again in the future to recreate it, or better yet, share map seeds with other players. In the future this screen will contain a lot of options to customise your starting settlers, items, even the map itself before starting a new game, but it's nice to have even this in the meantime. 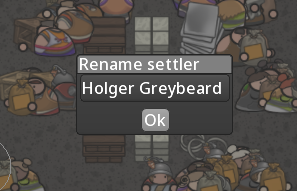 Speaking of customising settlers, you can now rename them in-game. Perhaps not too exciting by itself but it leads on to... 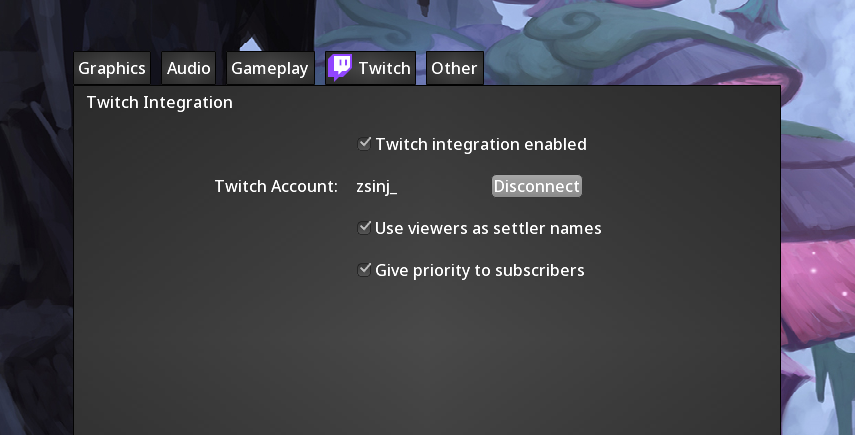 Twitch integration! While playing the game on Twitch, you can now connect your account using the game's options menu, and this will reveal the options shown above to have settlers in-game automatically have names based on current Twitch viewers, with an extra option to prioritise Twitch subscribers before other viewers. While this feature has been tested and works well as far as I can tell, I don't believe anyone has tried this feature out properly on a Twitch stream yet, so please let me know if you're going to give it a try!

Thanks to one of the several very talented artists I'm working with, there are now new visual assets for the way floors overlap onto each other. On the left in the picture above is my old programmer art wavy-edge type of flooring overlaps, and on the right something looking much much better for different types of floors (see if you can spot how the dirt onto stone looks different, it's subtle!). Also the grass flooring itself has had an overhaul to look better too. There's a lot of artwork in progress and also already completed for features to be added in the not too distant future, but I'd prefer to keep the reveal of those for when the features are actually implemented properly.

So you can name your settlement now, but why does that matter? To help you identify different saved games! Above is the load game screen that's just been added to the main menu (though I'm sure most of the time players will just hit "Continue game" to continue their current save). This means you're not limited to a single saved game at a time anymore! Long overdue like most of the features in the pre-Steam Alpha roadmap and I'm very happy to see it added. The save files themselves have been overhauled so that they use compression, so in previous versions a save file would be 30 to 50 megabytes, now one is generally around 2 and a half megabytes! 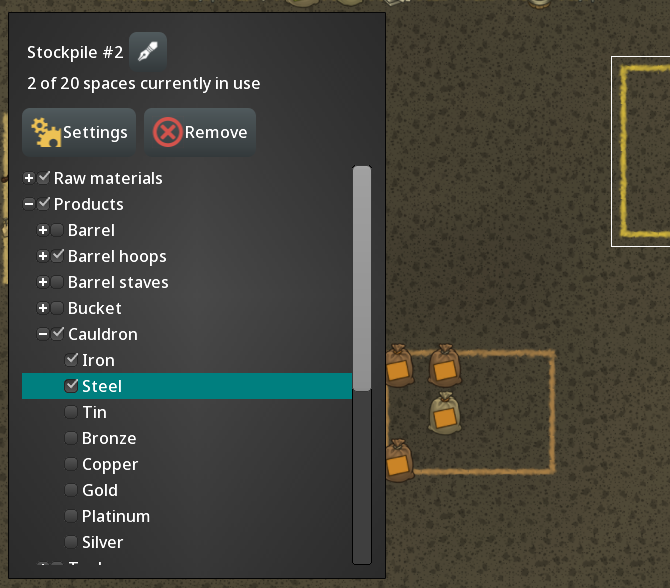 Speaking of long-overdue Alpha features, stockpiles have been reworked (they are not quite so fixed in what they can store anymore) and stockpile management/filtering has been added. Click on a stockpile and click on the Settings button to get the view above, this lets you customise which item groups a stockpile stores, down to the level of the items under those, and you can even select the materials for those items if you wish. Since the above screenshot was taken, a priority control has also been added to stockpile management, so you can set which stockpiles should be filled first or last, or somewhere in between.

Finally there's a few small improvements to the settler management screen following player feedback. There's a display of number of beds at the top of the screen, clicking on (i.e. filtering to) a profession keeps the other settlers in view but greyed out, and there's some sort options at the top to view the settlers by name or decreasing unhappiness (which was the old default).

Currently I'm working on a particle effect system - the small, short-lived visual effects you see in most games. This will (hopefully) be things like sparks flying off a blacksmith's forge, pieces of stone chipping away when mining or crafting, water droplets splashing when filling a barrel, little visual touches like that which really start to bring the game together. As always it'll be fully extendable / easily moddable, but it is quite a chunky feature which will take some time, so I thought it best to release an initial version of Alpha 5 before getting stuck into it - which is all of the other new additions you see above! Once that is done (and it also includes showing the progress of a job being worked on) it's on to constructing flooring and roofing - having an area be outside or "inside" will start to become important. Especially a little later when weather is introduced which will really shake up the current gameplay! The goal is for there to be a slight punishment to things being left outside which I think should change the dynamics of building a settlement quite a bit.

Until then though, as ever, the best way to get involved is joining the King under the Mountain Discord where I'm usually on hand and always very happy to hear any feedback or issues players are experiencing. See you in 2021!