This is first update for my new project, Killing Horizon, the last week was a mixed bag of progress on nearly every aspect of the project. Primarily improving the AI ( which has been totally re-written for this game ), I also cleaned up a lot of the animations for particular weapons/items by adding unique versions for most of the weapons/items. Still missing a few unqiue reload animations for a few of the weapons... and much more!

This is first update for my new project, Killing Horizon Radioactivesoftware.com ... the last week was a mixed bag of progress on nearly every aspect of the project. Primarily improving the AI ( which has been totally re-written for this game ), I also cleaned up a lot of the animations for particular weapons/items by adding unique versions for most of the weapons/items. Still missing a few unique reload animations for a few of the weapons. Once I get those animations in-game, I'll be animation-complete for the prototype's 7 weapons. I also made progress on 100s of other areas of the project.

New Animations
Below are a few images of the some of the new animations I added tonight. I transitioned from a sort of "squatting" animation into a more realistic "take a knee" kind of animation.

Artificial Intelligence
I've also been making a lot of progress on the AI, and the way the computer controlled characters handle attacking eachother. For instance one situation I've noticed on my little test map is that there were deadlocks on the center of the bridge, for instance if a AI bot can see an enemy through the fence - but their bullets are colliding with a fence, the bots would just empty their mags at eachother :-p

I create a threshold value, that basically says "if the bot has made X attempts using weapon Y to hit their target, and has not been successful in Z tries ... give up on this position/target and continue with your previous task/navigation target for W seconds". Even making such a simple change to the way the bots act has created great results.

The pathfinding is nearly perfect, but sometimes they do get stuck...I need to add a similar heuristic that says "ok I've been trying to get to this navigation node for X seconds and I'm not there, I need a new path, etc." ... that will improve the only real remaining issue with the AI in these enclosed arenas. As you can probably tell from some screenshots of the game, it supports MASSIVE terrains and worlds. Getting that level of AI throughout will not be easy, but I've got a lot of ideas, regarding "islands" of detail around command points, and other areas of interest.

I'm a visual kinda guy, here are a few images of the AI Bot debug display... 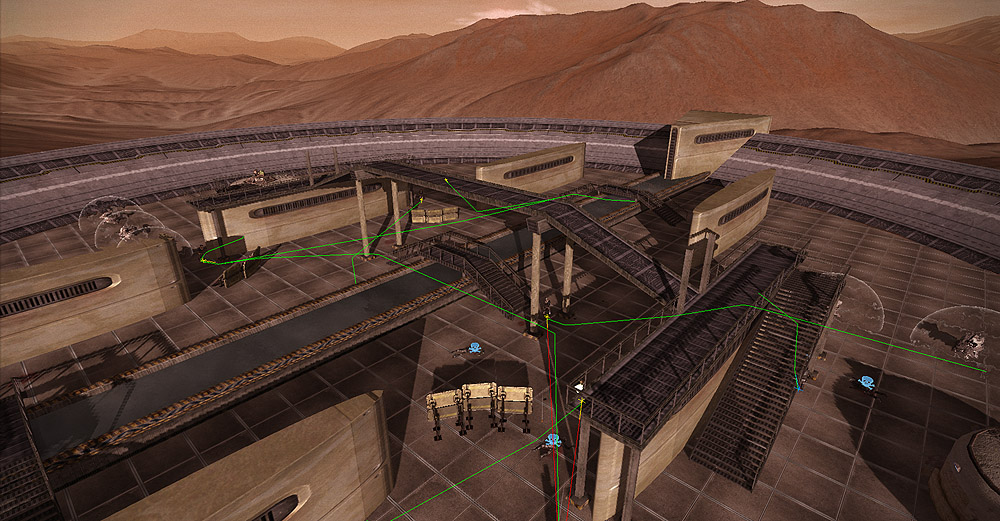 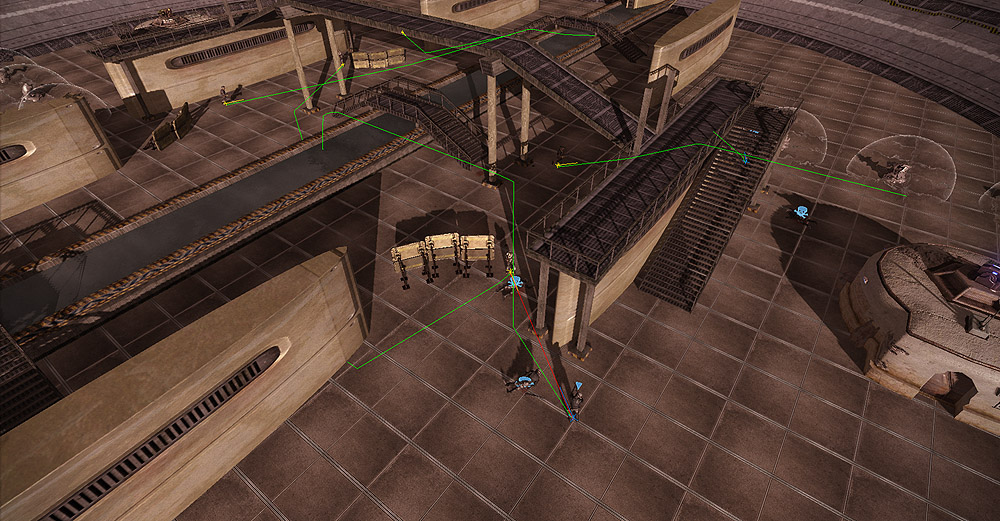 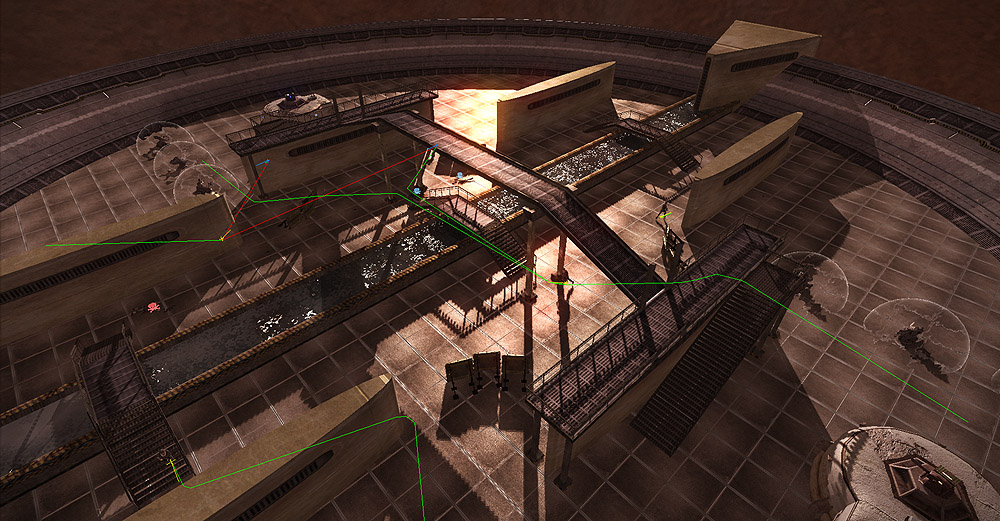 Prototype Maps
I've been thinking how I can quickly iterate through level design without spending a ton of time designing art assets for the levels I create. My new world editor is great for placing entities and objects on the already placed level geometry, but I wanted a way to just throw together some geometry and bake some ambient occlusion into it - then throw it into the game. I'll probably add a grid or some kind of Tron looking effect into the shader. I'll also have to have big flashing letters saying this is just a prototype level and not final game graphics lol... Texturing is what takes me the most time when designing a level, so if I can just mock-up a bunch of levels, include them in the latest version of the game and get some feedback from players on which ones are their favorites - that'd be great for me.

Work in progress Concept Art
This is still being worked on, I think the sky should be more like the martian background I have in the game. This image is also stylized more-so than the game. This has a darker look/feel to it. I really love the draining and water going down into the "Deadpool" ( yes that's the name of this arena :-p ) ... I'll post an updated version of this piece of art once it's finished. 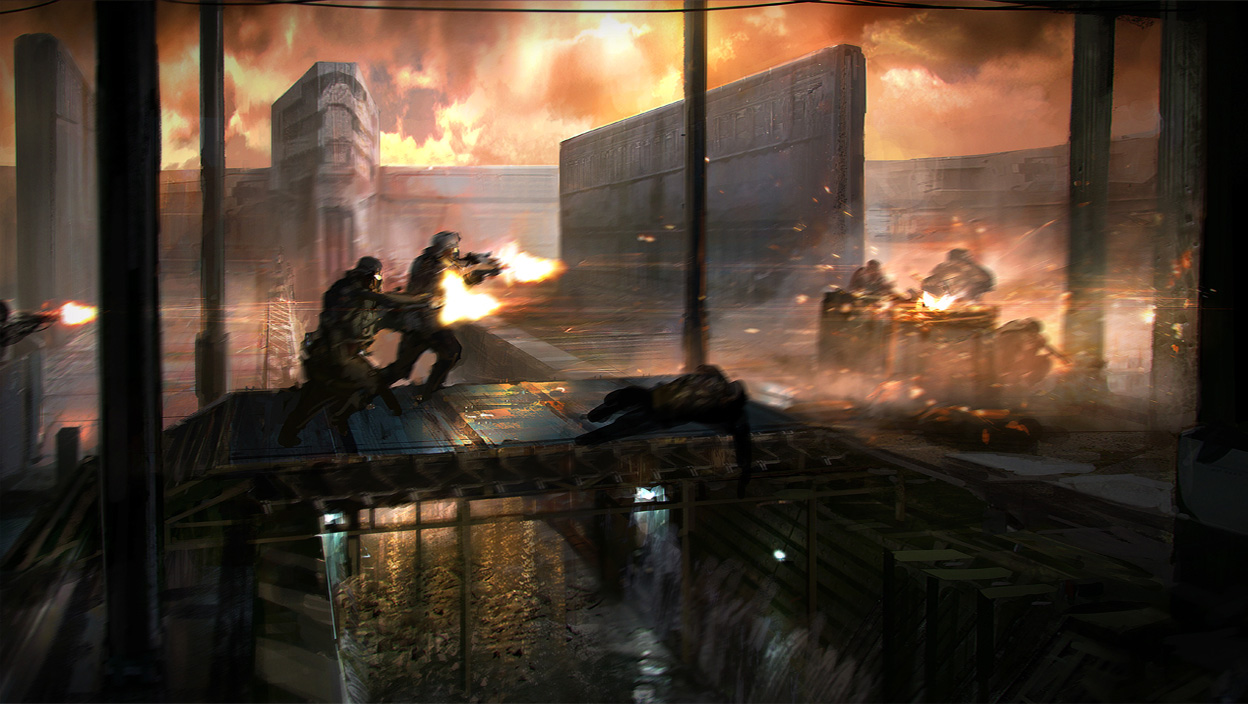 That's all for now! I'll have another update very soon!