The past two months have seen a lot of the programming groundwork being laid for menus, mapping, and systems so everything works cohesively across the game. And while there's still lots to go, we've got some great screenshots to show off of the menus, UI, and some fun class skills information for you. So without further ado, here we go!

The past two months have seen a lot of the programming groundwork being laid for menus, mapping, and systems so everything works cohesively across the game. And while there's still lots to go, we've got some great screenshots to show off of the menus, UI, and some fun class skills information for you. So without further ado, here we go!

Becca and Patrick have been hard at work getting art assets and programming logic all linked up for the various systems. While a lot of these will still see considerable changes over development as art assets are completed, we've got a sneak peak at the various menus in-game.

(Note: these are still in alpha, so fonts, layouts, etc are all subject to change - and likely to change :D) 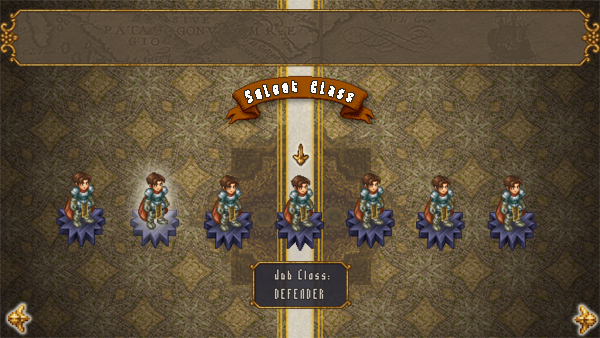 Class Selection Menu: With the class selection screen, you'll be able to select from the 4 core classes, and each of their 2 advanced classes once you reach a certain skill point threshold in their respective core class. 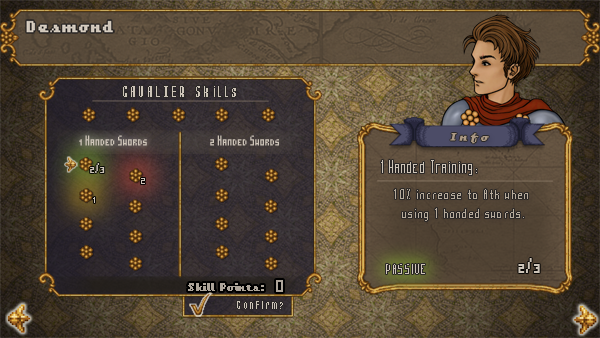 Skill Selection Menu: Here you'll be able to invest in various skills based on your core class, with each skill having several levels of development that grant bonuses like increased Attack Power, the ability to equip Heavy Armor, and inflict Status Effects with your attacks. 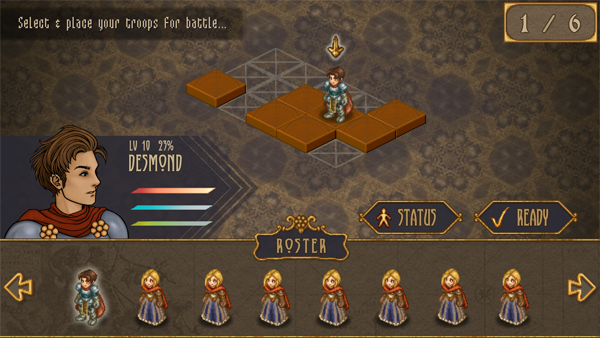 Unit Placement Menu: Once ready to enter battle, you'll come to this little screen where you can select from your full troop formation for placement in battle.

Formation Selection Menu: Here is where you can select from your troop roster and control everything from equipment, skills, class, etc. We're planning on having a troop limit of around 30 units currently.

As finishing touches on the mapping system are implemented, we'll begin focuses on cutscene development and the battle system - which means skill implementation is just around the corner! In light of this, Taylor and Becca have been planning unique skills for all the core classes. Each class currently has two skill trees including support, attack, passive, movement, and reaction skills. For a preview of total skills currently pre-planned for each class, see the graphic below.

Our goal is to have enough skills and skill points amongst them to make it impossible to get even half of the available skills before advanced classes open up - meaning lots of possibility for customization of classes. Have three different Rangers in your party? Make them all unique with their own specific play style and complementary skills.

Skill types include PASSIVE SKILLS like the Cavalier's One Handed Sword Training: 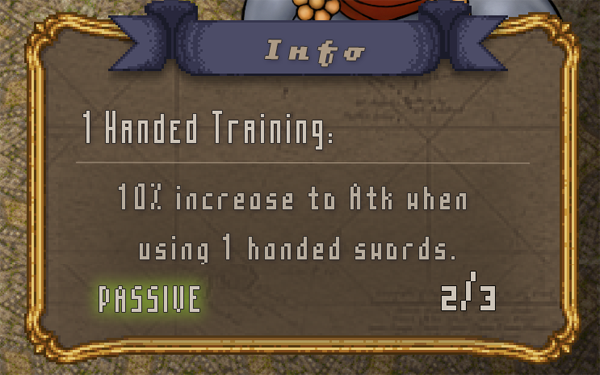 We're also excited about some ACTIVE SKILLS with special MODIFIER skills you can add, like these two with the Apothecary class:

And of course, we have MOVE SKILLS, SUPPORT SKILLS, and REACTION SKILLS you can equip to further customize how your classes work in battle. We'll reveal more on these as we begin to implement them into the battle system.

And as with any large jump to a new system like Unity, we've hit a few programming and logistical snags, but the mapping system is nearing completion after finding ways to get large obstructions like buildings to play nicely, and we'll then turn our focus to cutscenes and skill implementation in the battle system next.

Moritz is also hard at work on some menu and map music to complement the work Patrick is completing on the menu systems. Check out his Twitter for some samples to wet your appetites!

We'll see you all soon, and if you pick up Skyrim for another 1000 hours of Viking Dragon goodness, please remember to treat yourselves to a little sunshine!

I will always be impressed at how beautiful this game is.

thanks so much! i'm trying~