In the third Kickstarter update, we show off the newest game mechanics to be implemented: water tiles and characters that can traverse them. In this article, we explore the development process for them in more depth. 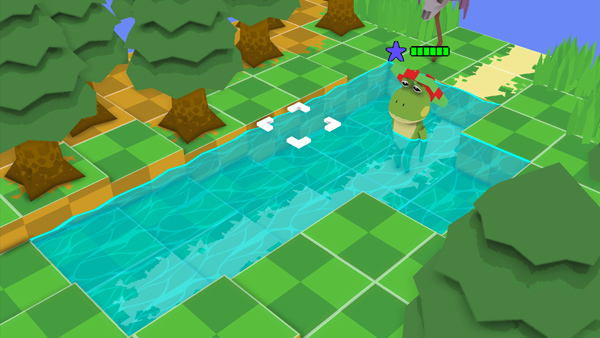 Kickstarter update #3 has just been published, in which we show off the newest gameplay mechanic to be introduced to the game: water tiles!

This adds a whole new layer of depth to the game since it creates areas that some characters can enter, while others cannot.

The AI is already smart enough to know to steer clear of water tiles if it doesn't want to get its fur wet.

The water tiles create a tactical advantage for the frogs because they're able to leap out for a sneak attack even in deeper water.

As for the water shader, it is based largely on this excellent tutorial by Joyce (support her on patreon!)

I began messing around with the wave shader to see if it would tile properly for the implementation here. Getting the vertex positions in local space wound up giving me what would have looked like little wave clusters in each tile. Since I had use positions in view space for the grass, I thought that might work but then quickly remembered that it wouldn't be consistent at all angles (or rather, it would be TOO consistent at all angles), which is a shame because it achieved a good sense of randomness to the movement:

Another headache I came across: I forgot that depth is handled at the same time as shadows in the rendering pipeline for unity, so the depth effect highlight wasn't displaying because Wolf Gang doesn't actually use lights at all (save for one in the World Map scene). I wound up solving this by adding a fallback to VertexLit in my unlit textures (lol) and setting the depthTextureMode of the camera to Depth.

Here we see the depth effect finally working, but without the tiles fully being implemented into map editor system. Another modification to Joyce's shader was the use of step() instead of saturate() just so I could get a solid line for the highlight rather than the gradient.

And finally, the addition of the texture, and a scrolling animation to give it a sense of some movement. Everything in the water is adjustable so the same components can be used for anything from a still pond, to a roaring river.

Or even a jacuzzi!

Once again, do not forget to check out the Kickstarter project for Wolf Gang, and to share it with your friends if you think it's something they may be interested in! Once again, thank you all for your support, and for helping to make this project a reality!