In a previous blog post I mentioned that we spent a few weeks of reasonably intense prototyping to try to help us get a handle on what we want Friendship Club to be. Up until that point the game design was still a little under debate and we were unsure where to put the design emphasis. It was largely a question of how much from the basic game experience did we want to deviate and how did we want to present those options.

In a previous blog post I mentioned that we spent a few weeks of reasonably intense prototyping to try to help us get a handle on what we want Friendship Club to be. Up until that point the game design was still a little under debate and we were unsure where to put the design emphasis. It was largely a question of how much from the basic game experience did we want to deviate and how did we want to present those options. Since playtesting a bunch of variations of the mechanics we've got a much better understanding on what we want the core of the game to be and how we want to structure the additional modes and gameplay elements to complement it. Production up until this point has largely been us throwing things into a big cooking pot, and we are now in the act of reducing it down.

In the week following Friendship Clubs inception at the game jam in November 2013 I made a Trello board for us to store ideas for its future development. At that point we weren't sure if any further work would ever get to happen on it, but I wanted to be sure to capture any thoughts we might have whilst our minds were still on the game. Roll forward a year and it'd become a bit of a monster with somewhere in the region of one hundred tickets, ranging from character and world ideas, through to sound effects, silly voices, anything and everything. It's worth noting that this isn't the production board, we have a separate physical board for that which I'll get to later*. 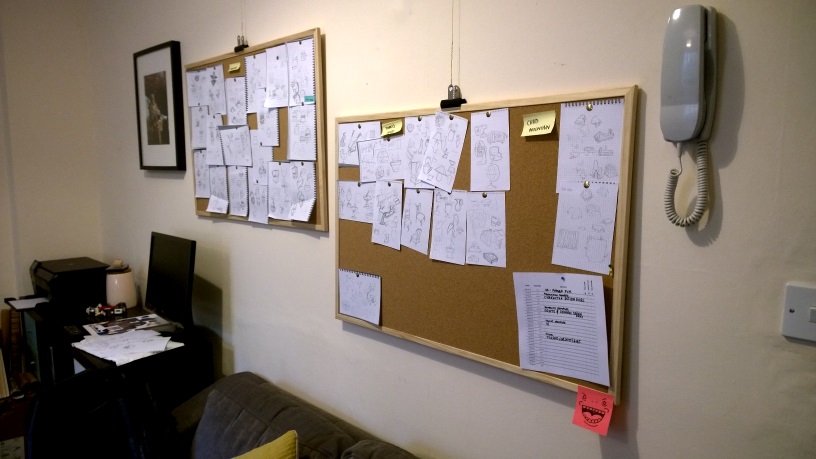 After a cloud service changed its pricing plan we decided to go back to doing concept boards the proper way.

This past week I've spent a bit of time going through all of our tickets and assigning them various labels pertaining to their status. Anything which hasn't made the cut gets archived. This might include things that we tried and didn't like or old ideas that are no longer relevant for whatever reason.

The labels are as follows:

The definitions here should be reasonably obvious. It's worth noting that the Needs Prototyping can apply to ideas that are both in the process of being greenlit or dropped, as well greenlit ideas that still need either art or gameplay prototyping done on them to prevent waste. An example would be something like a game mode that requires specific art assets - there's no point us spending time on those assets until we've tried it with placeholder art.

The keen-eyed amongst you will notice the v1.0 and v1.1+ labels suggesting there might be additional features released post launch. Indeed this is the case, taking the form of free DLC. We have *so* much we want to put into this game, but we don't have the cashflow or reserves to make some of it a reality at the moment. Apart from a paltry art grant we are entirely self-funded. This also drives our "Pay for Current State" approach to pricing. We can't predict the future and we've seen quite a few high profile failures on Early Access (cough cough) lately and we're not in the business of cheating or ripping people off. This has been our approach ever since we first starting selling the game direct. Buying it now will get you all future updates for free and if we can make the game the success we want it to be then it will help fund more development, with early adopters getting themselves something of a bargain. We'd rather things that way 'round than the reverse, where early adopters are getting screwed with broken builds for months and then kindly informed "That's it, that's all you're getting." 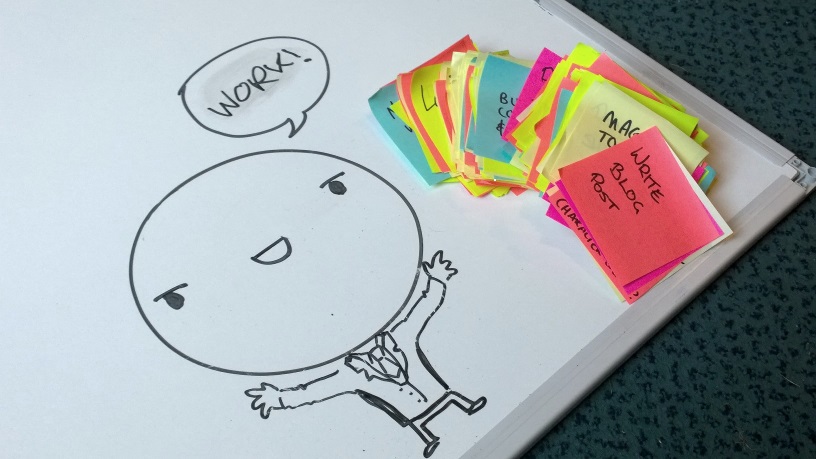 Some of the completed tickets from Friendship Club.

We still maintain a physical project board, split into columns for art / code / audio / QA. Populated with coloured post-its, this is where we do the day to day ticket writing, breaking down the Trello tickets with all their comments and ranting, into single tasks. It's worth noting that originally we were using Trello for this as well, just as we did with Toast Time, but with four of us on the project and in a single building it made sense to have somewhere we could gather 'round and chat. Using a big TV is obviously an option for digital boards, but we didn't have one at the beginning of the project. 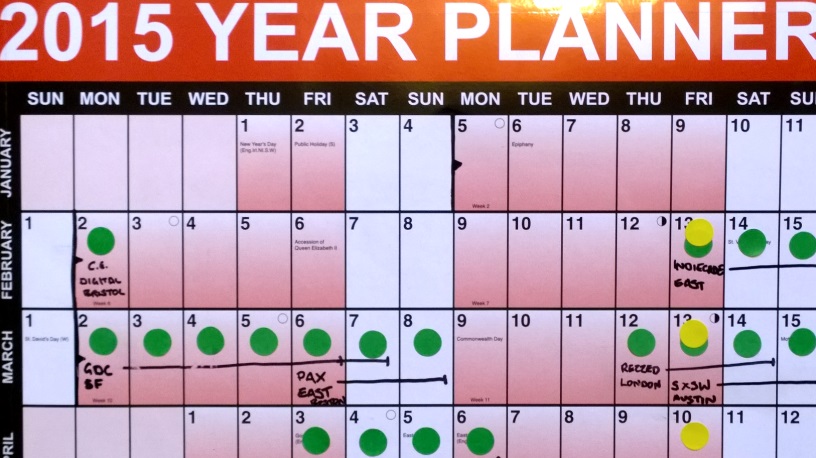 There's no way a caption could make this photo any more exciting than it already is...

With features now organised into milestones we could go about doing some time estimates and plotting out the plan of attack. To this end I decided to leave behind the digital calendar's we've used in the past and get ourselves a cheap, crappy year planner, the type you'd see sprawled and oil stained across a car mechanics desk. The reason for doing this was it gives a much better overview than most digital calendars (as far as I've found) with a true overhead view of the whole year in a manner that we can all gather around and discuss. With the planner pinned to a board we went about covering it with stickers (yay!). Green for expos/shows. Yellow for minor releases (every two weeks). Orange for major releases. Pink for MAJOR major releases. As soon as we'd actually plotted out a selection of the major shows, it gave us a much greater idea of how we wanted to plan our approach to release and marketing, and where we could set-aside time for code freezes, QA, trailers and so forth.

Whether we manage to stick to this all is another question, but it's a strong start and and in the ultra-ultra competitive world of games development it's important to give yourself every chance you can, no matter how slim. It is a question of survival. There's a famous saying "The more I practice, the luckier I get". I think the same could be said for planning. At least I hope...

How do you manage the production of your game? Much different to our methods? Let us know in the comments here on IndieDB, on Twitter or on Facebook.

*USEFUL TIP: Force Of Habit have always kept a Trello board dedicated to all our game related ideas. This is organised into lists for mechanics, themes, characters, games and so forth. We can then dip into this whenever we like for inspiration regardless of what we're working on. I recommend it - notes are only as useful as your ability to retrieve the information in them. Also, this non-linear arrangement means that you can sometimes make unexpected connections. I might write a blog post on this in future...