Update on the latest development on Deep Space Settlement for the month of June: Drones, AI Nexus, Code Reflection.

I’ve been writing the “reflection” code to implement the save game mechanic and I’m very satisfied with the result. Here’s a taste of what I can do with it:

This is the output of the memory used by a class called “gm::MetaComponentCfg” (the configuration of a ship component) with all its members, where they are in memory and what value they currently have. Knowing this structure make it possible to serialize the data into a file automatically.

Now that it’s working properly, I must unify the system throughout the engine and the mod API. Prior to this I was using a slightly different serialization mechanic in engine and mod API, I’m really happy to remove all this ugly code and replace it with the new and improved system but it’s a lot of monkey work.

June started out with me working on turrets and a turret platform for the enemy nexus. Stylistically it’s the same as the nexus itself: a light/dark value duality. The platform has sockets for 4 turrets and each turret comes with 3 barrels. When attached to the Nexus, these turrets will be “size 4”, which is one size bigger( 250%) than the turrets on the human turret station, colony ship or cruiser. 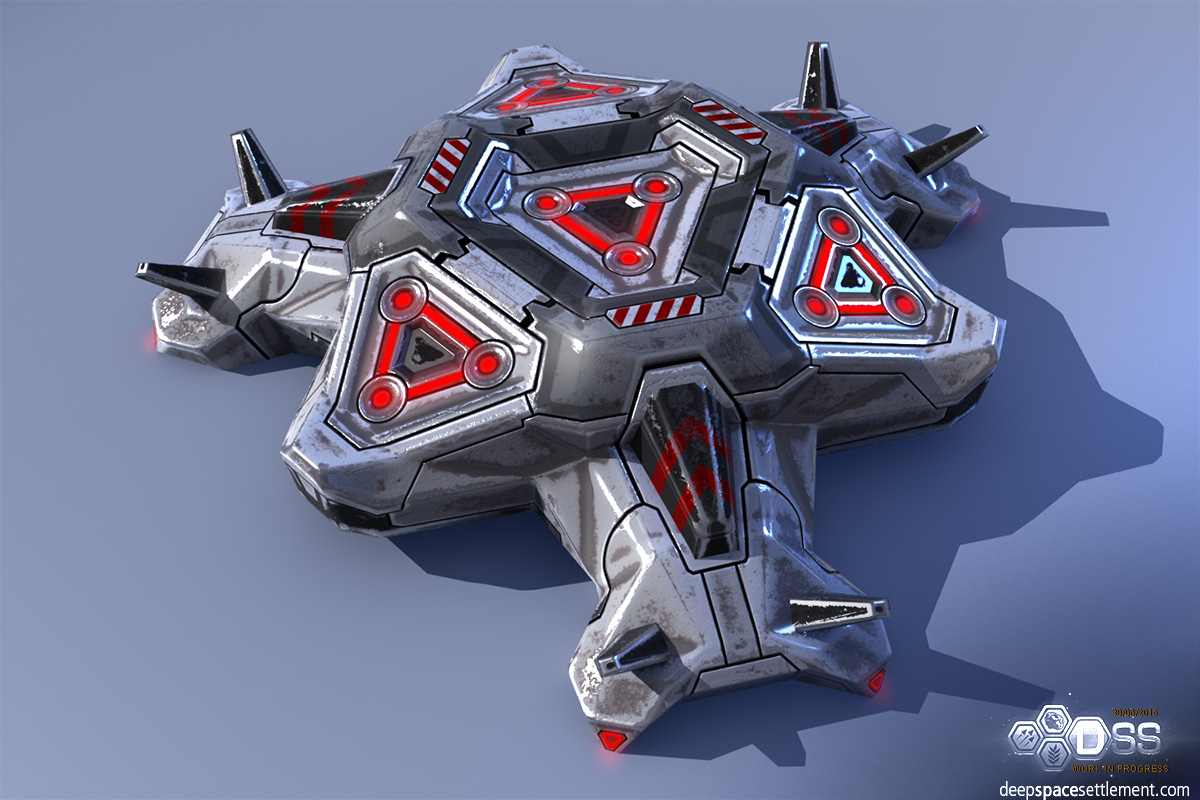 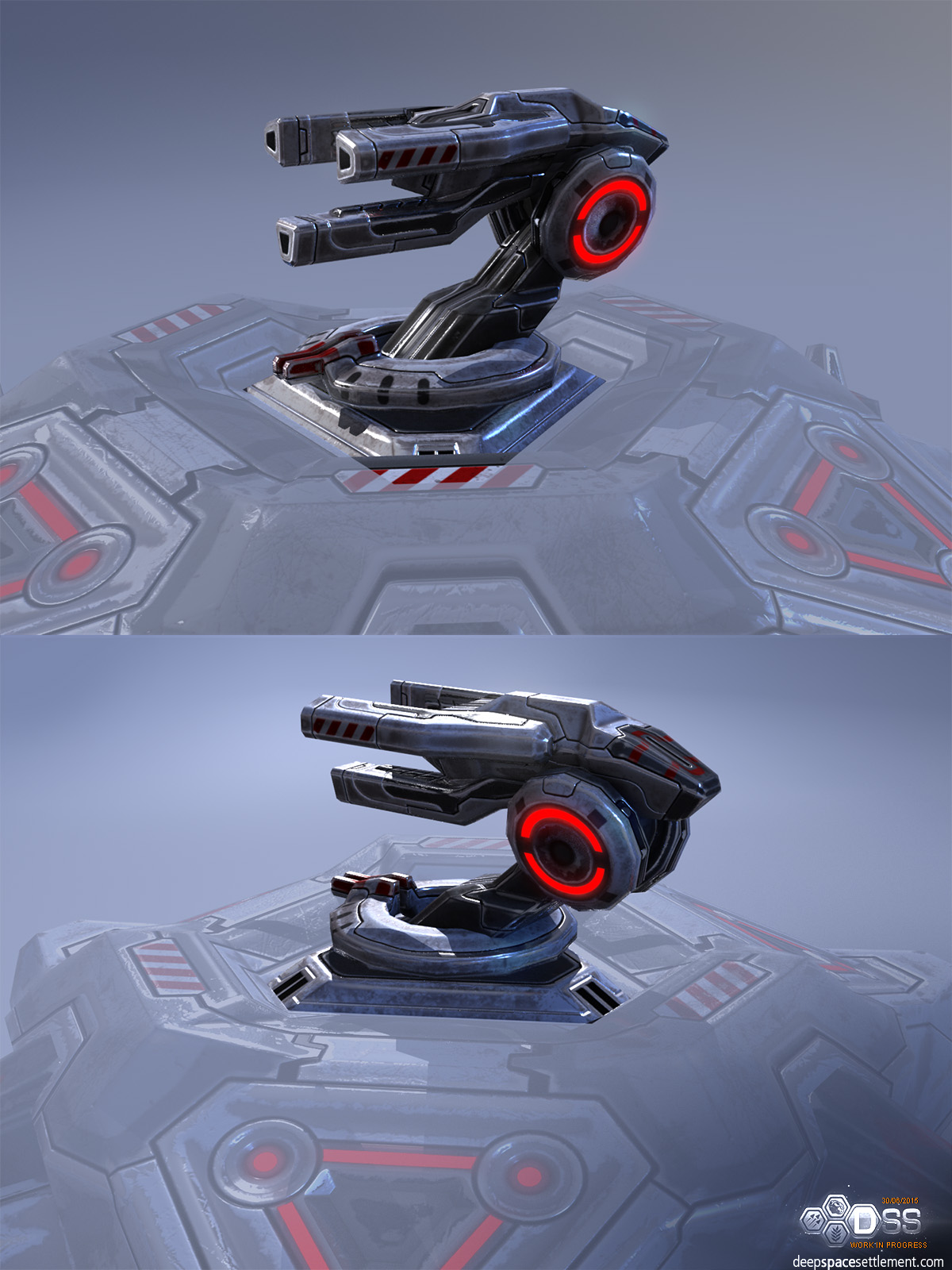 Once I had finished the turrets I went back to the Nexus model. I had proposed to Stephanie to turn the model into a wreck to get more use out of it. The idea is to have it be another object the player can find and research and perhaps scavenge.
Wrecks are also a great opportunity for storytelling, as you could find recordings or messages in them.

Anyway, I took the model, turned off the lights re-positioned and re-oriented elements and added a lot of smaller wreck parts from the ship wreck I did maybe 2 years ago. This is the result in-game: 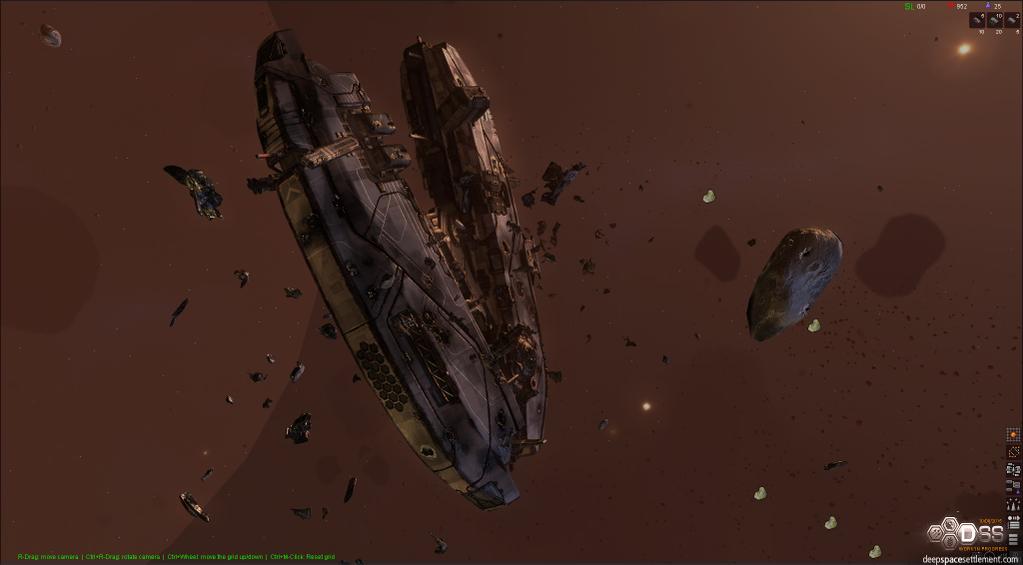 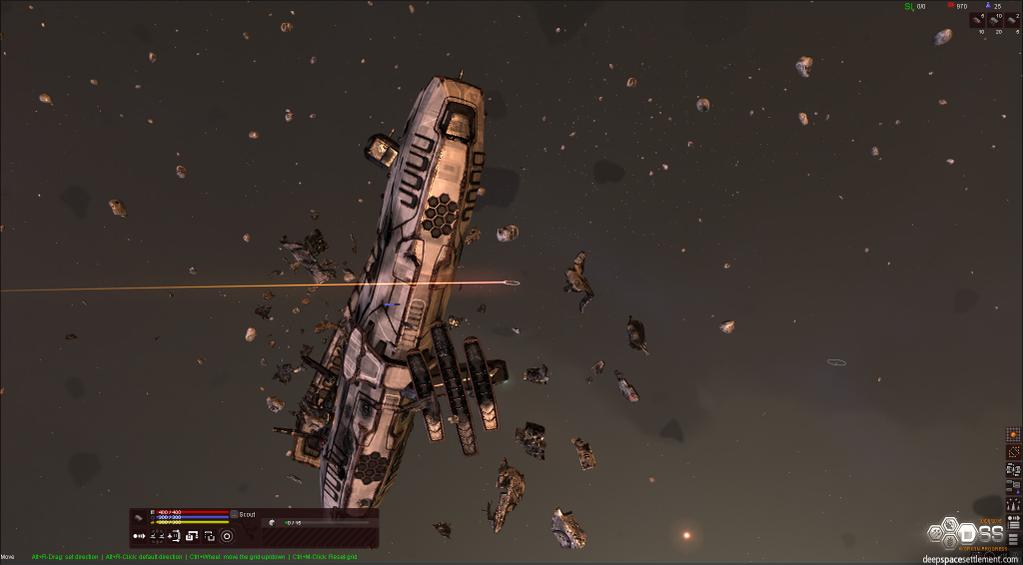 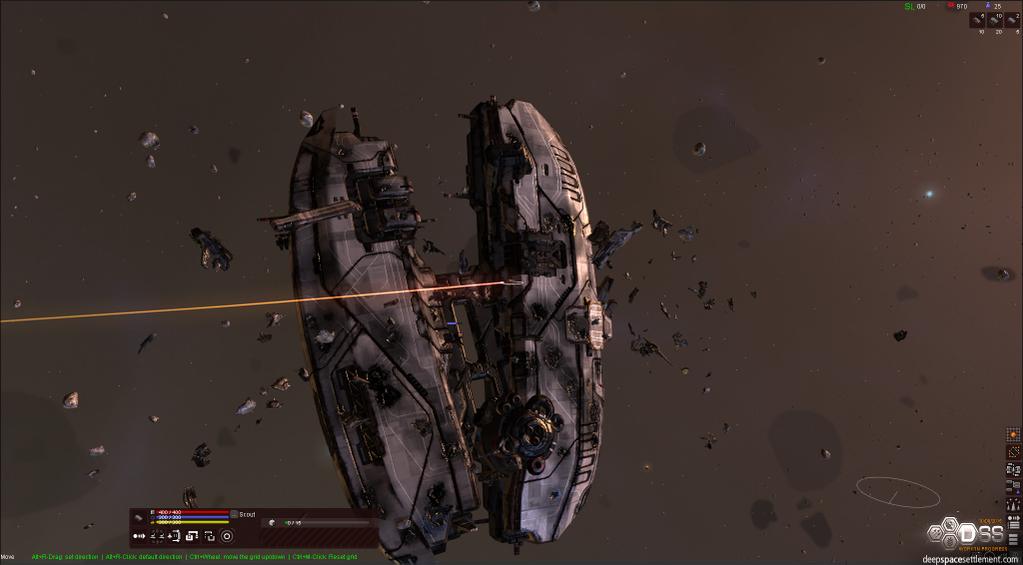 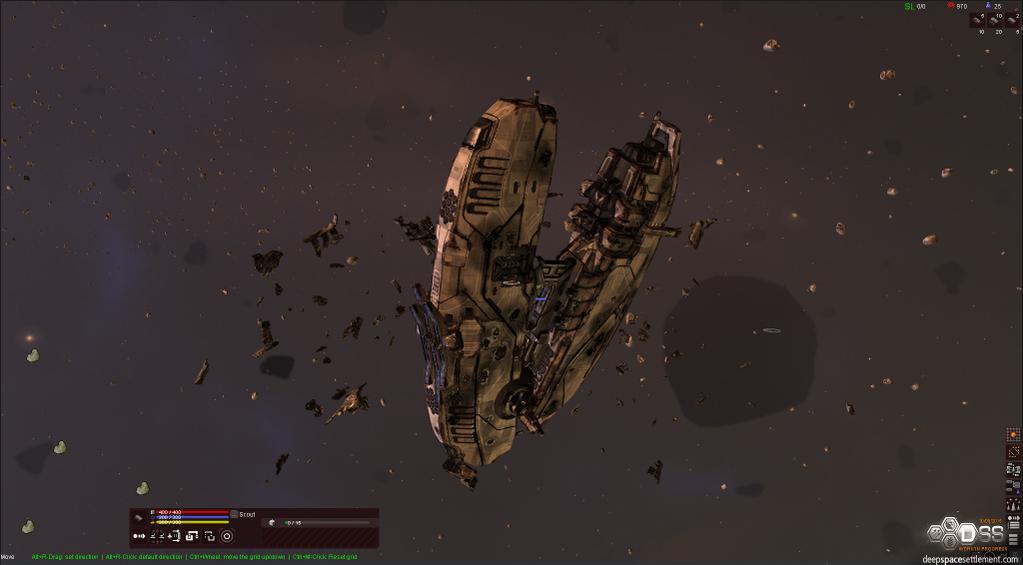 I then turned my attention towards drones.
Drones are the smallest unit and with ~10m in length about 1/3 the size of corvettes. They are structurally simpler than corvettes too. They are built from 3 pieces: a body/core a front with integrated tools or weapons and a tail with integrated engine(s).

I had campaigned for them for a while, as I think they are essential for the FP. The idea is to be able to produce them immediately once you’ve build your first colony station(maybe after some research though) - unlike corvettes, for which you need to build a shipyard, which in turn requires factories, refineries and perhaps a lab station.

There’s gonna be 2 types of drones for now: mining/transport drones and repair drones. I’m hoping to do attack drones later :)

The purpose of the mining/transport drones is to get the economy going, increase your mining, accelerate the logistics etc. at least until you can do the same(and do it better) using corvettes. 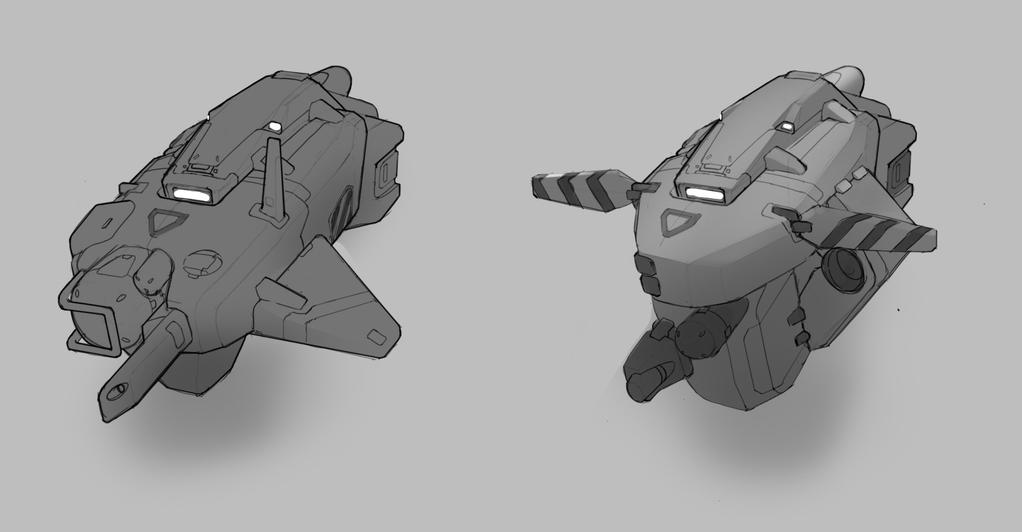 Both of these are built already and i’ve just started texturing. Below is the central body/core. 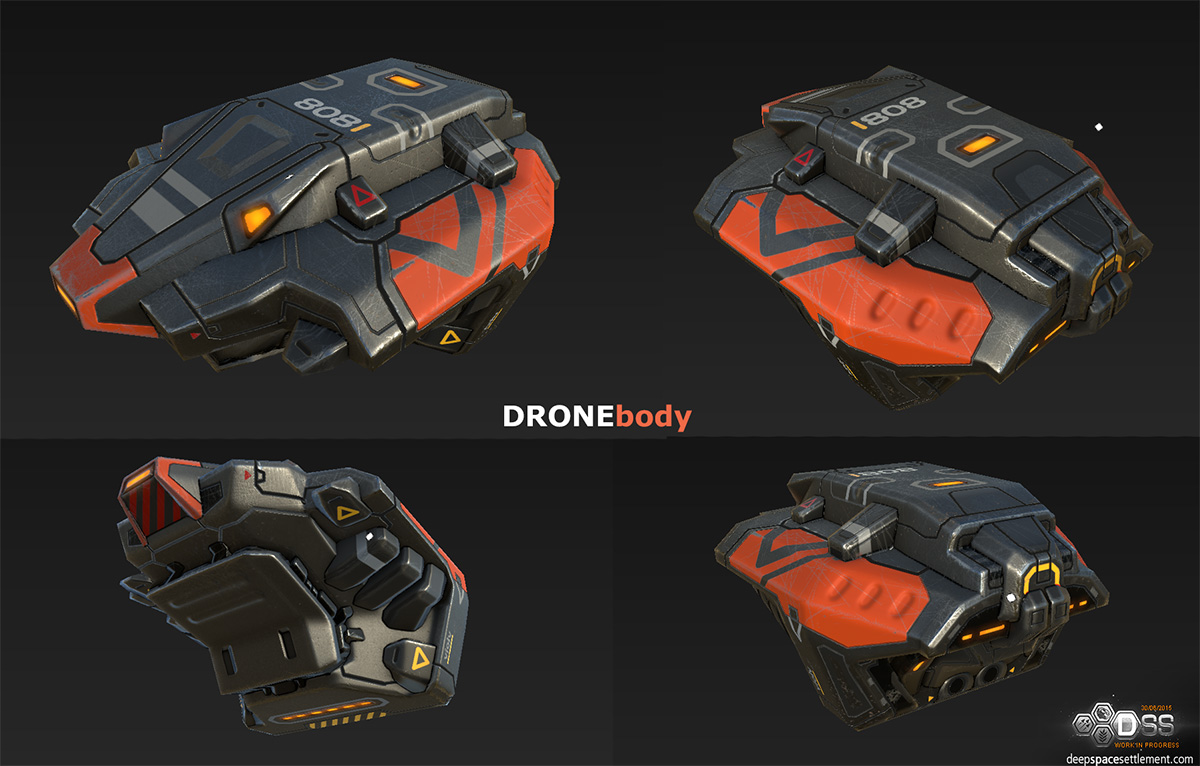 Always fun to be given peeks under the hood. Looking forward to this.

I can't wait to get this game and build them, as they look similar to the Resource Collectors from Homeworld 2, with their bodies looking they way they are in the textured pictures :D "Resources downrange."

Wow the drone looks stunning, and the turnaround video on the wreck was cool too!

ah programing. one of the many reasons i cannot make my own game (;-;)