Check out some info regarding Weapons (Skills, Attachments, Customisation, Ammo Types) available in Within the Cosmos, a Sci-Fi RPG, as well as new GIFs and screenshots!

Hi everyone! For this development update I'll be talking about Weapons & Ammo Types. This isn't a complete list of every weapon that's in the game, but it's more of an overview of how the weapons and ammo types work together and how they tie into the RPG aspects of the game.

Initially, I had intended on going with a Mk. I, Mk. II path of progression for weapons (finding better versions of the same weapon as the game goes along), but eventually, after playing through the game a few times, it didn't feel right. I ended up with weapons that no longer served a purpose, as I was able to find better, upgraded versions of them. After this experience, I wanted to make every weapon viable from the beginning to the end of the game. I wanted to ensure that if the first weapon you find in the game is your favourite weapon throughout the journey, then you should be able to use that until the very end. As a result, there are no longer any Mk. I's and Mk. II's in the game. With the extra time I allotted for the games development, I was able to add new weapons to the game. I set out to make sure every weapon can stand on its own. However, there still needs to be some form of progression for weapons, and that progression comes in the way of Skills, and Weapon Attachments.

Since this is an RPG, how effective your weapons are in your hands will be largely influenced by your Skill in that particular weapons field. These are the major skills that will govern how your character handles each weapon. This also gives you an idea of the type of weapons in the game.

Improving the skill that you desire will reduce the recoil while firing the weapon, and increase the damage, as well as unlock some perks. Don't forget to add Skill points to them when you level up! 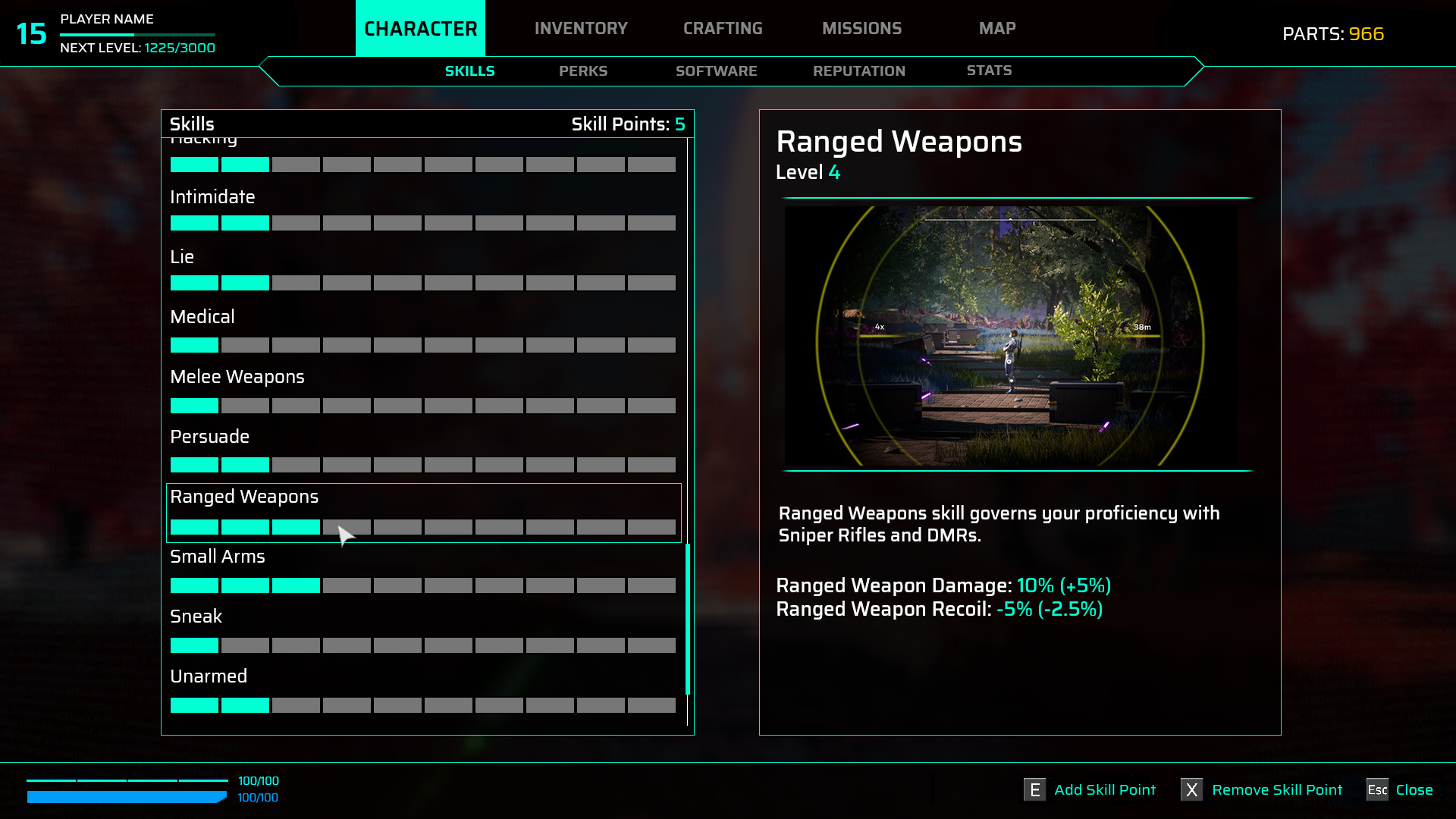 Weapon Attachments can be found while exploring, and they can be purchased from shops. There are 4 slots available for most weapons where you can equip different types of attachments. These are:

Optics Slot:
Optics slot will dictate what kind of Optics/Scope you will use on your gun.

In this GIF, I'm using the Recon Scope, which highlights enemies. This is especially useful when exploring at night. I also used the Time Dilation software so that I can line up the perfect headshot!

Muzzle Slot:
If you want to go with a sneaky route, make sure you equip a Silencer on your Muzzle slot. This will largely reduce the amount of sound that the weapon produces when fired. 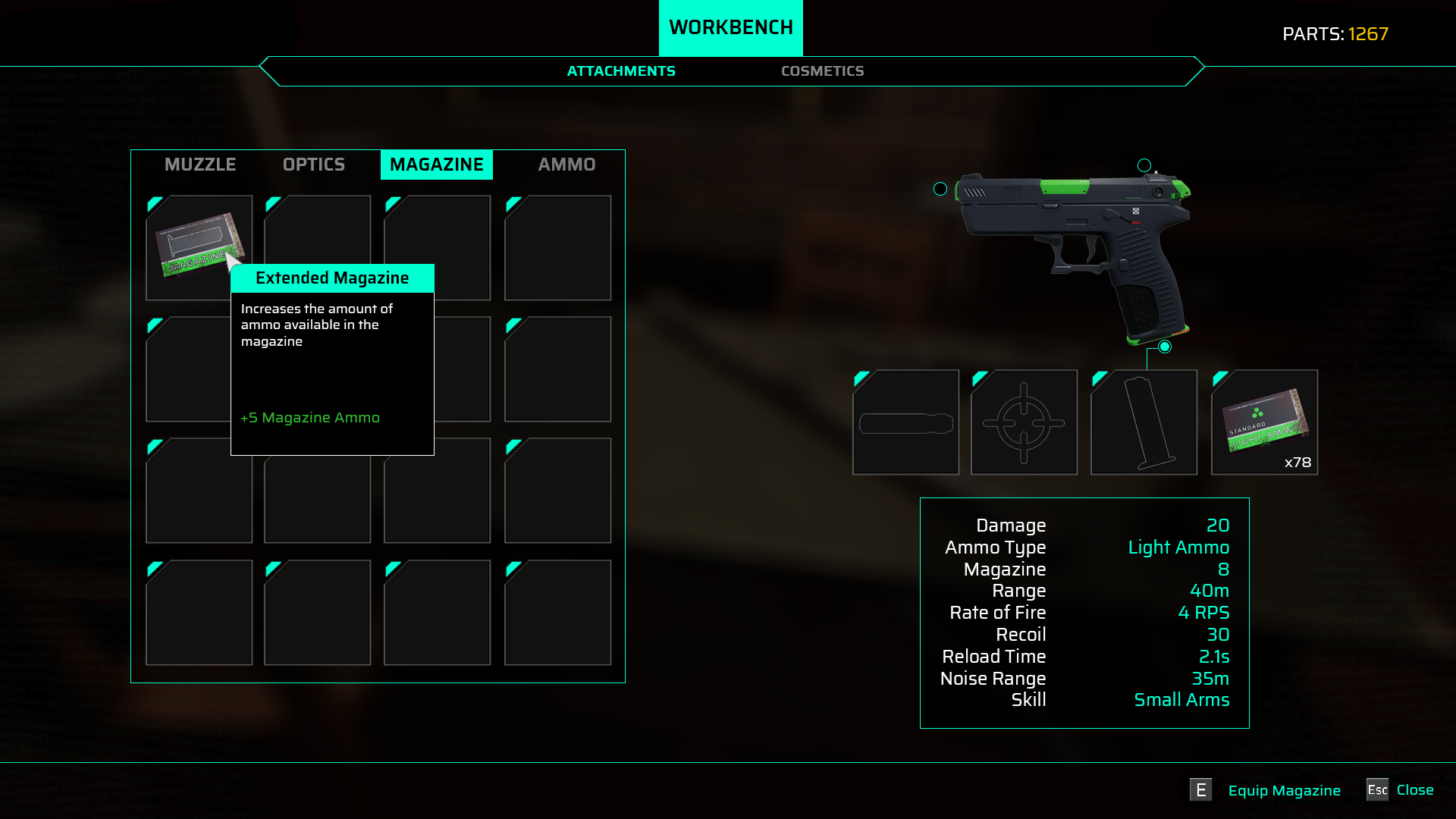 This is where you'll select what type of Ammo you want your weapon to use. This slot is more complex than the others, so I'll go more into how it works. 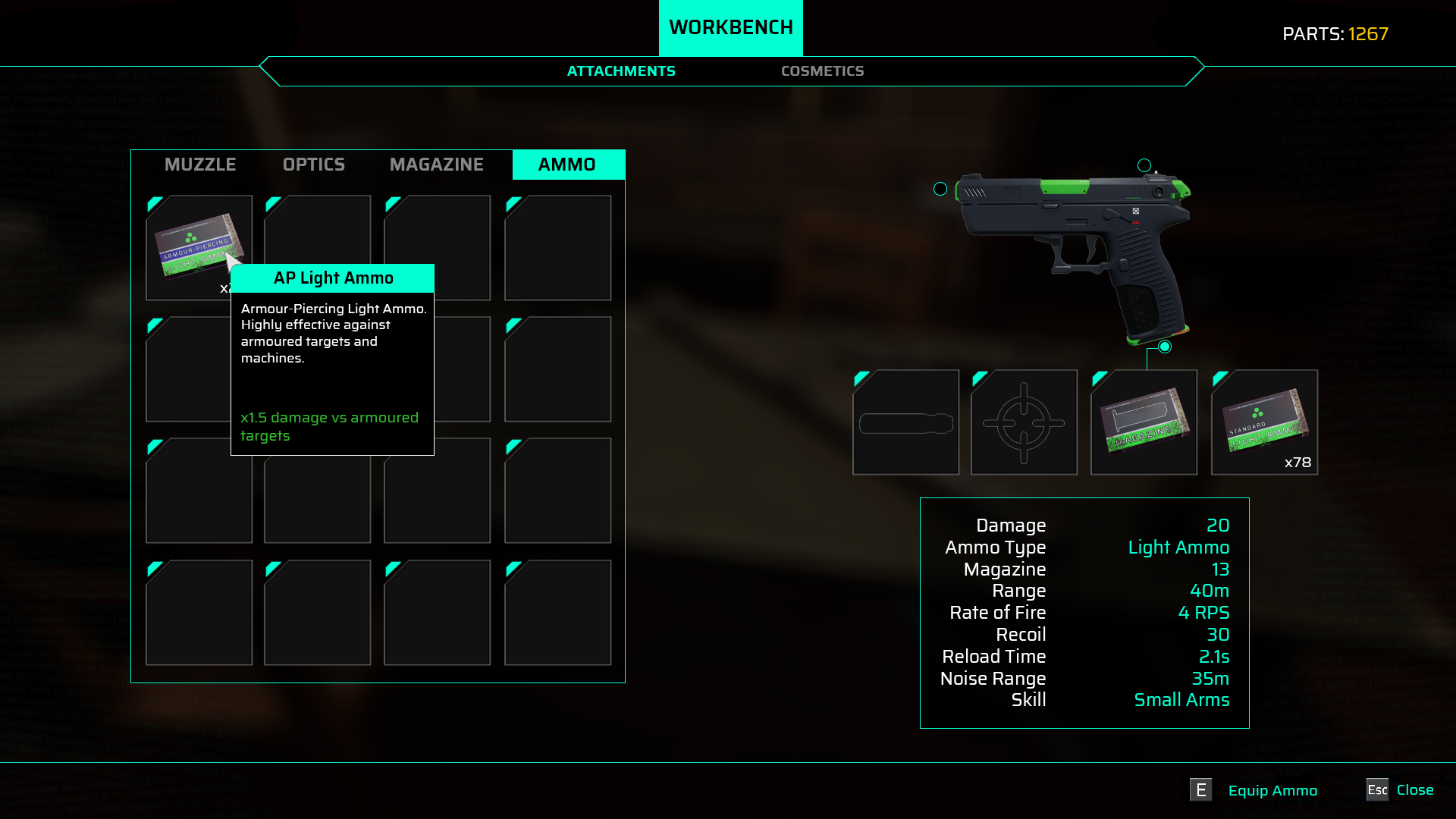 When modifying your weapon, you can select the type of ammo the weapon will use. The type of ammo that you equip on your weapon plays an important role when encountering enemies. If you want to be efficient, you need to equip the correct ammo type for the situation that you're in.

There are 5 categories that ammo falls into, and they are intended for different groups of weapons. They are:

Regular Rounds:
Regular rounds are the standard variant that weapons use. These are mostly effective against organic enemies, and less so against armoured targets & artificial enemies.

You can also edit your weapons to alter their appearance, purely for cosmetic purposes. These allow you to personalise your weapon.

Charms:
Charms add a little bit of life to your weapon! These can be purchased from shops and also found throughout the world. 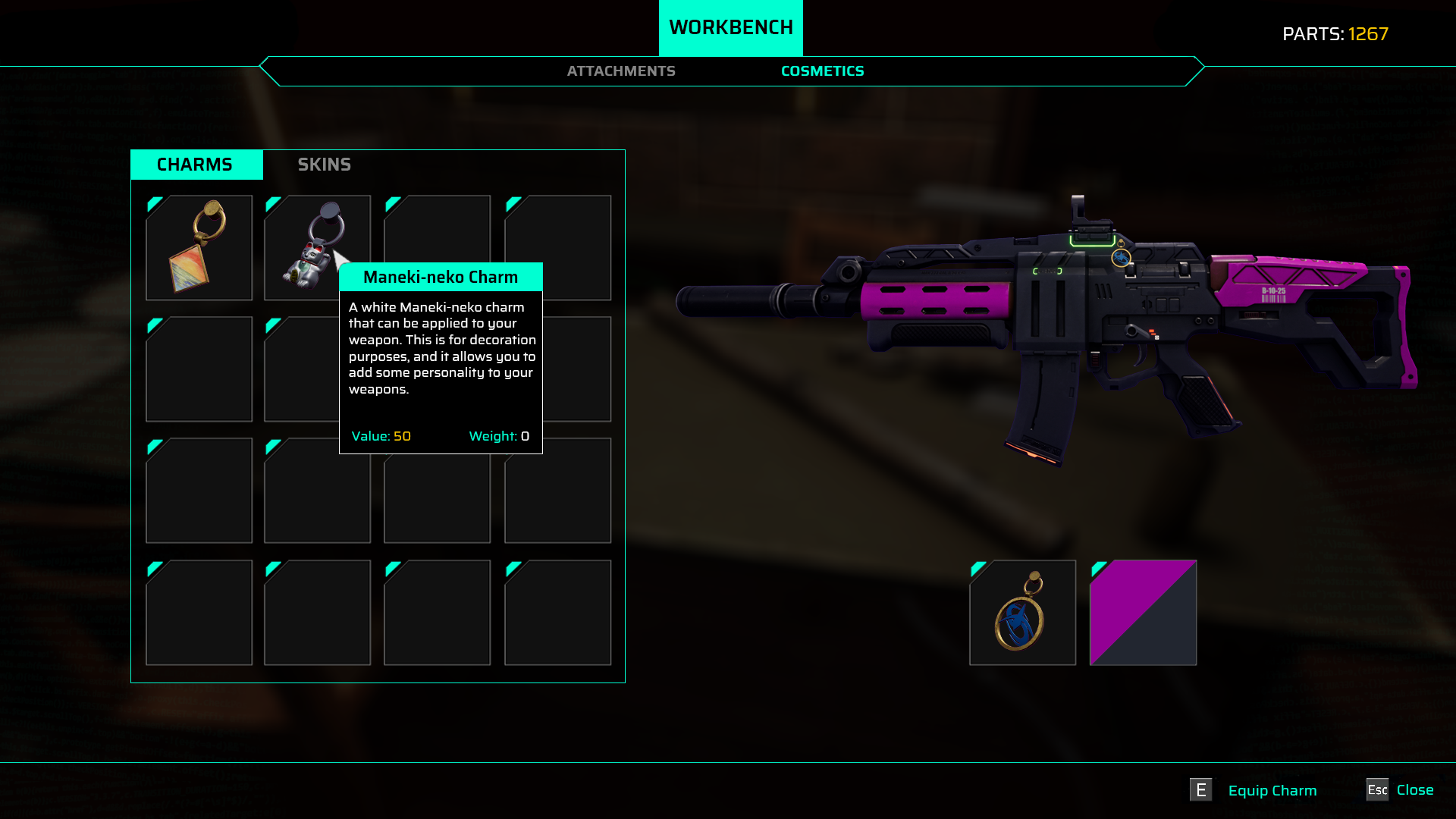 Weapon Skins:
If you want to represent your factions colours, or any other colour you want, you can recolour your weapon and select one that suits you! 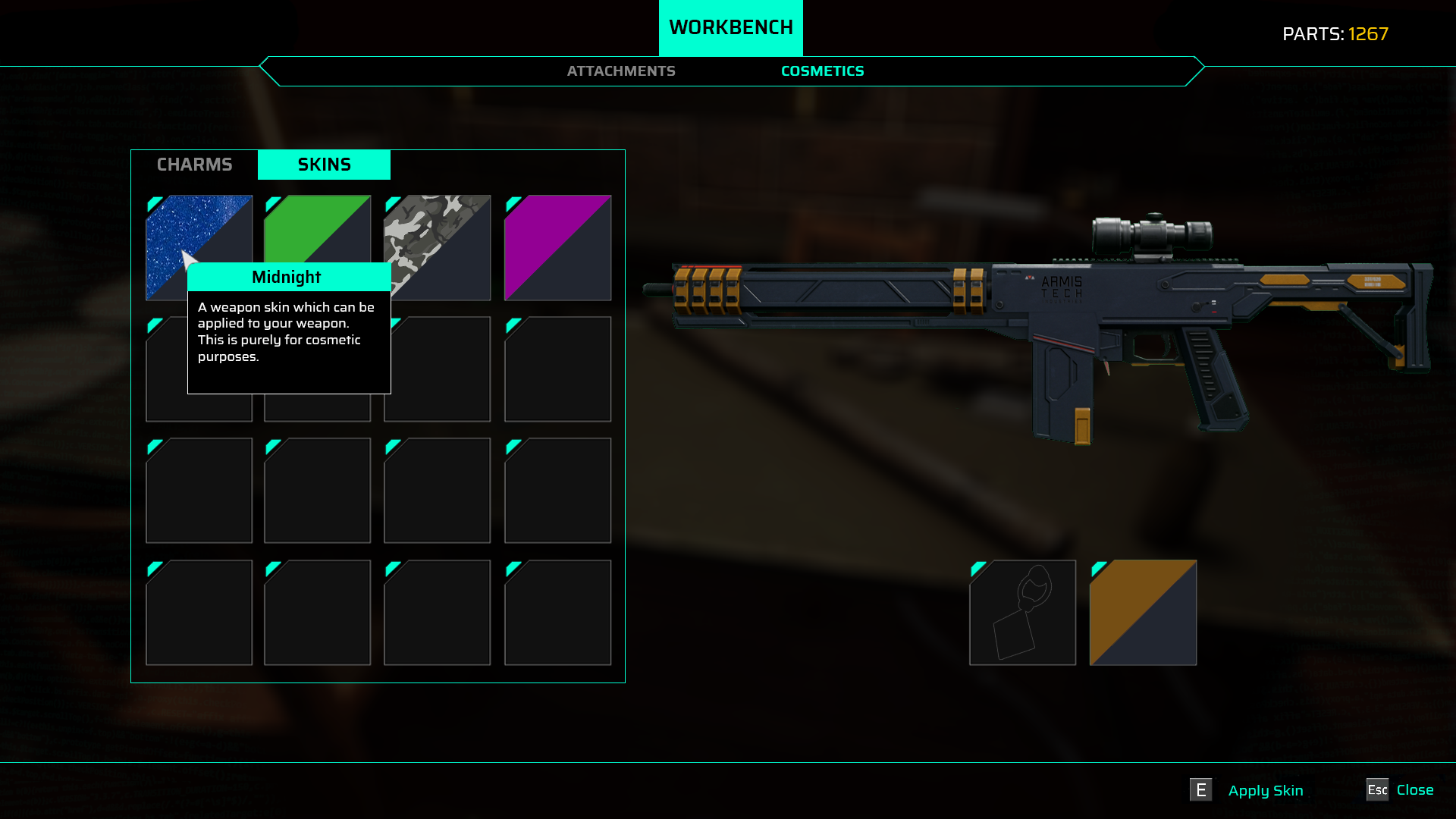 I wanted to post this development update about two weeks ago, I apologise for the delay. This is the final major development update post for now, as I'm going to shift my focus to finalising some aspects of the game and then creating a new gameplay video. The game has changed so much since the last video was posted (almost 2 years ago now! Wow). I'm so excited to show all of you the improvements and changes, and get your feedback!

As always, I want to sincerely thank all of you for your patience while I'm creating this game. All of your comments are uplifting and motivating, and they mean more to me than you can imagine. I'll never tire of thanking all of you for spending your time checking out my game.