"The Traders" update focuses on making the game more fun and less of a chore. Lot's of usability fixes, in addition to a few new mechanics that have long been requested by our players, such as trading and scrapping unused equipment.

Survivors, the end is nearing. Will you survive that long? Update 13, with all it’s new goodies is now available, while we’re hard at work on the full version, with tons of new content and a full campaign.

Our main focus in this update was around polish. A very large portion of the changes introduced were inspired by player feedback and suggestions. We tried to improve the most annoying parts of the game, improve usability, and make the whole thing smoother. There are also a few new mechanics, a bit of new content, graphical improvements and many bug fixes.

A big thanks to all the players that played update 13 in the beta branch. Thanks to your efforts we were able to identify and fix many issues for a more stable main branch release. 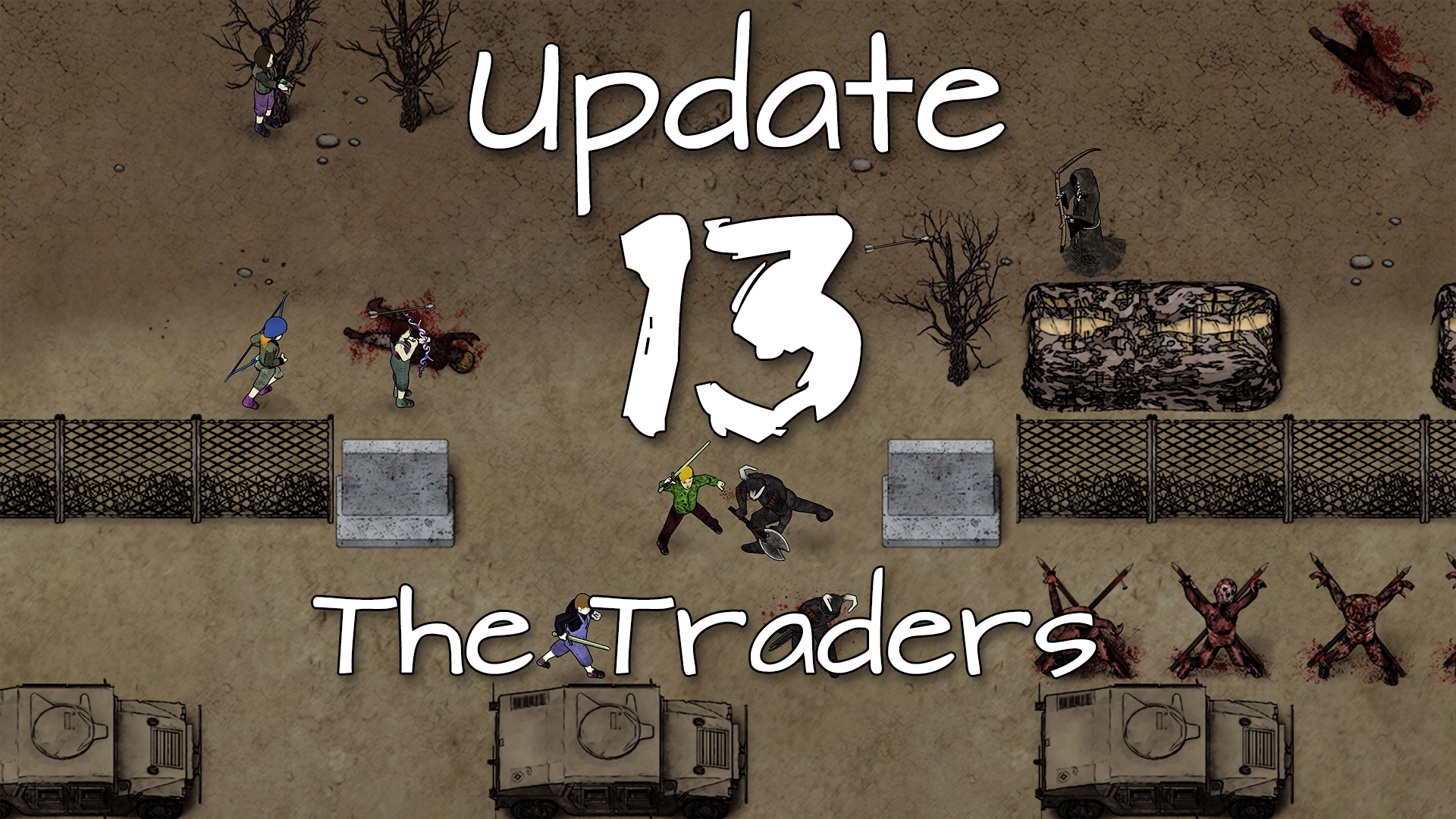 In update 13, traders have been introduced to the game. Scraps are no longer necessary to craft or build all items, instead they are used as currency. Every once in a while, survivors that are not part of your colony will drop by and offer to trade. If you’re missing those items you couldn’t find, or don’t have the skill to create, these traders will be happy to provide them, for a hefty profit. Sometimes traders will have rare equipment that you can’t make yourself, or beyond your technology.Traders stock is randomized every time a trader arrives, and the level of items depends on the stage in the game. Later in the game, when stronger demons attack, you will also be able to find stronger equipment in the hands of these traders.Build a strong economy, craft stuff that you don’t need so you can sell them for profit, and use those “funds” (scraps) to buy what you do need. Traders add a whole new aspect to colony management, where producing more than you need can prove beneficial.This update also comes with the added benefit of removing the artificial scraps bottleneck that had you running around searching for scraps all game long, no matter what you wanted to craft. Scraps are still very valuable, but no longer a bottleneck. 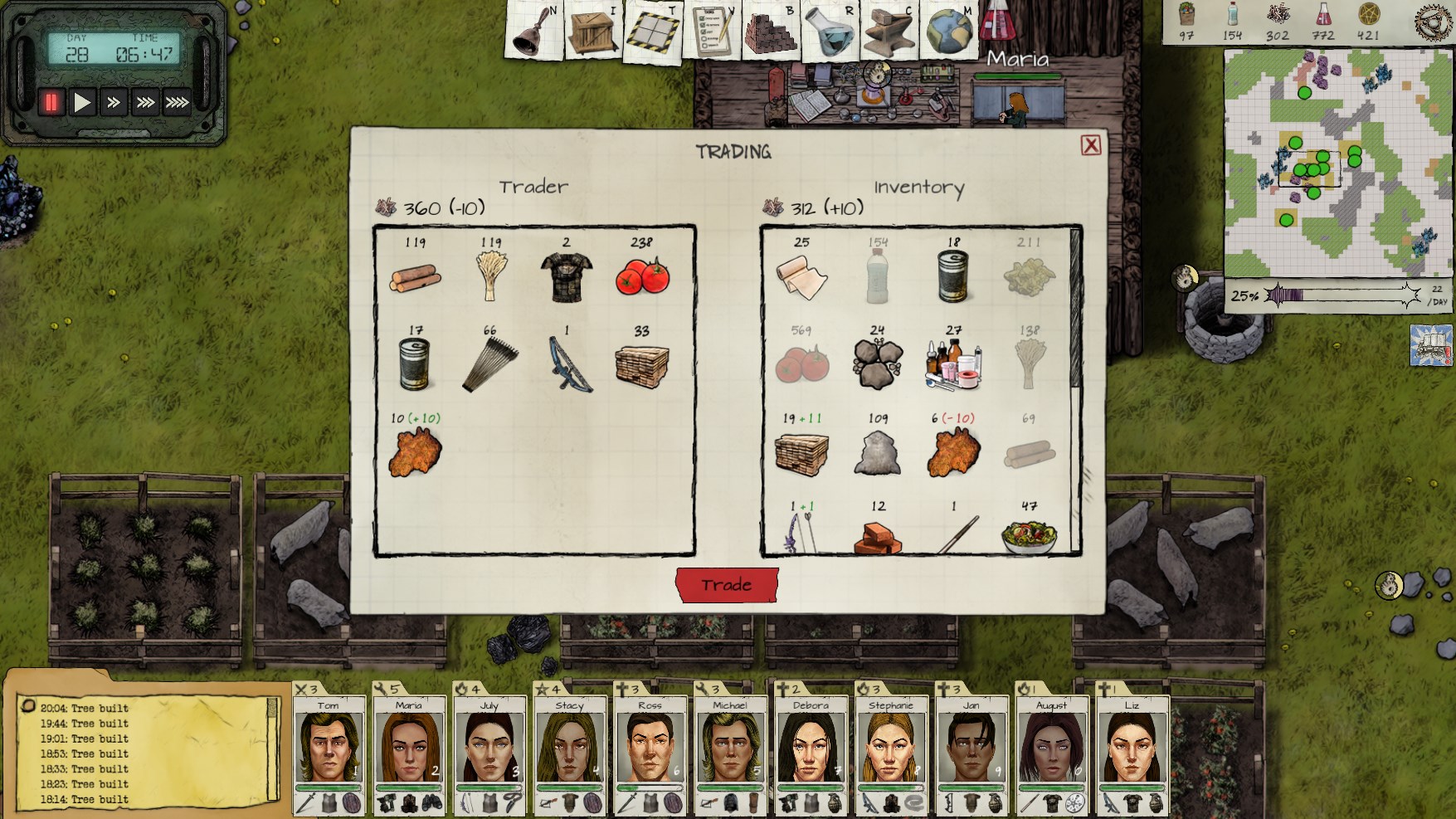 Sometimes when you grow strong, but you need some clay, or stone from a scavenge location near your base, with a few pesky imps guarding them, it feels redundant and boring to fight them.Here comes auto-combat. For scavenge missions, you may now choose to run a combat simulation instead of actually controlling it. In most cases this simulation will be less effective than manual control. It will not make use of cover, flanking, and activated abilities. It is very useful, however, to skip easy battles quickly. 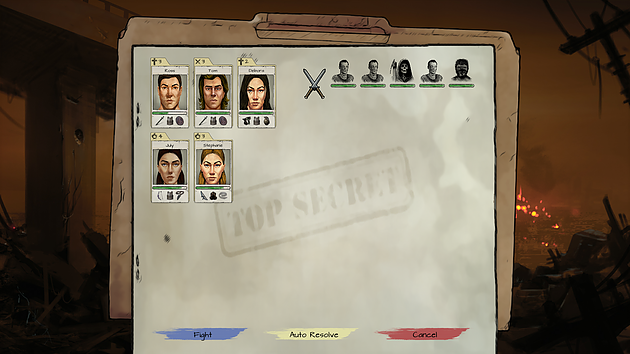 One recurring complaint from players in previous versions was that they often found themselves stuck with outdated equipment that they have no further use for. In this update, there is now more than one use for such outdated equipment. You may sell it to traders for some scraps, or you can choose to scrap the equipment to get back half of the resources used to craft it.

Equipment that cannot be crafted may also be destroyed for some scraps, but less than you would get by selling it.

Several improvements were made to combat animations, making it feel smoother and more fluid. Walk animations, attack animations, and the animation between attacks have all been improved.In addition, new survivor portraits have been drawn and replaced the old ones. There are now 10 faces per gender with 6 different hairstyles. We also changed a bit the default portraits, these are the portraits that are generated automatically. These are now a bit more restricted for appearances that make more sense.Manual customization of appearances is still possible, just like before, and much less restricted than the default characters. Go crazy with any hair and body color combination, just like before.

A major part of this update is about usability improvements. You can now define minimum/maximum gather limits to better control your economy.When assigning tasks, survivors will now ignore gathering tasks if you already have enough in stock. A problem often encountered by setting such limits was survivors running back and forth. A survivor would gather water until the goal is reached, then move on to another task, but before even reaching that other task, someone drank some water. Now the water stocks were below the goal again, and the survivor would go back to gathering. This was very inefficient, spending more time walking around than actually working.Our solution allows you to define minimum and maximum settings, creating a “neutral zone” in between. So survivors start gathering when stocks are under the minimum, all through the neutral zone and until reaching the maximum, then stop. Now as people drink, the stocks would go down from the maximum all through the neutral zone until they reach the minimum, only then will gathering start again. During this buffer survivors can perform other tasks for longer periods of time, spending less time going back and forth.The same logic is used for automatic crafting.Note: Unlike automatic crafting, gathering limits do not designate gathering tasks automatically. You still need to define which trees to chop, stones to quarry, and so on, but feel free to designate large areas knowing survivors will pause from performing these tasks once the limits are reached. 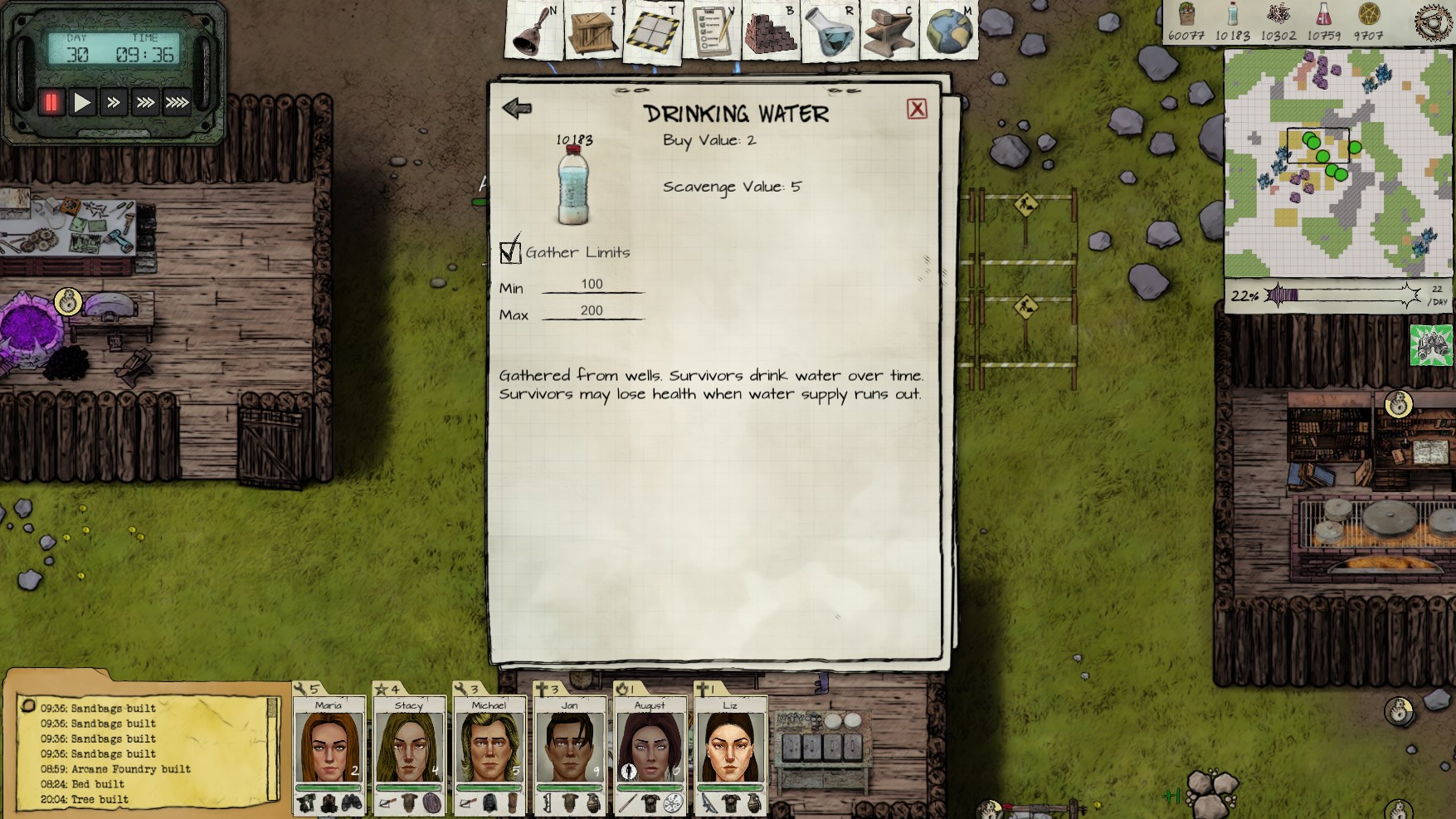 Other usability improvements include being able to directly assign survivors to eat/sleep or craft a specific item by right clicking the bed/table/crafting station. You can now re-roll a single survivor when choosing your starting survivors. A new options window allows tweaking some controls such as mouse lock, edge scrolling, auto combat and so on. A keyboard shortcut (default C) was added during combat to cancel current commands.See the full list of changes below for additional improvements.

Rituals were a bit underpowered, and hence under-used. We re-balanced existing rituals, to make them more worthwhile economically. For example, removing a survivor from farming duty, and instead performing a ritual that improves farming speed, may be more productive than if you let them farm instead. We also added a place for rituals, the “Arcane Foundry”, and several new rituals. Many of these new rituals are not directly related to the economy, providing boosts that cannot be achieved by simple optimization, like improved combat stats and faster map movement. 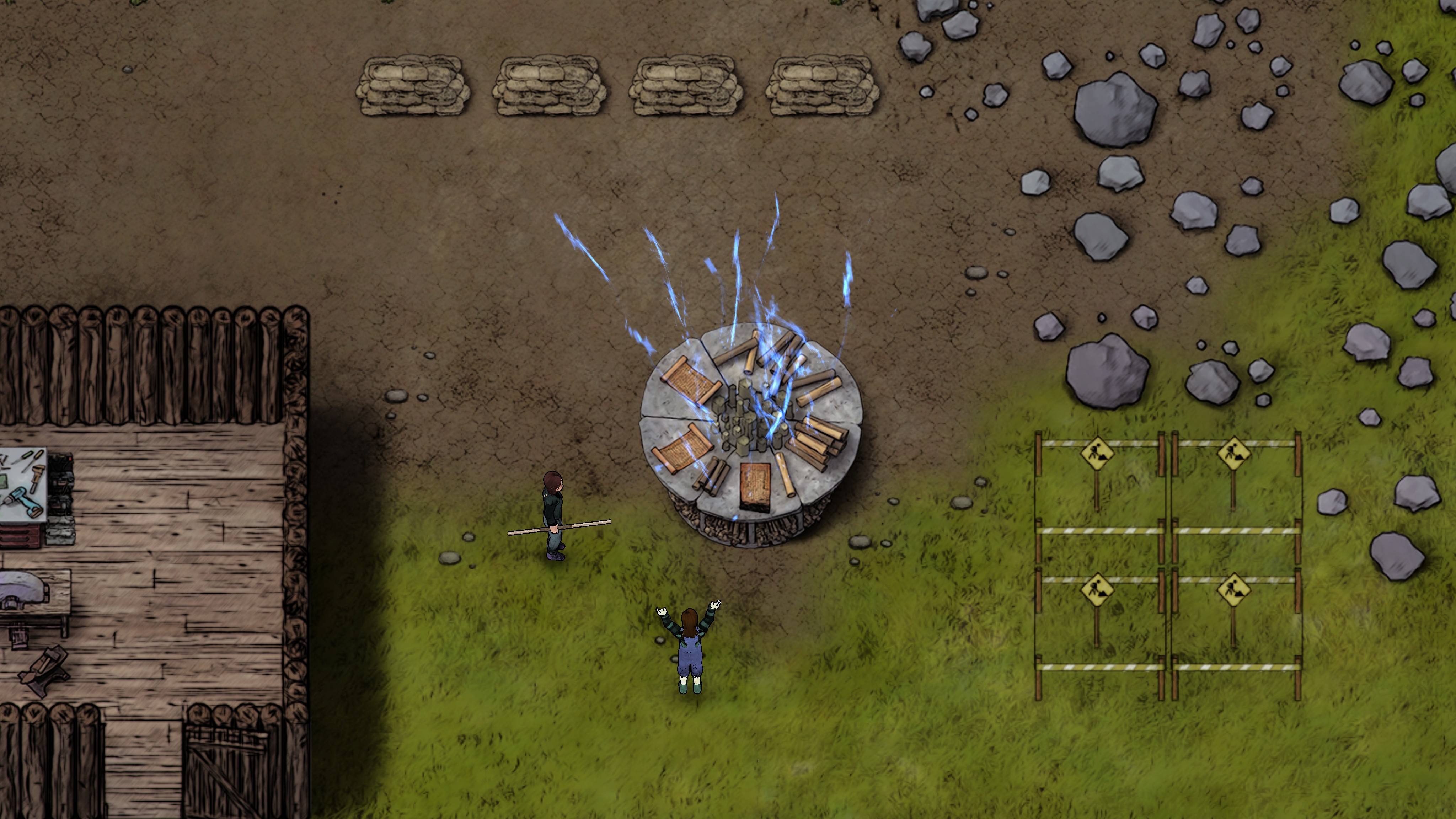 A new combat biome has been added - the military base. Surrounded by fences, blockades and ruined military vehicles, this intimidating maps add new variety to combat.Our end goal is to have enough combat maps and combat biomes so that we can choose a fitting map depending on where the combat takes place, instead of randomly selecting from all available maps. 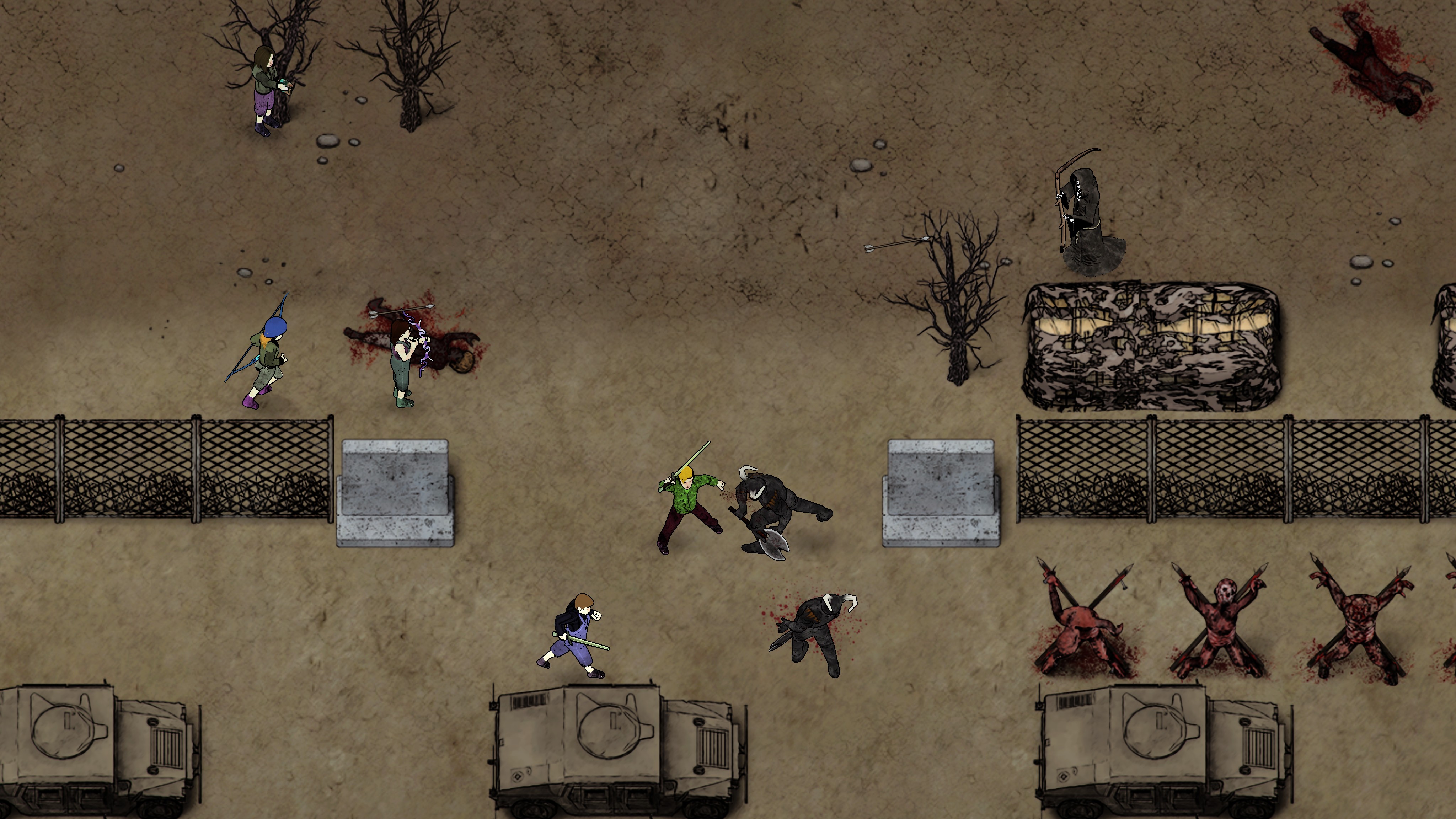 Saved games from update 12 should work just fine. Update 12 mods are very likely to work fine as well, though you may want to tweak item values for trading. See the few backwards compatibility breaking changes.