Steam update 12 includes a whole new world to explore, a complete game rebalancing and much more.

Survivors, the demons have mutated! So has your equipment. Actually, the whole world has mutated and changed, so welcome to the new world of Update 12 - The Explorers.

In this update a lot has changed. The world outside your base has become a colorful, bloody world with many different biomes, all full of demons, destruction and loot. Everything else in the world has changed too, because we have re-balanced the game from scratch. With the addition of new music tracks, improved base visuals and several other smaller fixes, Update 12 is a huge step forward. Want to hear more about these changes? Keep reading. 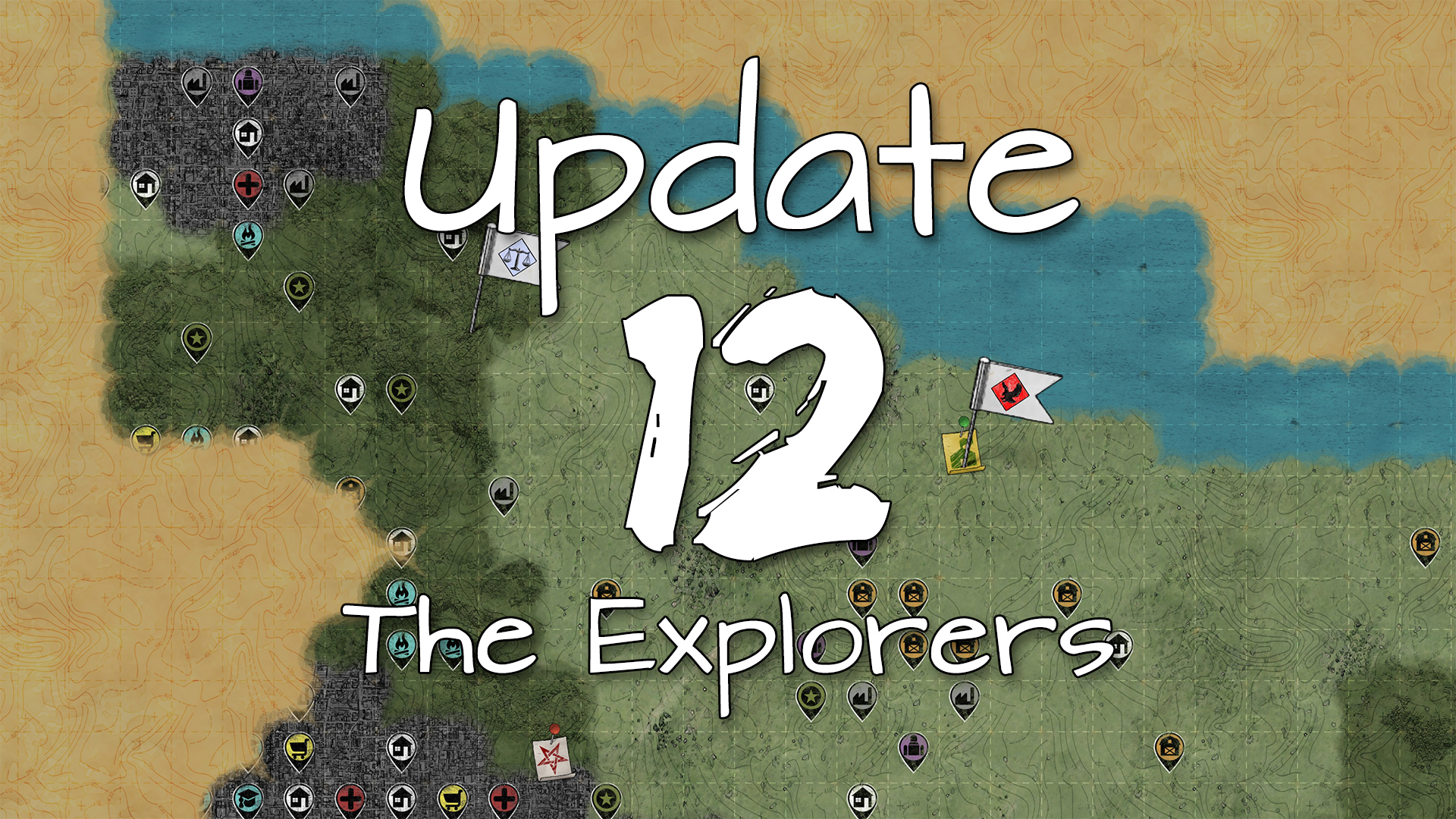 We'll be hosting an IAMA with our founder, tomorrow, in which I'll be answering questions on reddit. Anyone can ask any question.

Judgment has been in early access for over a year now. If you ever wanted to know anything about creating and publishing a game on Steam, this is your chance!

The thread will be created about 20 minutes before the Q&A begins, and we'll also post the link in our website www.judgmentgame.com once the thread is created.

Hope to see you there!

The #1 voted feature of our Feature Voting Trello has been added!

Judgment now has a huge new world for you to explore. You can now create a taskforce and send them to explore the world, where they may find several biomes, each with it’s own unique locations and loot. You can now directly control the task force, and it’s no longer back-and-forth. You can scout a large area or scavenge several locations before returning to base for some rest and healing.

Finding biomes becomes an important part of the game. City biomes, for example, are the place where it’s most likely to find the elusive research materials and research kits, to unlock those advanced technologies. Lava biomes hold obsidian, used to craft some of the most powerful equipment in the game.

The new taskforces are also persistent, making your life much easier. You do not need to re-select your team every time you want to send an expedition. You can assign survivors to task forces, and they will still participate in base chores as long as the task force is located in the base area. Once you send the task force on a mission, they will automatically leave the base area and join the expedition. 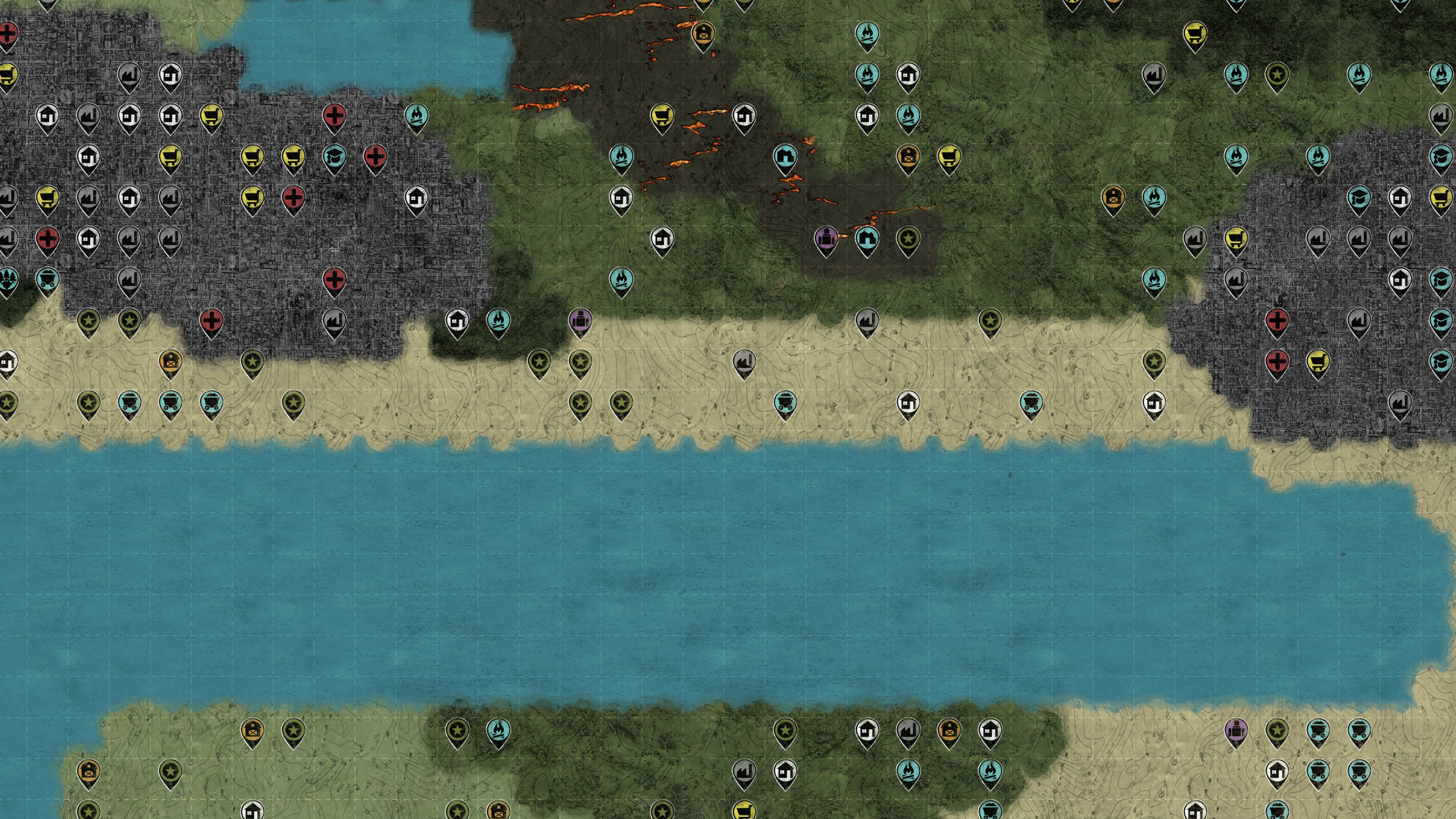 Balancing and difficulty were one of the things players complained about most, since the day we launched Judgment. While we do not intend to make the game easy (at least not in the default challenging difficulty), we do want to remove frustrations and keep the game hard but fair. For that reason, we re-balanced the entire game.

We divided enemies, weapons and resources to tiers and “rarity”, then created guidelines for how much power they have and how much they cost. This change is very dramatic in that higher tiers are far more powerful than tiers below them, so getting new equipment of higher tier is a much more meaningful change in power than it used to be, and a must-have in order to fight higher-tiered demons. These guidelines help us make sure that a survivor equipped with items in the same tier as the demons will be well matched, with a much clearer pace of progression.

Armors have been revamped altogether. They are now essential, and their bonuses are not minimal. Armors determine the base health, evasion and damage mitigation. These base values are then affected by skills and other bonuses, so increasing the base value has a huge effect. Even with very high level weaponry, if a survivor has low level armor they are not likely to survive for long.

There is a rock-paper-scissors-like effect now, as some enemies like the Legion have very high armor and are susceptible to weapons with high damage, while weaker enemies such as hellhounds are dealt with much faster using weapons with high attack rate. Others, like ghosts, have high evasion and will be most vulnerable to weapons with high accuracy. Building a varied team and focusing your firepower on the correct enemy are more important than ever.

Enemy AI has been dumbed down a bit. One of the reasons was to improve performance, but we also felt that enemies focusing on your weakest survivors was frustrating and left little room for tactics. The demons are now much simpler, which you could and should take advantage of. Plan your tactics taking their simpleness into mind, because the strength and numbers will be in their favor.

The pacing of the game has been dialed down a bit. Exploring and advancing takes a bit longer, but the demon armies also take longer to mount full-strength attacks against your base.

These are some of the main balancing changes, but all in all, pretty much the entire game feels different now. We tried to maintain the challenge while reducing frustration and creating a smoother, clearer rate of progression (both for you and the demons). We hope we did a good job, and as always we will listen to your feedback and improve.

Teams of survivors exploring the world may now encounter demons even when they are just walking around. No more sending a single survivor to scout the area. Well, not without risking a gruesome awful death by demons.

The need to send larger teams is mitigated by the fact that teams can explore larger areas before returning to base, instead of scouting a single tile every expedition.

In the full version of Judgment we intend to add more events such as meeting other survivors, ambushes, quests, and more. For now there is only the occasional encounter of hostile demons. 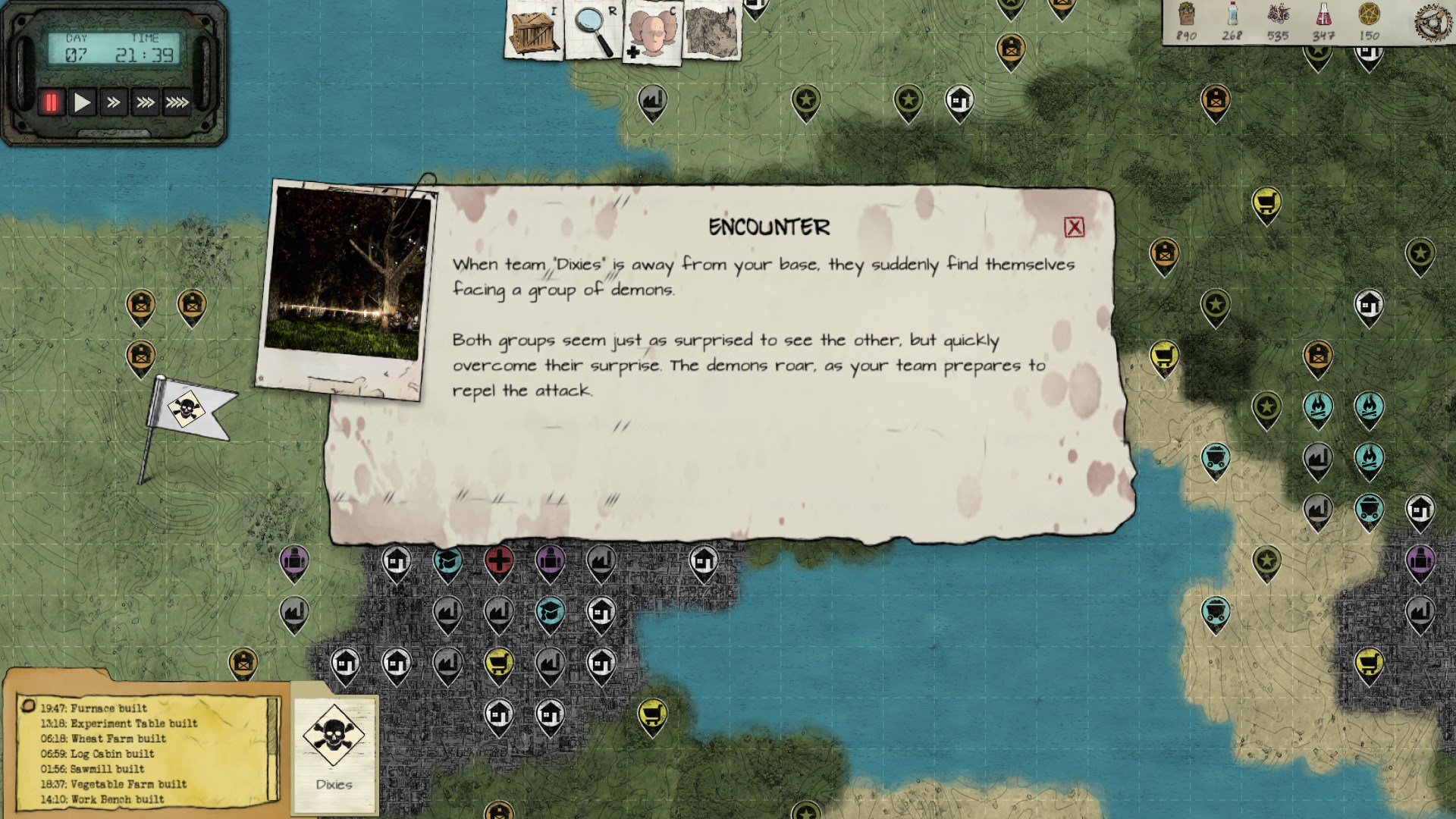 We simplified how food provides bonuses a bit. Instead of having different categories, each with it’s own bonuses, you now receive bonuses depending on the variety of food you have, regardless of what types. So a salad and bread (2 food types) will provide the same bonus as pasta and a sandwich.

In addition, you can now control what food your survivors eat. In a time of relative quiet, where you don’t need those bonuses, you can choose to save some food and only let them eat salads. Later, when you suddenly need the productivity boost, you can change the rationing with all that food you managed to store.

This colony management window also displays all the global bonuses (as opposed to survivor specific bonuses displayed in the skills window), such as those gained by rituals or performing research. 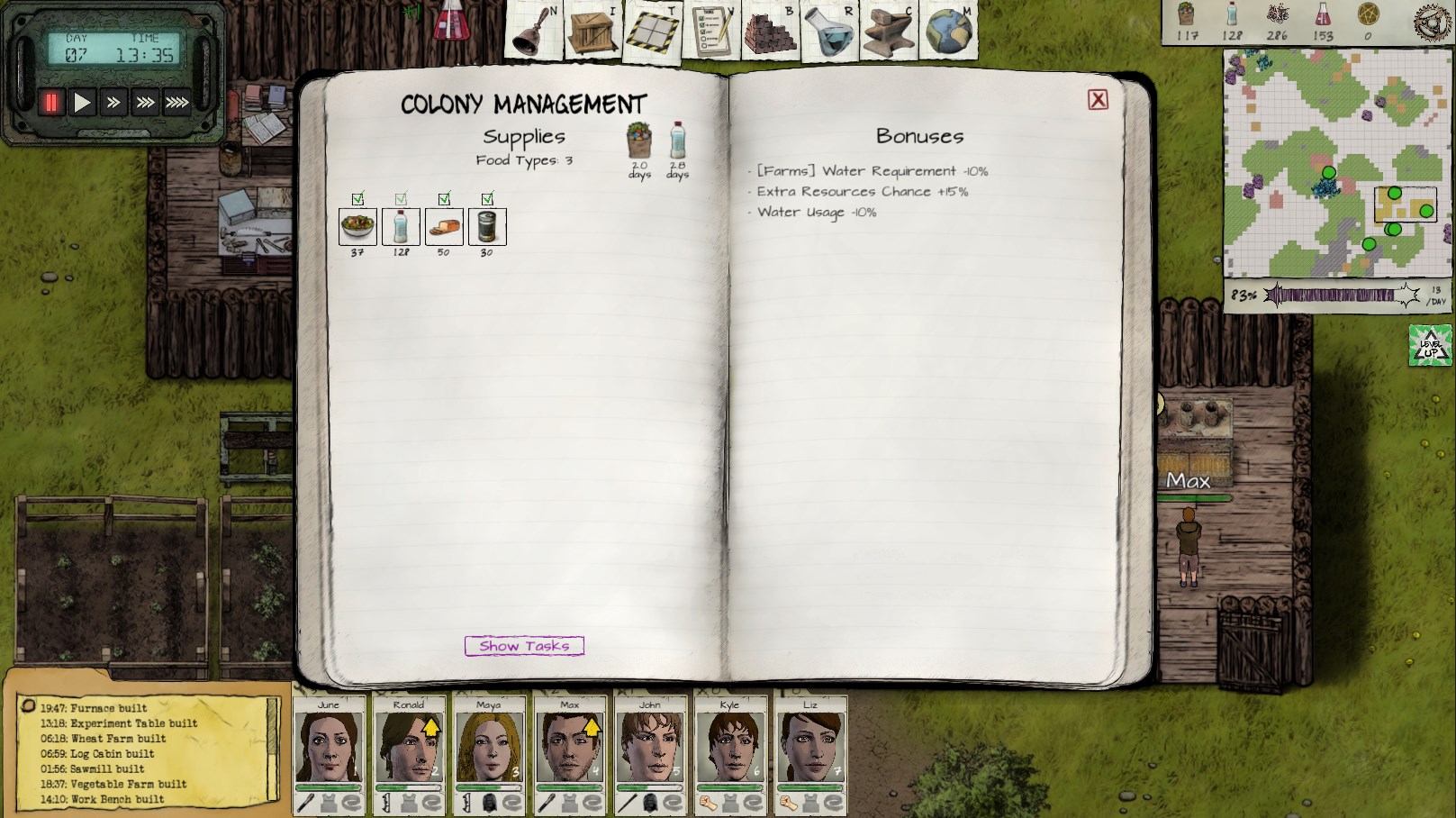 We’ve made some major changes to how Judgment looks and sounds. We made the colors a bit more vibrant and less greyish. While the greyish unsaturated colors we previously had did give a bit of a gloomy feel, they made our visuals a bit boring and we had a hard time adding variation. Most of these changes will be noticed around the base, where we changed the terrain and many of the assets, but there is also some effect in scavenge regions.

As for audio, we’ve added a whole lot. We replaced the regular game music with something a bit more fitting for a survival game, and we added a new, separate soundtrack for the night. There are also new short music clips after combat, and when your colony is destroyed. 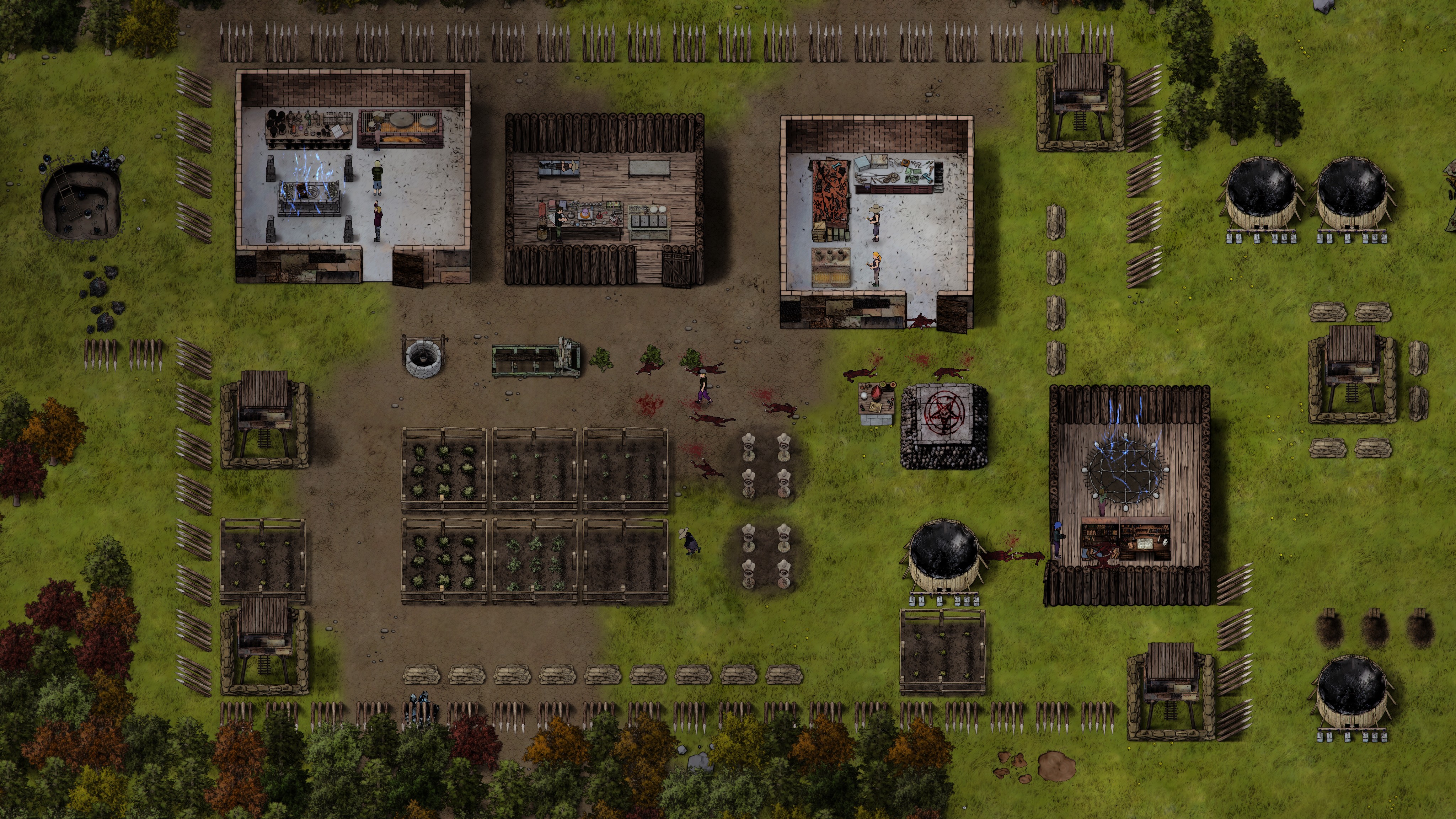 There are lots and lots of new stuff in the game. Many of them are related to the new biomes, there is a new resource per biome that can only be found there, and at least one piece of new equipment that requires said resource. There are plenty of new research technologies which are now also divided into categories for ease of use.

A new fire imp has been added, this demon you will encounter very early and can attack from afar, but is rather weak and easy to kill.

There are new barrel walls that you can build in your base to block enemy fire as well as their advance. You will no longer have to resort to building a maze of log cabins to defend your base.

Since armor got a new important role in the game, there are many new types of armor for all stages of the game. 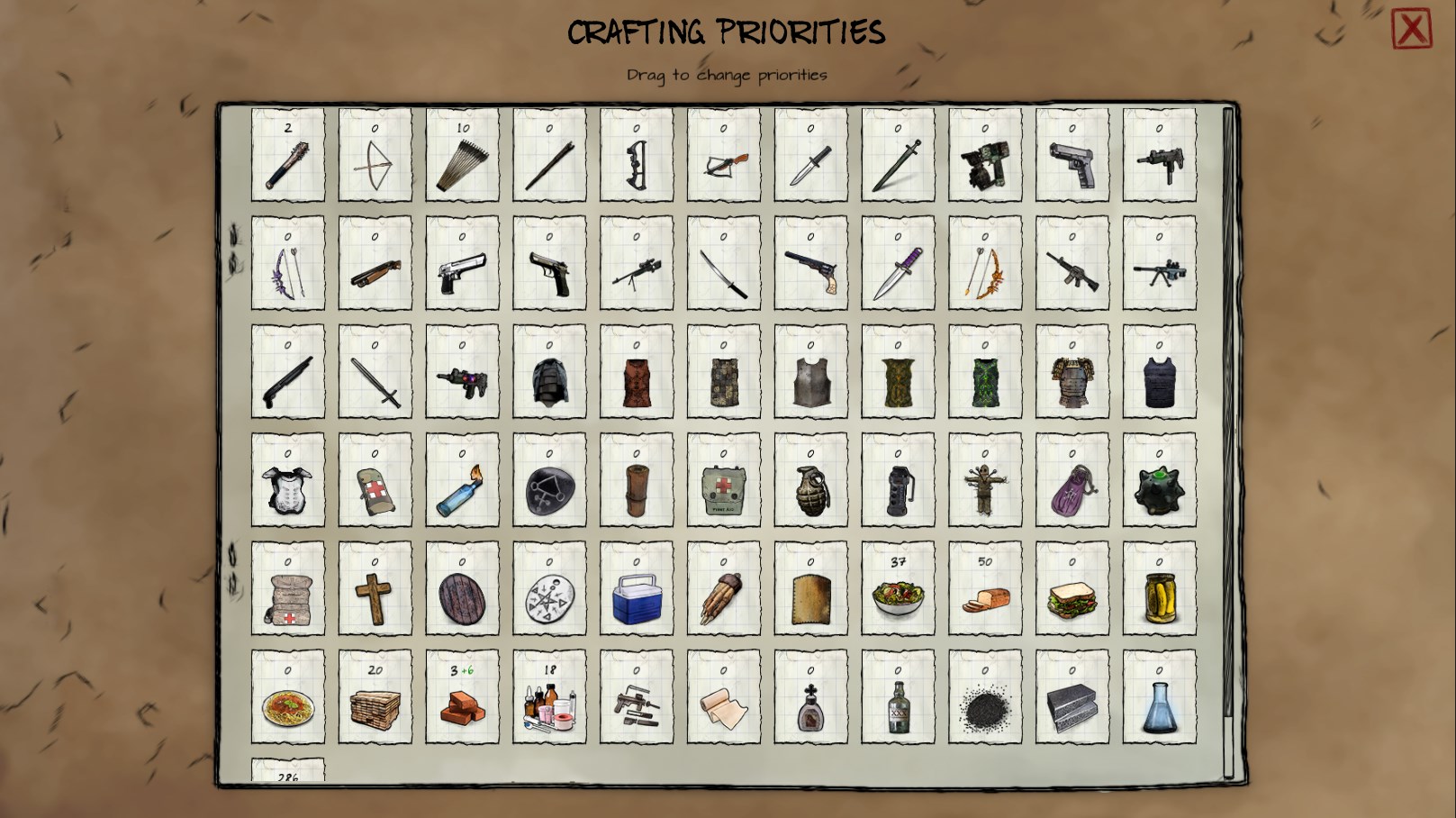 One of the few technical issues that we had in previous builds of Judgment was the game lagging badly when hordes of demons attacked your base, if you managed to surround it with buildings or spikes, and the enemies had to go around those to reach you.

The reason for this lag was mostly due to the pathfinding that enemies used. Part of it is the enemy AI that tried to choose the best attack position, so we had to calculate the distance to all the possible attack positions. The simplified AI no longer needs to calculate all these options.

In addition, we implemented some new, more advanced, pathfinding techniques which improved performance dramatically. All of this together, in all of our tests, solved the lag issue altogether.